Maybe having more than 800 kilometres of shoreline had something to do with Prince Edward County council’s decision to expand its fire department into ice-water rescue. Until February, the Prince Edward County Fire Department was limited to shore-based rescue, which is not uncommon in rural Ontario today. 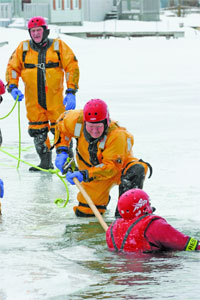 Maybe having more than 800 kilometres of shoreline had something to do with Prince Edward County council’s decision to expand its fire department into ice-water rescue. Until February, the Prince Edward County Fire Department was limited to shore-based rescue, which is not uncommon in rural Ontario today.

Prince Edward County, which is located east of Toronto and south of Belleville, is a popular summer tourist destination and, with its many beaches and campgrounds, may be best known for its famous Sandbanks Provincial Park.  Fishing is also popular in “the county” but not only in warmer weather. Ice fishing is also extremely popular. For those reasons the decision to expand the department’s emergency response into ice-water rescue was an obvious one.

Prior to Fire Chief George Pettingill’s retirement in June 2006, council approved $90,000 from the Ontario government’s fire service grant to be used for the implementation of this badly needed service. This grant enabled the department to purchase its three Fortuna ice rescue boats, 15 Ice Commander water-entry suits, 48 Force Six life jackets, hundreds of metres of new rope and countless tools.

In 2007, Fire Chief Scott Manlow was charged with developing and implement a training program which, in the long run, would see his 140 volunteers and five full-time firefighters all trained to respond to ice-water rescue calls. It was decided to contact the Ontario Fire College with a request for delivery of an ice-water rescue course on site in Prince Edward County. While the OFC has an accredited course that is taught at the college in Gravenhurst, Ont., it made sense to deliver the course in the area in which the firefighters would be responding. This may have set a precedent for future training. The green light was given, the dates were set and the ice-rescue portion of this course was delivered  in February to 14 volunteer firefighters, (two from each of the seven fire districts) and the five full-time firefighters.

Two months before the February course, the 19 participants were given study binders and pre-course assignments. Before being accepted into the course, they had to pass qualifying swim tests and prove their proficiency at tying several rescue knots. According to Ontario Fire College instructor Bill Hammond, the dedication and commitment of the team members was obvious as the classroom lectures got under way. “We knew the firefighters had completed their pre-course work as answers to our questions came fast and feverish,” Hammond said. Hammond was joined by instructors Terry Harrison and Jeremy Parken. This set the student/instructor ratio for this very technical course at about six to one. From the warmth of the indoor classroom, the team moved to an outdoor classroom at Wellington Harbour.

As it turned out, the February training weekend was one of the most blustery of the winter. But, as Hammond told the course participants, “you may have to work in this weather, so you might better train in it.”

After suiting up, the firefighters experienced first hand the feeling of falling through the ice as one by one they dropped into the freezing water. Instructors watched closely for anyone showing any signs of duress. Over the next two days the firefighters trained in all aspects of ice-water rescue, from self rescue to single- and multi-victim rescue. They trained to perform rescues from the ice surface if the victim were conscious and to enter the water to help the victim or victims get out and to safety. They trained in the use of the Marsar sling, the Marsar rescue sled and the Stokes floating rescue basket, and in the deployment of the Fortuna rescue boats. To wind up this portion of the training, the participants were treated to the warmth of a classroom for the final hour, when they wrote their exam.

In early July, instructors Hammond, Harrison and Parken returned to Prince Edward County to deliver the warm-water portion of the course. Again, the 19 participants had to complete pre-course assignments and all were tested in the classroom on their knot-tying abilities before hitting the water. Early on the Saturday morning, the classroom moved to a large, water-filled quarry where all involved had to prove their ability to tread water and swim long distances. They also learned proper water-entry techniques, proper use of throw bags, how to deliver medical attention and how to place a victim into a Stokes basket while out in the water. Then, all the students went through several rotations of rescuing a victim and bringing him to shore. Once the basics had been delivered the training moved onto the southern shores of Prince Edward County for the balance of the weekend.

Since “the county” is surrounded by Lake Ontario, the college instructors felt it was imperative that the rescuers be trained to work in the conditions that Lake Ontario is known to deliver. That summer weekend, waves more than a metre high pounded the shoreline. Training started out with one-person rescues, during which one tethered swimmer swam out and brought the victim back to shore. Later, the team was challenged to perform multiple-person rescues using the Fortuna rescue boat. While extensive training took place on what to do in the water, the team was also trained in what to do while on shore as all activities need to be carried out at the same time and in a team effort. Safety was also a key part of all the training that was delivered. Not only were the students continually reminded of the importance of safety, but the instructors demonstrated it as well. During all the hours of in-water training, never once was safety compromised. While training in the water there were always two instructors in the water watching over the exercises.

To wrap up the final portion of the training, the students had to write one last exam. Just a few short days after the completion of the course all 19 firefighters were informed that they had passed with flying colours.

Since that hot July weekend, our 19-member team has started to deliver the training to the other members of our seven fire districts. Eventually, the majority of our 145 fire fighters will be trained. “We are extremely pleased and proud of our 19 department members who completed this course,” said Fire Chief Scott Manlow. “The commitment and dedication they showed during the seven months of training was just incredible.  To the Ontario Fire College, their instructors, and to the 19 members of this team, we say thanks.”

Robert Rutter is deputy chief of the Prince Edward County Fire Department. He was a volunteer firefighter for 24 years, serving six years as captain and training officer in Wellington District.


Members of the volunteer fire department in North Hatley, Que., plunged into the chilly water of Lake Massawippi in April for an ice-water rescue exercise. Eleven firefighters donned water-rescue suits to test the Polar 75 rescue device, made in Windsor, Que., by Nautic & Art Corp. (www.nacorp.ca/)

Despite the extensive training, rescue operations are sometimes deemed too dangerous for even the most highly skilled rescuers. North Hatley firefighters recall the unpleasant and frustrating experience of not being able to rescue a snowmobiler who had gone through the ice on a local river. A rescue operation was deemed too dangerous because the water was murky and the current was too strong.

Unfortunately, the operation turned into a recovery rather than a rescue but it is one of just four such fatalities the firefighters can recall in the last 10 years. 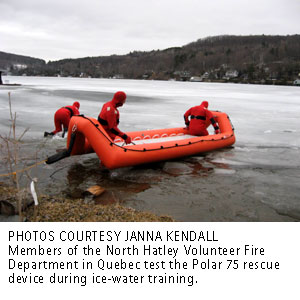 North Hatley is a small lakeside village nestled in the mountainous Eastern Townships of Quebec. Its firefighters still carry lightweight and effective wooden ice picks made years ago by local woodworker Wally Browning at the request of former Fire Chief Steve Coles.  Janna Kendall, a folk artist based in North Hatley, Que., is available for commissioned art work including limited-edition prints or notecards featuring your fire department. She can be reached at janna@globetrotter.net.