An emergency responder called in to assist at a major fire arrives to find a sea of dark shirts. Who is in charge? This scenario is a common occurrence across North America, where many fire and police chiefs have swapped their white shirts for dark blue or black. 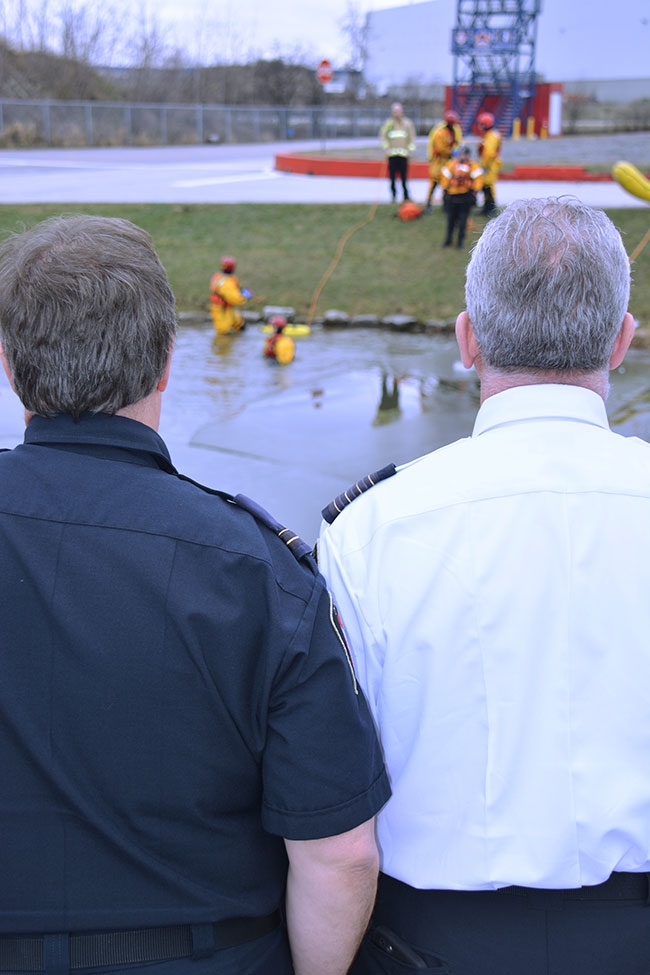 White shirts were part of the standard uniform for fire chiefs but in 1990 police departments in the United States began switching to darker attire Who is in charge?

A 2016 study from the University of the Fraser Valley (UFV) in British Columbia may prompt chiefs to reconsider following this trend.

“We’re not saying with 100 per cent certainty that white is necessarily a superior colour to dark blue or black in terms of sending the right message,” said Darryl Plecas, lead author of the study titled “Whether You’re a Police Chief or Fire Chief Switching from a White Shirt: What’s the Big Deal?”

“However, what the research does suggest is that officers – and chiefs in particular – should be easily distinguished from the rank and file, both by members of their own organizations and by the public. In North America, white is the colour that has traditionally been chosen to make this distinction.”

White shirts began making an appearance as a sign of status more than a century ago. As Dean Brough of Australia’s Queensland University of Technology noted in his 2013 thesis on white shirts, the historical and cultural significance of the formal white shirt, for both men and women, gives it iconic status.

For many years, white shirts were part of the standard uniform for police and fire chiefs – an instantly recognizable sign that the individual was in a position of responsibility within the organization. Police departments in the United States started changing the shirt colour of their officer uniforms in the 1990s, and since then, numerous police and fire departments across North America, and around the world, have followed suit.

The reasons for the switch varied; Baltimore County Police in 1996 said the intent was to make officers less of a target at night and therefore safer. New York Police Department Commissioner Bill Bratton said white shirts were adopted to convey “authority, competence and professionalism, while making our officers look trimmer and cleaner.” Nevada’s Elko Police Department explained its switch to white shirts in its 2014 annual report: the new shirts “increased the professional appearance of the officers as well as their morale.”

When the Greater Sudbury Police switched to black shirts from white in March 2016, Chief Paul Pederson told CBC News the aim was to show that all officers are working together. Canadian fire departments that have adopted the trend include Calgary, Edmonton and Saskatoon, whose chief officers have been photographed in both white and dark shirts on different occasions.

Still, not all have been convinced of the benefits of switching. London Metropolitan Police Commissioner Sir Paul Stephenson told the Daily Mail in 2011 that he is “very passionate about continuing to make sure Met officers look like Met officers in white shirts.”

In British Columbia, white is still the prevailing shirt colour for the 18 executive members of the Fire Chiefs’ Association of British Columbia. As well, across Canada, most of the fire chiefs for the country’s 12 largest cities still appear in white shirts, including Toronto, Montreal, Vancouver, Ottawa, Mississauga, Winnipeg, Brampton, Hamilton, Quebec City and Surrey.

The UFV study argues that the trend toward dark shirts for leaders could be problematic for a number of reasons:

The study asserts that there are more significant and tangible ways for chiefs to demonstrate leadership and support for the rank and file than simply by changing shirt colour.

“A chief’s leadership ability must evolve and grow with the role and its responsibilities,” the study says. “Symbols like shirt colour that identify the chief as the team leader can instill a sense of ownership with the role. Effective leaders embrace their uniforms as a symbol of status that instills pride for the rank and shows an assumption of responsibility.”

According to “The Psychological Influence of the Police Uniform” by Richard Johnson, published in Police.com News in 2005, research supports the benefit of a light shirt as part of the uniform. Specifically, Johnson notes, research shows that a police uniform that is half dark (e.g., with a light-coloured shirt), rather than all blue or black results in higher ratings of warmth and friendliness.

In recent years, there has been evidence that the decades-old trend toward dark shirts may be waning. In the United Kingdom, for example, the Norfolk Constabulary made the decision to switch from the black shirt to white in 2012 based on independent academic research that identified that people view the traditional police uniform as being “more professional, honest, and approachable,” a spokesperson told the BBC.

As well, in 2015, the Indianapolis Police Department decided to have its command staff shift to white shirts from blue. In its statement, the department said the change was to ensure “accountability, professionalism, and transparency… at the front of our day-to-day activities.”

The study “Whether You’re a Police Chief or Fire Chief Switching from a White Shirt: What’s the Big Deal?” may be downloaded in PDF format from cjr.ufv.ca.

Len Garis is chief for the City of Surrey, B.C., an adjunct professor in the School of Criminology and Criminal Justice at the University of the Fraser Valley, a member of the affiliated research faculty at John Jay College of Criminal Justice, and a faculty member of the Institute of Canadian Urban Research Studies, Simon Fraser University. Contact him at LWGaris@surrey.ca

Larry Thomas is a deputy chief for the City of Surrey. He has 26 years of firefighting experience. Contact him at LSThomas@surrey.ca