An elevated heat signature is picked up in a Collingwood, Ont., home and an emergency alert for a structure fire is sent to the communications centre in nearby Barrie. Dispatch notifies the local fire department members through their cell phones, transferring the co-ordinates and fastest route to the scene to their GPSs. 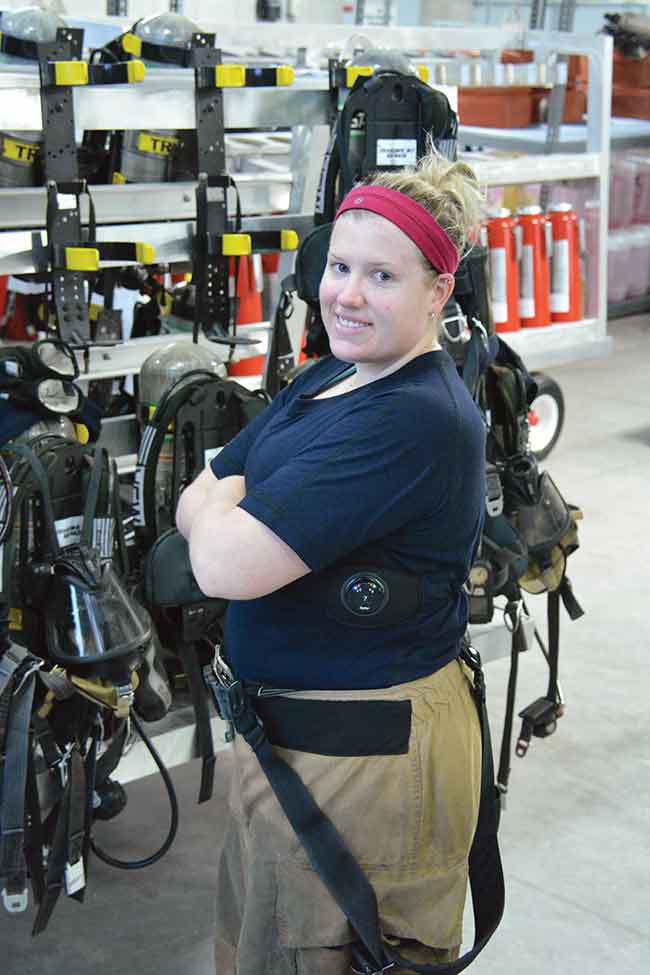 Bruce Power firefighter Terri Allen wears Globe’s WASP (wearable advanced sensor platform).Technologies such as WASP may be slow to catch on in the fire service Biometrics

Dispatch sends out a drone to size-up the scene and forwards any relevant social-media images and videos of the fire from Twitter and Instagram to the firefighters’ phones.

The firefighters suit up, grab the necessary equipment and jump in the trucks. En route, the team accesses the building plans for the house – (this home was not built with now-enforced residential fire sprinklers) – information on the residents, and the current conditions of all occupants via motion sensors in the home and on their persons.

The trucks’ routes are optimized by firefighters tapping into the town’s lighting grid, stopping traffic to allow the emergency vehicles to fly through.

By now the incident commander has drone footage of the house and is planning an initial strategy for a rescue; sensors show two occupants are still inside.

Upon arrival, the team deploys with its instructions, which are relayed to members from the IC via Google Glass built into their SCBAs. A rescue team has a real-time visual of the blueprint of the home, complete with a locator for the occupants inside and a heat signature identifying the fire. Wearing sensor equipment built into their PPE that monitors heart rate, breathing rate and skin-surface temperature, the firefighters enter the house, locate the occupants and perform the rescue.

Meanwhile the IC connects with the nearby hospital for patient triage, while keeping an eye on the screen that shows the occupants’ and firefighters’ conditions. The IC informs the hospital that the occupants are in their 80s and have mobility issues.

Once the occupants are removed, the suppression team begins attacking the fire while monitoring fire growth, environmental conditions and water supply on their Google Glass.

The drone is recording the scene for future analysis and training.

Once the scene clears, the Barrie communications centre collects and stores all relevant information and updates the countrywide database.

■ Back to reality
Presently all of the technology mentioned above exists or is possible, but it’s not widely used or, more importantly, interconnected. An umbrella term for the interconnection of technology and the real world is cyber-physical systems (CPS).

Casey Grant is the executive director of the Fire Protection Research Foundation – the research arm of the NFPA. He has been enthusiastically studying CPS for years and is one of the authors behind the Research Roadmap for Smart Fire Fighting, a report from the foundation and the National Institute of Standards and Technology. The project launched in 2013 and the more than 200-page roadmap came out in June.

Grant admits that even after years researching new applications of technology and data in the fire service, the roadmap is overwhelming.

“The challenge is that the sky is the limit,” he said. “As we look into the crystal ball and we see what people are doing and it’s dazzling; and the potential to do more is only as far as our minds can go.”

Technologies are continually being developed with more and more potential, but they are created as separate systems and not interconnected, which can overwhelm users.

The same can be said about data collection. There are innumerable sources of data, from cell phones to smoke alarms, but the data is not processed or delivered in ways that can be easily applied to fire services.

There have been examples of successful implementation of data systems – such as New York City Fire Department’s FireCast 2.0, a comprehensive risk-assessment database – but the municipalities are doing so from scratch, in ways that are not be easily duplicated.

Grant describes the issue as the cart before the horse.

■ Collecting, processing and delivering data
Collecting data, Grant said, is the easiest step to understand and is already happening to some extent with smoke detectors, visual reports and 911 dispatch.

But a wealth of other data is becoming available and is, for the most part, untapped by the fire service.

“You name it, there are sensors on everything now, including on individual people with their handheld devices,” he said. “We are in this incredibly, ever-increasing sensor-rich world.”

Processing the data, in most cases, Grant said, is less straightforward.

An example is fire modeling – real-time structure models that are accessed on a fire ground to display the incident, monitor and even predict the evolution. NIST has a fire-dynamics simulator program that is free to download. The latest version of the program was released in 2013, but it is continually being fine-tuned.

The third step is delivering the data. While delivery sounds simple, it is perhaps the most difficult process, Grant said.

On the fire ground, where plans are constantly changing and the entire command structure is built within minutes, there are dangers in giving firefighters too much information at once.

“Data has to be delivered to them for what their tasks and job duties are,” Grant said. “Whether they are an incident commander or the person with the hoseline, or they’re the fire marshal beforehand or the fire investigator after the incident, or whoever it is . . . you cannot drown them in it.”

Delivery is the task at hand for the fire service, Grant said. There’s no lack of good information, the challenge is determining what firefighters need at the moment and eliminating the excess, distracting data.

For example, almost all available firefighters’ personal equipment operates independently. Firefighters must switch their focus between items, such as their BA monitors, radios, and TICs. And each item has its own battery.

The roadmap recommends in its conclusion that there is a need to develop a single effective operable platform for electronic safety equipment on firefighters (think astronaut suit). The platform would combine PASS, thermal-imaging cameras, SCBA electronics, GPS, physiological monitoring, augmented-reality displays (e.g. Google Glass), and so on.

The WASP equipment combines location tracking with physiological monitoring in the form of a wearable T-shirt.

The WASP team, led by Globe, has been developing the technology for eight years, which is a common length of time for wearable technology to go from an idea to an executed product, King said.

The WASP T-shirts are available for purchase and – since Fire Fighting in Canada reported on it in September 2013 – are mass-produced to help offset costs. Canada’s Bruce Power fire department is in a testing phase to purchase the technology (see sidebar for more details).

He agrees that the future challenge for manufacturers is to produce interconnected technologies that are easy for firefighters to use on the ground.

“Learning to take all this technology and integrating it is, I don’t want to call it pie in the sky because it really has to be a target,” he said. “It comes back to what’s going to make the firefighter safer.”

Bruce Power firefighter Terri Allen wears Globe’s WASP (wearable advanced sensor platform).Technologies such as WASP may be slow to catch on in the fire service

■ Back to the future
In order for the smart firefighter to be realized, Grant said, it will take a village. Everyone, including the manufactures, regulators, insurers, researchers and even the volunteer firefighter, has a role to play in the process.

Some of the best examples of organizations capitalizing on data are during large events such as the Boston Marathon or Tour de France. Emergency organizations are forced to communicate and co-ordinate data to get a clear picture of the situation and deal with emergencies accordingly.

With extra manpower and funds, emergency crews at large-scale events can tap into rich data sources such as social media, Grant said. Those sources need to be available for firefighters on the ground.

Part of the solution, according to Grant, is standardization – such as standardizing how sensors should function and what data they should provide. That, of course, is where the NFPA comes into play.

NFPA 950: Standard for Data Development and Exchange for the Fire Service came out last December to address operable information sharing. Its companion, NFPA 951: Guide to Building and Utilizing Information, is due out soon.

“There is a lot going on with all the different aspects of this topic – smart fire fighting – and NFPA 950 is sort of a gateway document to really try to clarify how all the information is pulled together,” Grant said.

For example, a standardized date-time stamp, which is a tiny but crucial detail, Grant said, to communicate between different levels of communication.

An inevitable challenge for the NFPA is that technological advances keep leapfrogging standardization.

Canadian regional director for the NFPA Shayne Mintz has been touring North America learning more about data application in the fire service and presenting on the NFPA’s strategies. He hopes the NFPA can work with Canadian fire associations to help standardize data development, management and sharing.

On the ground level, Mintz said, NFPA 950 and 951 are a way to help communicate the scope of CPS potential for the fire service.

“It’s a matter of heightening people’s awareness of what is out there in terms of data and how it can be used,” Mintz said.

The smart fire fighting roadmap also serves to communicate direction to fire stakeholders and, unlike standards or guides, is a living document that will be reviewed and updated as technology is developed.

Representing Propel, King took part in a workshop for the roadmap held in March 2014 with representatives across industries, from researchers to educators to government.

“The dialogue in the room was really quite exciting,” she said. “You kind of got to see the edges of the future and how it can come together in a bigger picture than, say, specific smaller efforts by individual companies or an individual product.

“It’s visionary,” King said, “but honestly, at the same time, we’re actually working in this reality already. It’s closer around the corner than one might realize.”