A 911 call comes in and soon police, fire and ambulance services are independently speeding to the scene of a major car crash. Is this the best use of these expensive and limited emergency resources? This is the very question raised by a new study published by Oxford University Press that analyzed more than 100,000 calls for service over a three-year period for emergency service providers in British Columbia. 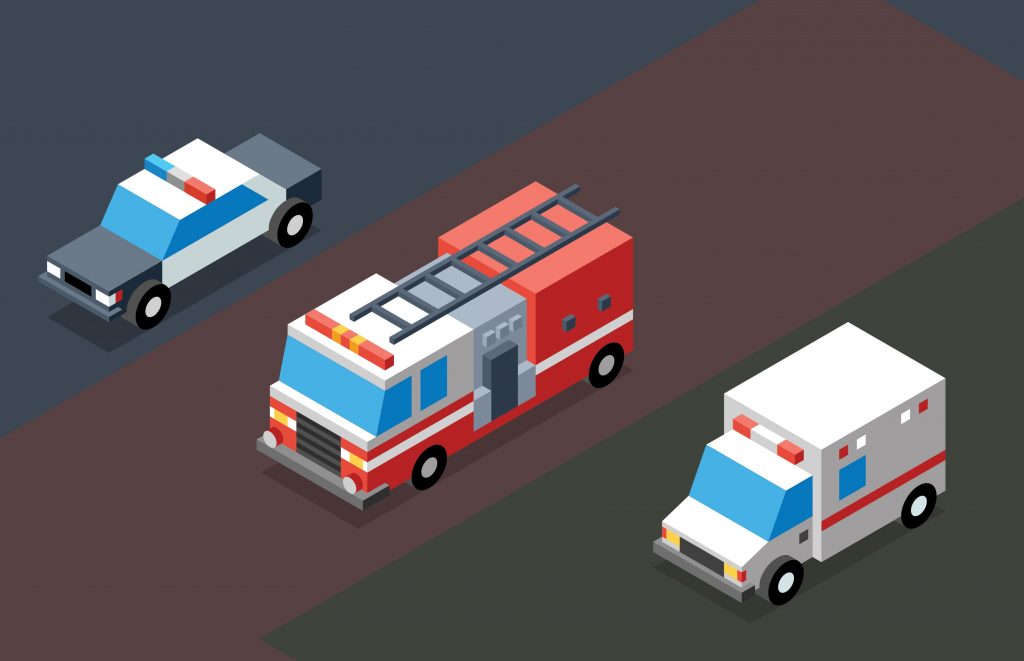 A recent study has called for greater collaboration between emergency services. A 911 call comes in and soon police

This article’s authors plus Michael Townsley and Daniel J. Birks of Australia found a measurable overlap in police, fire and medical calls in their 2017 study Patterns of Police, Fire, and Ambulance Calls-for-service: Scanning the Spatio-Temporal Intersection of Emergency Service Problems.

Using call data from 2011 to 2013 in the City of Surrey (a community of 500,000 in Metro Vancouver), the study found marked similarities in not only the types of problems approached by the three responders, but in their locations and time.

This bolsters previous research showing that much of what the police deals with is not crime, much of what the fire service deals with is not fires, and that paramedics deal with a wide variety of call types. Further, police, fire and ambulance calls tend to cluster in meaningful ways with respect to time, location, income levels and other factors, and research has shown that targeted interventions based on recognized hot spots can be effective in reducing crime, fires and medical incidents.

“This study underscores what Canadians can see for themselves: that there is a general lack of coordination between the police, fire and ambulance services in our communities,” said Paul Maxim, a Wilfrid Laurier University professor known for his criminology research. “As demand for emergency services continues to rise, it is more important than ever that we pay attention to research that shows us how we can better use our existing resources.”

The findings suggest that Canadian decision-makers have something to learn from other nations that have moved towards a more unified approach to emergency services. Christchurch, New Zealand, for example, has a co-located police-fire-ambulance service. The United Kingdom took the concept further with its 2017 Policing and Crime Act, which enables police and crime commissioners to take over governance of fire and rescue services, and introduced a duty on emergency services to collaborate to improve efficiency and effectiveness.

The researchers, who hail from Murdoch University and Griffith University in Australia and B.C.’s University of the Fraser Valley, used three core data sets related to police, fire and ambulance calls for service in the period between 2011 and 2013 in Surrey.

The police data related to recorded volume crime (residential and non-residential burglaries, shoplifting, and theft of and from motor vehicles) and vehicle collisions from Surrey’s detachment of the Royal Canadian Mounted Police (RCMP). Both fire and ambulance data came from Surrey Fire Services’ (SFS) calls-for-service during the same timeframe, with calls grouped into fires, alarms, gas leaks, assistance and medical calls (the largest response category). SFS, which attends all 911 medical calls, also records incidents co-attended by the BC Ambulance Service, which provided the third data set.

After eliminating data-entry errors, the data sets contained approximately 50,000 crime incidents, 28,000 medical incidents and 26,000 fire incidents. All three data sets included incident type, time and location information, which was applied to varying scales to identify major patterns of service-demand intensity (time and place), as well as agency overlap. Preliminary analysis showed that one-third of the geographic area of the city experienced almost three-quarters of the incidents responded to over the three-year period.

Targeted analysis of this high-density area was undertaken. Using a series of spatial lattices (varying in size from 250m, 500m, and 1,000m) and considering calls for service across three time windows (the full three-year period, annual counts, and monthly counts), call densities across the three services were analyzed to look for convergence in time and space. A consistent pattern emerged across all of these time-space grids showing that police, fire and ambulance incidents were concentrated both in time and location, with the top 10 per cent of calls accounting for almost 50 per cent of incidents across all three services. In addition to this, there was a large degree of convergence in the top 10 per cent of cells across the calls responded to by the three services.

The interagency analysis provided by the study is also consistent with established methods that help police forces implement targeted problem-prevention strategies based on known hot spots (commonly known as problem-oriented policing, or POP). POP can be implemented through the SARA model, which involves Scanning (identifying and prioritizing potential jurisdictional problems), Analysis (examining the problem using all available data), Response (designing and implementing creative, targeted, problem-specific interventions that build on interagency strengths and capabilities), and Assessment (evaluating the process and impact of the response).

In particular, the study techniques align with SARA’s scanning phase, and would be an efficient means for agencies to work together to identify and characterize hot spots for collaborative problem intervention. Such a collaboration could leverage existing infrastructure to address common problems that fall beyond the purview of single agencies operating in isolation, and would be more insightful and efficient than independent analysis by the agencies.

It should be noted that there were limitations to the study’s approach, based on the data sources (e.g., the use of only publicly-available RCMP statistics, as well as SFS statistics to represent the medical data set).

That being said, the methods do not diminish one of the key takeaways from the research: the factors that contribute to problems – and in turn, service demand – are somewhat consistent regardless of incident type (crime, fire or medical). This could be a starting point for identifying the prolific consumers of emergency responder resources and working collaboratively on inter-agency solutions.

Prior to the study, little published work existed that confirmed the overlap in time and location for calls-for-service between the various emergency service providers. The authors hope the findings serve to further the discussion in Canada about ways to increase the collaboration between emergency responders, and lead to solutions that improve the efficiency and effectiveness of both the responses and the use of this valuable resource.

To view the study in full, visit Policing: a Journal of Policy and Practice doi.org/10.1093/police/pax038

Len Garis is the fire chief for the City of Surrey, B.C. and an adjunct professor in the School of Criminology and Criminal Justice at the University of the Fraser Valley, Affiliated Research Faculty at John Jay College of Criminal Justice, New York, and a faculty member of the Institute of Canadian Urban Research Studies, Simon Fraser University. Contact him at LWGaris@surrey.ca. Dr. Joseph Clare was the strategic planning analyst for the Surrey Fire Service between 2010 and 2013. He is currently a senior lecturer in Criminology at Murdoch University, Western Australia and holds adjunct positions with the School of Law, University of Western Australia, and the Institute of Canadian Urban Research Studies (ICURS), Simon Fraser University. Contact him at j.clare@murdoch.edu.au.