After a long fight, including a partial collapse, the incident was successfully concluded without mishap. 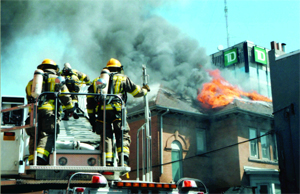 While the address information reported was incorrect, fire fighters in this city found the building in question in mere moments anyway. After a long fight, including a partial collapse, the incident was successfully concluded without mishap.

Kitchener Fire Dispatch received a 9-1-1 call reporting the smell of smoke in the area of King Street near Water Street in the downtown section of the city at 14:21 hours, Sunday, May 16, 2004. Pumpers 2 and 5, Aerial 2, Rescue 1, and Acting Platoon Chief Steve Usher responded to the alarm.

Pump 2 arrived in the area on King St. W. and reported nothing visible. The buildings along this stretch of King Street have several businesses side-by-side at street level with walk-up apartments above them on the second floor.

The buildings back onto a mid-block service alleyway known as Hall’s Lane that runs parallel to King.

Crews quickly checked three separate addresses along King Street and could not find any signs of smoke or fire. P5 was instructed by radio to check the rear of the structures off Hall’s Lane. Almost immediately, P5 reported smoke coming from the attic of an attached two-storey house, two buildings east of the address from where the initial alarm was reported. Command immediately requested P1 to respond to the scene to act as the RIT team.

A2 crew members pulled a 100mm line to a hydrant located 50 metres from their truck and raised the platform in preparation for master stream operations or to provide a water source on the roof. On the King Street side, P2 secured a hydrant and advanced two 38mm attack lines through the building in front of the involved building to the second floor to cut off fire extension from the attic to the attached, main building.

Meanwhile, the P5 pump operator dragged a 100mm supply line back to Francis Street while his crew members were advancing two 38mm lines into the structure on the Hall’s Lane exposure.

The BOX 690 fire department canteen arrived on scene with a crew of six at 14:40 and set up two rehab sites, one on King and the other on Hall’s Lane.

Access limited
A4 was dispatched to the fire at 14:45. Interior crews were unable to make much progress in controlling the fire as access to the attic was limited.

Fire fighters opened up the roof at the E1 exposure facing King Street and used the two lines from P2 to attack the heavy fire from the roof. An additional line was stretched from the platform. P5 fire fighters fought the fire from E3 on Hall’s Lane side of the building on the second floor, but the fire had a good hold in the attic.

A4 was set up in Hall’s Lane and the two aerials made a co-ordinated attack on the attic. This proved to be a successful tactic as the fire was quickly darkened. Fire fighters then moved back into the building and used handlines to overhaul hot spots, once it was determined the building was safe from further collapse.

Under control
The blaze was held to the building of origin and declared under control at 16:20. P1 and A4 crews picked up and returned to their station. Night shift crews replaced day shift staff for Pump 2, Pump 5, Aerial 2 and the Rescue 1 and overhaul continued until 19:00. A2 remained on scene throughout the night on fire watch.

Fire prevention Chief Randy Kalan investigated the fire with assistance of the Waterloo Regional Police. The cause has been listed as undetermined, but is believed to be electrical in nature. Damage had been estimated at $350,000, and 20 tenants were displaced from their apartments.

Postscript: In a follow-up to the incident report in last November’s edition, “Veneer plant challenges,” it has been reported that regional police arrested three teenagers Feb. 14 in connection with that fire. They were 13 and 14 years old.  Visit www.firefightingincanada.com/ Current_Issue for more images from this incident.

The department
Fire protection for the City of Kitchener’s 190,000 residents is provided by 200 full-time fire fighters staffing six stations, under the command of Fire Chief Rob Browning and Deputy Chiefs Gary Mann, Don Trask and Tim Beckett. Frontline apparatus consist of four 5,000-Lpm (1050-Igpm) pumpers, one 8,000-Lpm (1750-Igpm) pumper, one 23-metre (7,000-Lpm) quint, one 31-metre (7,000-Lpm) quint, one 30-metre (6,000-Lpm) quint platform, one 9,100L tanker, one heavy rescue, one haz-mat truck and one platoon chief’s van. All trucks have built in A and B foam systems except for three of the older pumpers which only carry A foam. The department has two 5,000-Lpm reserve pumpers and a spare heavy rescue.