News
Your Call: Slacking off may be symptom of larger issue

Your Call: Slacking off may be symptom of larger issue
Steve Kraft’s Your Call column is generating exciting and enlightening feedback. Have your say. 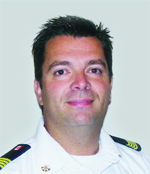 Editor’s note: Steve Kraft’s inaugural Your Call column appeared in the February issue of Fire Fighting in Canada and on our website, www.firefightingincanada.com. Due to publication deadlines, we were unable to put replies to the first column into this issue but they are on the website. The dilemma posed in the February issue is below, along with Steve’s response.

February scenario: One of your firefighters approaches you and asks for a few minutes of your time. He starts explaining that every time there is work to be done around the fire hall, firefighter Lansing is nowhere to be found. Everyone recognizes that Lansing is a good firefighter but people are becoming frustrated with his lack of participation. How would you handle this situation?

There aren’t many officers who haven’t had to deal with a firefighter who doesn’t appear to be doing his share of the work. In the scenario outlined above and in February, a firefighter has approached you and told you about the situation.

Unfortunately, in this case, it looks like a firefighter has been able to consistently “hide” from work. It has been my experience that at some point, every fire house faces this challenge. This kind of work avoidance can be the result of several factors but in many instances the firefighter might not even be aware that his lack of action is disrupting the team. Although this may seem simple to some, one of the reasons people often don’t do better is because they don’t know better. If nobody has actually told this guy that he isn’t pulling his weight then we shouldn’t be surprised when behaviour continues – we have silently encouraged it or, in the very least, condoned it.

If the officer doesn’t sit down with the firefighter to discuss the unacceptable behaviour, it isn’t likely to change. Sure, it’s easier to sweep the problem under the carpet but this is a temporary solution. If this issue isn’t dealt with early and appropriately it will fester and then it will become a much bigger issue.

The officer needs to have a private meeting with the firefighter as soon as possible. During the meeting, the firefighter needs to be told why the meeting is happening. I don’t recommend an officer say “a firefighter has come to see me to complain about you.”  It would be more effective to say: “I have noticed . . . ”  You are the officer and you are responsible for the crew. Make sure the firefighter understands why you are having the conversation. Don’t be vague; outline exactly what behaviour needs to be corrected. Tell the firefighter how his efforts (or lack thereof) are being perceived. For example, I would say something like “Dave, I have noticed that every time the crew gets up to roll hose you don’t participate. Is there a reason for this? Are you aware that you’re doing this?”

In situations like this, it is important to be a good listener. For the most part, you will probably hear a reason why the firefighter isn’t participating with the crew. It could be a problem at home, in which a reminder about an employee assistance program would be recommended. You will probably hear that the firefighter feels that he does other activities – for example, he always does the dishes – and nobody helps. There might even be a personality conflict among the crew.  Whatever the reason, the behaviour needs to be nipped in the bud.

These are the types of issues that good officers handle at their level. Too many times, inappropriate behaviour goes unchallenged and a firefighter is permitted to avoid work, which is disruptive to the team and may be blown out of proportion.

It is always important to end the discussion on a positive note and let the firefighter know that you understand his concerns. But it is equally important that he understand your expectations and the consequences, should the behaviour continue. If the firefighter has legitimate concerns about other firefighters on the crew or at the station then it might be time to talk to everyone. This would indicate there are bigger issues that need to be flushed out.

Every situation is going to be different but one thing that is consistent is that issues need to be addressed. Officers are responsible for the crew and must deal with issues promptly. If dealt with properly, the officer will have a group of firefighters who not only respect him, they will enjoy coming to work.

Steve Kraft is the deputy chief and a 19-year member of the Richmond Hill Fire Department. He has completed the certificate in fire service leadership though Dalhousie University and is a graduate of the fire protection technologist course at the Ontario Fire College. He is a certified Community Emergency Management co-ordinator and is enrolled in Western University, where he is completing his diploma in public administration.