Most North American fire departments use adequate fire flows at private dwelling fires. However, this same flow is also used for fires inside large, un-compartmented, high-fuel-load commercial buildings. Commercial buildings require the use of a 2 1/2-inch (65-millimetre) hose, not just for its higher flow capabilities, but also for its stream reach and thermal penetration. 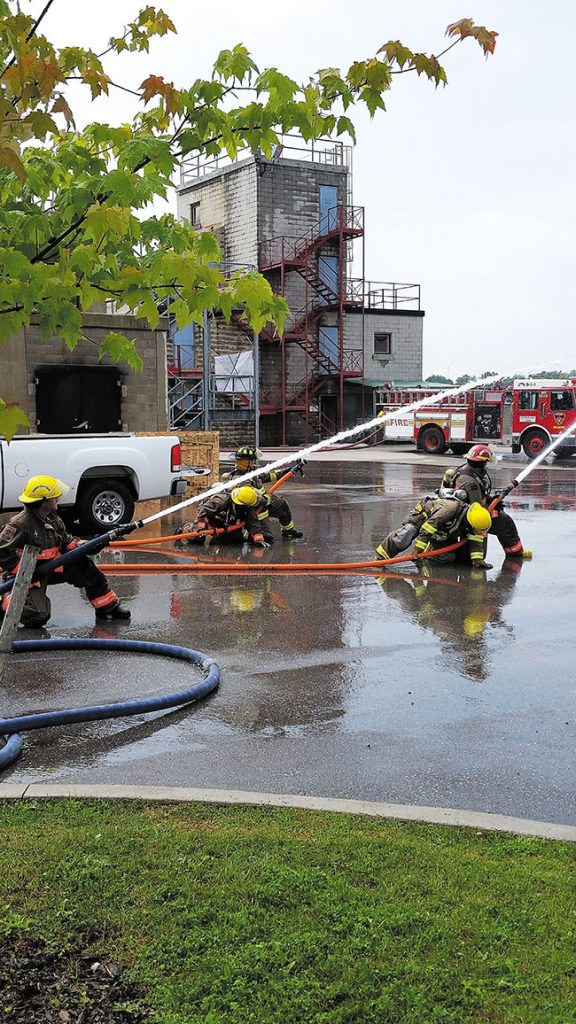 On March 14, 2001, the Phoenix Fire Department in Arizona responded to a fire at the Southwest Supermarket. Bales of cardboard had caught fire outside the supermarket with fire extension into the supermarket’s storage room. Crews stretched two 1 1/2-inch (38 mm) hand lines through the supermarket to the storage area. As crews advanced hoselines into the storage room, smoke and heat conditions in the supermarket began to deteriorate. One of the members of Engine 14, Brett Tarver, became low on air and had to exit. While attempting to exit, Tarver lost contact with the hoseline, became disoriented, and ran out of air. After Tarver’s death, the Phoenix Fire Department did a full investigation and released a report on the incident.

The report recognized failure to control the fire as a contributing factor and gave this recommendation:

When considering fire growth and the gallons per minute (GPM) needed to control a one- to two-room fire (250 square feet), it is approximately 80 GPM. In a large open room (which could equal 3,000 square feet), the fire flow could be up to 1,000 GPM to control the fire. The GPM must overpower the size of the fire. Attack line selection must not always be based upon what’s easiest or what’s fastest, but the correct size (GPM flow) to control the fire. That ‘correct size’ line is not for the size of fire you see now, but the prediction or forecasted fire growth that will happen during the time it takes to deploy and operate that line.

The report correctly points out that fires in commercial buildings, with high fuel loads and massive supplies of air, can grow so rapidly that the fires are capable of outpacing one or even two 1 3/4-inch hoselines within minutes of fire department arrival.

This is what happened in Charleston, S.C., on the evening of June 18, 2007, when a fire broke out in packing material and discarded furniture outside an enclosed loading dock at the Sofa Super Store. The fire quickly spread to the covered loading dock that contained furniture, wood framing, liquid hydrocarbon solvent and flooring. From the loading dock, fire and smoke extended into the main showroom.

“The fire overwhelmed the interior attack,” the National Institute for Occupational Safety and Health (NIOSH) report says, “and the interior crews became disoriented when thick, black smoke filled the showrooms from ceiling to floor . . . Interior firefighters were caught in rapid fire progression and nine firefighters from the first-responding fire department died.”

Similar to the firefighters’ actions during the supermarket fire in Arizona, Charleston crews attacked using 1 1/2-inch hoselines. In both cases, the fires originated outside the buildings, and firefighters tasked with checking the buildings for fire extension found a light haze along the ceiling upon entry. Based on this observation, many firefighters would not expect to find a rapidly escalating fire extending into the building. Both fires illustrate why hoseline selection is so critical.

Lack of fire-behaviour training
Current fire-behaviour training fails to demonstrate the relationship between flow rate (the heat-absorbing capacity of water) and heat-release rates. In Ontario, the Fire Service Health and Safety Advisory Committee is revising the firefighters guidance note #6-6 Flashover to recommend fire departments develop a fire behaviour-training program for their members. This revision is being done in response to a NIOSH recommendation to the NFPA to consider amending NFPA 1001 and NFPA 1021 to include more comprehensive fire-behaviour training for fire officers and firefighters. Currently, North American firefighters receive little training on fire behaviour. When firefighters understand fire behaviour, hoseline selection becomes a decision based on anticipated fire conditions and heat-release rates, rather than what is easiest to stretch. At a minimum, firefighters must accept the fact that fires release thermal energy. A fire stream that does not have a sufficient flow rate to absorb the fire’s thermal energy will not control it.

The concept of firefighting flow-rate requirements can be theoretically based in matching water-flow against known rates of heat release (a given flows capacity to absorb thermal energy) in compartment fires. It can also be empirically based upon given fire loads, in established floor space, against water flows needed to suppress fires during their growth or decay stages (the latter generally being a defensive application).

NFPA 1710 Standard for the Organization and Deployment of Fire Suppression Operations by Career Fire Departments, recommends a flow rate of 300 GPM from two hoselines. This flow rate is widely accepted by the North American fire service, with many fire departments using two 1 3/4-inch hoselines to achieve this flow. The private-dwelling tactical flow rate proposed in NFPA 1710 is based on the National Fire Academy’s (NFA) fire-flow formula:

Using this equation, the NFPA’s private-dwelling tactical flow rate was calculated for a 2,000-square-foot house. The resulting flow rate includes a back-up (safety) hoseline. The NFPA selected 50 per cent involvement because an interior-attack strategy is generally not used for buildings with a higher percentage. This tactical flow rate is an overestimation of needed fire flow at most private-dwelling fires, which provides an important safety margin for interior-attack operations. Experiments conducted by Underwriters Laboratory and National Institute of Standards and Technology (NIST) show heat-release rates in modern, private-dwelling fires to be five to 15 megawatts.

The adjusted cooling capacity of a 150-GPM fire stream is 12 megawatts. Interestingly, the NFPA’s recommended private-dwelling flow rate coincides with the cooling capacity of water for expected heat-release rates at private dwelling fires. Current field fire-flow formulas for large commercial buildings are less reliable due to a number of variables, including ceiling heights greater than 10 feet (three metres). Fire loading also varies greatly among commercial structures. Something all commercial buildings have in common is an enormous supply of oxygen, which translates into much higher heat-release rates than a private-dwelling fire. When NIST remodeled the Sofa Superstore fire, its researchers found heat-release rates had reached 85 megawatts on the loading dock shortly after the fire department’s arrival.

In Ontario, the health and safety advisory committee has attempted to address the issue of safe commercial fire flows in Guidance Note 6-26 Structural Fire Fighting – Fire Streams and Ventilation:

Firefighters and officers should understand critical flow rates (the minimum flow in litres or gallons per minute required to extinguish a given size fire) and the effects of nozzle-stream patterns when determining the type, size and number of lines required to control the fire as quickly as possible. Fire departments should establish minimum flow rates for residential fires and for commercial building fires. Commonly accepted critical flow rates for residential fires are 570 litres per minute (150 GPM) and 950 litres per minute (250 GPM) for commercial building fires.

Unlike the residential flow rate recommended in NFPA 1710 Standard for the Organization and Deployment of Fire Suppression Operations . . . , the guidance note fails to account for a back-up safety hoseline. Some fire chiefs argue they can meet the recommended 250-GPM commercial flow rate by stretching two 1 3/4-inch hoselines rather than the 2 1/2 inch. This tactic is critically flawed as it fails to account for a back-up line. Meeting the 250-GPM flow rate with 1 3/4-inch lines requires four hoselines. Stretching two small-diameter attack lines will only meet the NFPA recommended flow rate for a two-storey, 2,000-square-foot house. It takes 12 firefighters to deploy four 1 3/4-inch lines, as opposed to the eight members needed for two 2 1/2-inch hoselines. Using the 2 1/2-inch attack line frees up four firefighters for other fire-ground tasks. Secondly, two 1 3/4-inch hoselines are not equal to a 2 1/2-inch line. Pontiac’s Fiero and Ferrari’s Testarossa are both sports cars but obviously do not compare in terms of performance. Compared to smaller-diameter attack lines, the 2 1/2-inch attack line has a far greater reach and a more powerful stream; this allows firefighters to reach the seat of the fire without penetrating as far into a burning building, and to cool structural-steel building components from a greater distance to prevent collapse.

Moving the 2 1/2-inch line
Many fire departments view the 2 1/2-inch attack line as a defensive fire line because it is too heavy to advance and requires too many members to hold while flowing. This problem can be broken down into two categories: training issues and equipment issues. Retired Oakland, Calif., captain Dennis LeGear explained in an article titled “Hose Dreams” published on countyfiretactics.com in 2013, that the modern 2 1/2-inch fire hose is not true to size. When in operation, a modern 2 1/2-inch hose is actually 2 3/4 inches or larger; this can add up to 70 pounds (32 kilograms) of extra water per hundred feet (30 metres) of hose. This increase in hose diameter was driven by the fire service as a result of the introduction of the 100-pounds-per-square-inch (psi) combination nozzle. True 2 1/2-inch diameter, double-cotton-jacketed hose previously had a 50-psi solid bore nozzle attached to the end of it; when the fire service began using the 100-psi combination nozzle, pump-discharge pressure jumped 50 psi. On a long attack hose lay, that jump in pressure was unacceptable, so the industry responded by producing fire hose that offered lower friction losses. To decrease friction loss in the hose, manufacturers did the only thing they could do – they increased the diameter of the hose.

According to LeGear’s article, the only solution to this problem is a change to the NFPA 1961 Standard on Fire Hose to require fire hose be manufactured true to the labelled diameter and remain true to size when pressurized. Furthermore, the need for lower friction losses in fire hose has been eliminated by more effective products from nozzle manufacturers, such as lower-pressure combination nozzles. Another benefit to low-pressure combination nozzles is a considerable decrease in nozzle reaction. The problem with the 100-psi combination nozzle was that much of the fire service attached these to a very large, heavy, brass playpipe; this made the nozzle physically unrealistic for use as an attack-line nozzle. The other problem with using the 100-psi combination nozzle on a 2 1/2-inch hoseline flowing 250 GPM, is that the nozzle reaction is almost 130 pounds (59 kilograms). Using a 50-psi solid bore or 50-psi combination nozzle on a 2 1/2-inch hoseline flowing 250 GPM will produce a manageable reaction force of 70-90 pounds (32-40 kilograms).

Safety on the fire ground is best achieved by extinguishing the fire as quickly as possible. Understanding fire behaviour and the relationship between fire flow and heat-release rate is critical to proper hoseline selection. Fire departments must ensure that firefighters are trained to advance and flow 2 1/2-inch attack lines, and must equip firefighters with low-pressure nozzles so they can flow the 2 1/2-inch line with a manageable nozzle reaction. Firefighters must view the 2 1/2-inch hoseline as an attack line and be willing to stretch it at fires that require higher flow rates. Stewart McMillan, the president of Task Force Tips, summed this up best in an article titled “Fire streams: Fact or fantasy?” on www.tft.com, when he wrote:

Frequently, we are sending in our ‘troops’ armed with a flow that is too small for the job at hand. By the time they call for reinforcements, it is frequently too late. It is my opinion that we should have standard operating procedures that maximize the capability of the attack team . . . Let’s go on the offensive. What does all this add up to? Hit it hard, hit it fast, hit it with all you’ve got!

Jeff Cowen is a full-time firefighter for the City of Sarnia, Ont. His 10-year fire service career includes teaching for the past two years as a part-time instructor at the Lambton College Fire and Public Safety Centre of Excellence. cowenjeff@hotmail.com