Fire Chief Rob Grimwood beamed all day on April 18 when the department threw open the bay doors and welcomed about 100 curious community members to tour the new facility.

“The station honestly exceeds expectations,” Grimwood said in an interview during the grand opening, shortly after he conducted the official ribbon cutting ceremony – or in this case the official hose-uncoupling ceremony – with members of the local council.

The new hall – which came in just under $3 million – houses about 25 firefighters, as well as EMS personnel and administration. It has four truck bays (one of which is used for storage), two ambulance bays, a truck-bay style storage room, energy efficient sensors and lighting, a separate room for the SCBA compressor and one for gear storage, and a diesel-capture system.

“For a smaller volunteer department, with a limited budget, to be able to produce this station on time and on budget, it absolutely feels incredible,” Grimwood said.

Firefighter Melissa Baisley shared the chief’s excitement for the new station, emphasizing the amount of space the crew now enjoys. Before, she said, firefighters would squeeze around trucks just to hang up their gear.

The main reason for the extra space is the storage bay, Grimwood said. The bay houses equipment for the entire department, as well as EMS. Its large bay door, accessed from the back of the station, allows the trucks to back in and easily retrieve equipment.

The new station, which replaces a 54-year-old hall in Cayuga, is one of 12 in Haldimand and was built, in part, to centralize the county’s emergency services administration, including the chief officers. 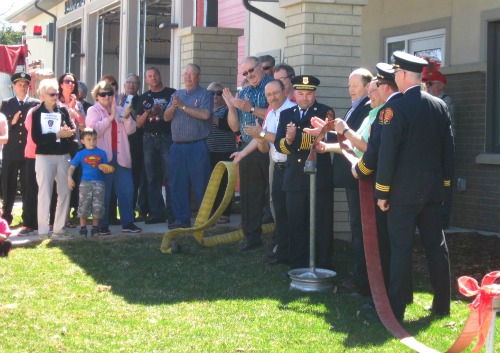