Hiring firefighters has changed from the days when a strong back and bravery were the most prized values of a new employee. 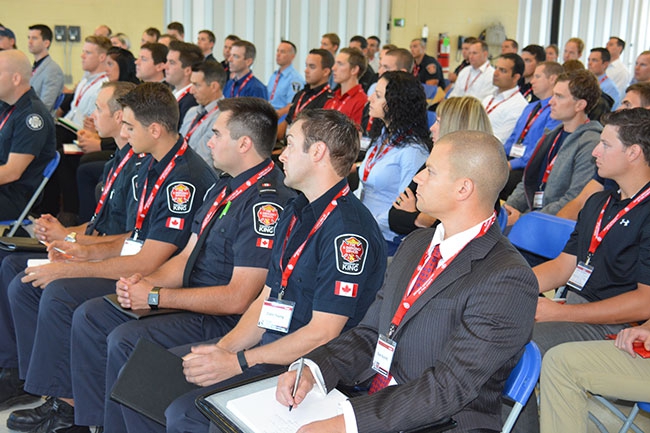 Today, departments look for well-rounded individuals who not only meet the physical and mental challenges of the job, but are also a good fit in terms of personality and leadership potential.

Facing ever-tighter budgets, departments would also be wise to consider long-term human resources issues that could be costly in the future – for example, will this recruit be a likely candidate for sick leave abuse or stress leave in 10 years?

“Pretty much everyone has moved beyond the strong-back test, but not as far as you’d think,” said British Columbia corporate psychologist Bjorn Leiren, who specializes in firefighter profiling, in discussions with Surrey Fire Service in British Columbia.

“It used to be that we hired firefighters to meet the needs of today. Now we have to think about hiring for today, and tomorrow.”

Profiling of firefighters is not new. In a 1976 study for the Office of Personnel Management in Washington D.C., researchers David Bownas and Robert Heckman examined 109 United States fire departments ranging from 25 to 3,000 career members and identified 20 competencies needed to perform typical firefighter duties such as performing rescue operations, forcibly opening structures or enclosures, following standard safety procedures, operating apparatuses, administering emergency care, dealing with the public, and participating in training and education.

The 20 required competencies for these duties included physical characteristics such as strength and co-ordination, cognitive abilities such as verbal communication and logical problem solving, interests such as medicine and construction, and character traits such as courage and teamwork.

Bownas and Heckman were among the first researchers to demonstrate that departments needed to look further than strength and bravery to find ideal firefighter candidates; other researchers have since built on their work to develop more specialized firefighter profiling systems including Leiren, who developed procedures that enabled departments to weigh candidate scores based on their particular requirements.

Over the years, Leiren’s firefighter competency profile system has evolved and pushed the boundaries of profiling. Today’s version not only considers indicators for resilience (such as resistance to anxiety and stress) and socialization (such as counter-productive work behaviors), but also ranks candidates within a certain hiring pool from best to worst. Typically, profiling systems produce an overall rating for a candidate, but do not directly compare one candidate to another.

“Most times the comparison is to a minimum standard, or to the general population,” Leiren said. “They’re brave compared to the average person. That’s interesting, but how do they compare to other firefighters? We want the one who is brave, but not cocky.”

Leiren’s system compares not only the candidates within a certain competition, but also within a database of more than 5,000 firefighters who were previously ranked using the tool.

Each candidate’s ranking also reflects the departments’ unique needs now and in the future, based on their geography, demographics, density of development and other factors. For example, a retirement community may be interested in candidates with a medical background, while a city with numerous high-rises may want candidates who can perform high-angle rescues. A career department whose firefighters sleep and eat together will place a high value on cleanliness and tidiness. The system allows for unique profile characteristics that meet each department’s needs.

Knowing how candidates perform against others in the same competition, and other firefighters in general, helps take the guesswork out of the hiring process. Rather than a pass/fail or a generic ranking, departments that use Leiren’s system can clearly see how each candidate measures against the next, so they can choose the best of the best based on their specific needs.

■  Candidate personalities
While many departments engage in some kind of candidate profiling based on Bownas and Heckman’s early work, some still end up hiring candidates who rank high during their screening but later turn out to be problem employees; the system is not picking up on personality traits that could be indicators of future problems.

Screening for stress indicators has become common, but Leiren noted that valuable information can be obtained by looking more closely at what is happening and why. If the right questions are asked, patterns can be teased out of a candidate’s results. For example, if a candidate ranks high on emotional stability but low on self-esteem, it suggests he or she may start to experience stress-related issues over a period of time (e.g. 10 years) and so should be red flagged.

With on-the-job stress now recognized as a compensable work result in several provinces, many departments are starting to look for ways to reduce their future liability risks.

“Originally stress-resistance was just one of the general competencies, but departments were asking for more clarity around stress resistance,” Leiren said. “It’s part of the model that we’ve expanded because of a perceived need.”

Another emerging area of study is the dark side of candidates, Leiren said – indicators that a candidate is more likely to engage in counter-productive work behaviours at some point in their careers, such as theft, drug-or-alcohol abuse, dishonesty, disruptiveness, failing to meet standards, absenteeism, tardiness and withholding effort.

Delving into this dark side may also detect traits which, when taken to the extreme, could result in problems later, such as perfectionism; usually this kind of screening takes place during the latter stages of the profiling process.

Based on psychological research, these kinds of measures can provide departments with a realistic picture of what kind of employee a candidate may be after a decade on the job. However, Leiren pointed out that personality screening is an inexact science and there are no guarantees a person will behave as expected in the future.

■  Worth the cost?
Using an external candidate-screening tool adds cost to the hiring process, but could also be considered a long-term investment. For example, Surrey Fire Services’ attendance records show firefighters selected through Leiren’s profiling tool are significantly more productive than those selected without the system, to the tune of about $7,000 per person per year (based on increased performance and reduced absenteeism).

Evaluations of the tool’s results against supervisors’ ratings of candidate job performance indicate a predictive validity of r = 0.5; in other words, the tool has about the same likelihood of success as the likelihood that people will weigh more as their height increases. No legal challenges have been launched since the tool was introduced in 1979, and the tool also satisfies Canadian Charter of Rights and Freedoms discrimination requirements; no statistically significant difference has been identified between the final scores of men compared to women, or of visible minorities compared to others.

The City of Surrey, B.C., which has been using Leiren’s profiling tool since 2000,   estimates it saved the equivalent of 10 firefighter jobs in the first decade because of increased productivity and reduced absenteeism.

Many candidate-profiling options exist and results will vary. However, all departments seeking to lower costs without reducing staff should take a closer look at how they are selecting the firefighters who will be serving their communities in the years to come.

Len Garis is the fire chief for the City of Surrey, B.C., an adjunct professor in the School of Criminology and Criminal Justice and associate to the Center for Social Research at the University of the Fraser Valley, a member of the affiliated research faculty at John Jay College of Criminal Justice, New York, and a faculty member of the Institute of Canadian Urban Research Studies, Simon Fraser University. Contact him at LWGaris@surrey.ca

Larry Thomas is a deputy fire chief for the City of Surrey, B.C.; he is responsible for operations, training and human resources, and has 26 years of experience. Thomas has a background in science from Simon Fraser University and economics from Douglas College. Contact him at LSThomas@surrey.ca