Penticton’s fire chief on training, wildfire prepardness and and the joys of the role 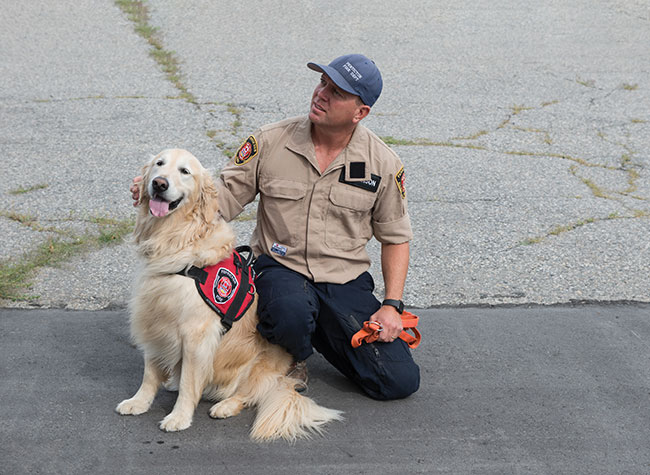 TOP Watkinson and his trained disaster dog were deployed to Nepal in 2013 and 2015 and to the Bahamas in 2019 for search and rescue. All Photos: Mike Biden

Born and raised in Kelowna, B.C., Penticton Fire Chief Larry Watkinson has always loved the outdoors. Who would have guessed that his love for hitting the slopes would have led to such a fulfilling and exciting career in the fire service?

As an Okanagan kid, Watkinson spent summers on the lake and winters on the ski slopes. After high school, he started working in construction but found that was never really his calling.

“I was much more fascinated by that kind of energetic, outdoor lifestyle,” said Watkinson. “I was recruited by Big White Fire Department as a ski patroller and I was immediately hooked. But it wasn’t until David Matteucci, the fire chief at Big White at the time, approached me in 1999 and said — why don’t you think about joining the volunteer fire department up here? — that I really considered fire as a career path.”

Watkinson went to the Vermilion Fire Academy in Alberta, starting his firefighter training in 2000. He returned to Big White as a volunteer firefighter and was promoted to a chief officer’s rank in 2003 that made him responsible for operations and training.

This promotion is what would lead Watkinson to help develop the Work Experience Program (WEP).

The Work Experience Program, or WEP, is a program that helps prospective firefighters enhance their skillset using on-the-job training. While responding to emergencies, their skills, knowledge and experience grow in preparation of advancing towards a career in fire fighting.

Watkinson explained that the idea came about because “Big White, which is a ski resort village, is transient. To have qualified firefighters there for a 10-month period, to develop their skill sets, and give them some exposure to living and working in a fire station to the likes of a career fire department, sets them up to have some skills and examples to help them get through the interviewing and hiring process in other larger municipalities.”

The program is now over 20 years old and still has an 80 per cent hiring rate, said Watkinson.

“Hearing colleagues of mine from across the country say that they’ve hired a WEP guy makes me proud that I had a major part in creating a program that helped the service grow and made it accessible to every station across the nation.”

Fire fighting is a trade, one where you live and work with the same people for the majority of your career. The need to be adaptable is as important as understanding the ins and outs of fire suppression. Being adaptable is a skill that needs to be experienced, and training like the Work Experience Program helps young recruits to do that. Teaching them how to adapt before they’re even involved with a department will help to set the future of the fire service up for success. 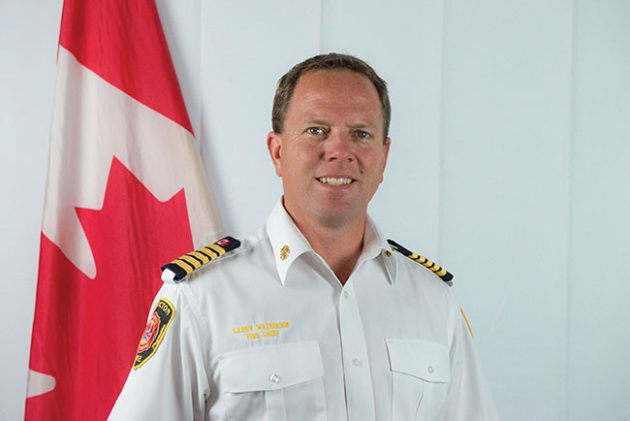 Watkinson left Big White Fire Department in 2006 with a great sense of pride for what he had created and an eagerness to continue supporting and innovating training in the fire service.

He continued on to the Justice Institute of British Columbia training centre, where he was chief of training for the firefighter recruit program.

Shortly after, he moved on to the District of Mission, where he went through the ranks as assistant chief, deputy chief and spent his last three years there as fire chief.

Watkinson’s time with the District of Mission was one of growth for himself and his canine companion, Sam.

A colleague of Watkinson’s, who was with the Burnaby Fire Department as a canine handler, approached him about training his newest puppy as a disaster dog. After doing some research and learning more about what it entailed, Watkinson decided it was something he was interested in taking on.

After a number of years, his dog Sam was trained and qualified to do live scent and cadaver searches with the Burnaby Fire Department Urban Search and Rescue Team. The duo was deployed to Nepal in 2013 and 2015 and to the Bahamas in 2019.

Watkinson describes the experience as one of the most rewarding of his career.

“There is something about going on those kinds of deployments with a team of professionals that are volunteering to help out internationally; it’s a very intense but special experience. I don’t think that it’s uncommon for people in our industry to want to be active and outdoors and contributing to a community. But the self-gratification is a big element too, and I think that’s sometimes forgotten upon us as first responders. Feeling good about what you do daily, and recognizing the impact that you’ve made in some way is, for me, one of the most satisfying elements to the job.”

For Watkinson, this feel-good element is part of what drives him forward to continue building these unique skills sets, and a part of what keeps him in-check with himself and his role.

Watkinson came to the Penticton Fire Department as fire chief in 2016, where he continues to better the service.

“That’s a part of the privilege of being in this role of fire chief. You have the flexibility and momentum to test out new approaches and see how what you’re learning, whether from your staff or from other departments, is helping to better the service,” said Watkinson.

Watkinson used this flexibility to develop a new wildfire preparedness and response plan for the city of Penticton in 2017.

“The plan identifies a step-by-step approach on what to do when wildfires come into our communities. The pre-incident plan for our community took three years to create since its all geo-references and utilizes GIS mapping that helps identify everything, from pinch points to accessibility to water, even down to what keys open which gate.”

The purpose of this plan is simple, and may seem obvious: to inform firefighters on the fire ground. By having everything laid out in a cohesive and comprehensive plan, it can be given to anyone responding to the event within moments.

The plan proved to be hugely successful in last year’s wildfire season. Watkinson was deployed from June to September to assist in managing wildfire teams of over 300 people. Everyone who was deployed came home without any long-term injuries, the damage to equipment was minimal and communities were protected.

Penticton has also invested a significant amount into fire fighting operations. The department has built their own structure protection units and wide-spread wet lines with sprinkler systems to help protect communities.

“I’m very proud to be a part of the fire service, and of my role within it…when I leave this organization and retire, I want to be able to feel good about what I did to improve the industry, whether it’s the people I worked with directly or someone across the nation.”