Sept. 14, 2015, Stratford, Ont. - An Ontario city has passed a bylaw requiring all applicable buildings to display decals that warn firefighters of truss and lightweight constructions.

City council in Stratford, Ont., adopted the bylaw on June 22 with a one-year compliance period for all commercial, industrial, and multi-family residential occupancies.

Stratford firefighter Mike Lukachko, the lead behind the bylaw proposal, believes it is the first of its kind in Canada and said it would not have been possible without support from many partners.

“The assistance and support we got from the local level, the provincial level, the international level, was tremendous,” Lukachko said.

The firefighter built his case around research and data provided by the United States-based National Institute for Occupational Safety and Health (NIOSH). Other essential information and support came from the Ontario Professional Fire Fighter’s Association, the International Association of Fire Fighters, the local union, and a local insurance company.

Lukachko estimates that there are about 900 truss and lightweight constructions in Stratford and they are often difficult to point out. Many storefronts have antique facades, but were renovated with less expensive lightweight components.

As part of the proposal to council, Lukachko determined that emblems for all 900 buildings would amount to just $3,400 – less than $4 per decal – and that the bylaw would not affect building permits or insurance rates.

“We were able to answer a lot of questions before (councillors) posed them,” he said.

Stratford Chief John Paradis said council unanimously supported the bylaw that improves firefighter safety and costs taxpayers next to nothing.

“They didn’t hesitate,” Paradis said. “They actually asked us, ‘What more can we do?’ It’s such a common sense thing because it costs so little.”

Both Paradis and Lukachko said they are more than willing to share the proposal and all relevant research with other departments to take to their councils. 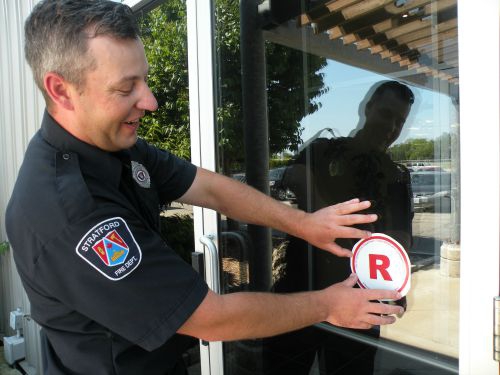 Firefighter Mike Lukachko demonstrates where emblems must be displayed on Stratford buildings that have lightweight constructions.
Print this page