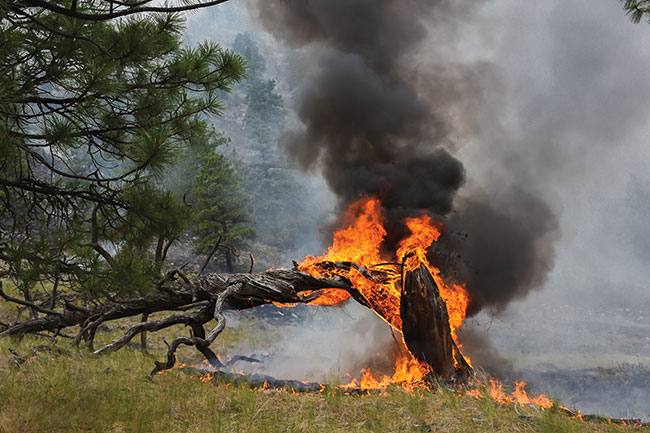 As wildfire season approaches, many wildland fire experts have begun adapting their plans in attempt to best assess and manage the upcoming fire season while the country combats the coronavirus outbreak.

In light of these new developments, the BC Wildfire Service is changing its training model for new 2020 firefighter recruits. As well, several industry events, including the highly anticipated Wildland Urban Interface Symposium in Penticton, B.C., have been postponed or cancelled as a result of the virus.

Jody Lucius is the communications and engagement superintendent for the BC Wildfire Service. She said they have been forced to innovate their model in order to balance public health measures with adequate and effective preparation for the upcoming wildfire season.

“The biggest thing is that we are continuing to work through our preparations for the 2020 floods and fire seasons,” she said. “We do have a mandate to respond and in the interest of public safety, of course, we are doing everything we can to make sure we can fulfill that mandate this year. Part of that is looking at a variety of changes and options in order to help protect our staff and minimize their exposure to COVID-19.”

Typically, new recruits are put through a boot camp in Merritt, B.C., but with self-isolation being advised, sessions shifted to online forums.

Mark Healey, a certified panning section chief for one of the BC Wildfire Service incident management teams, explained that because a lot of the preparation for wildfires includes face-to-face training, social distancing poses a major challenge.

“It’s been a real shift to try to take a bunch of your training that you’ve done for years in a classroom setting and then shift portions of it to an online platform. It’s really hard, especially since we’re not in the business of creating online training,” he said.

Healey said the service is actively working to determine how to properly assess recruits without a physical boot camp or fitness test, which are used to determine which provincial zone to assign them in order to fill the necessary crews. He said service members will eventually have no choice but to meet and train in person. Wildfire season typically begins around May. In-person training must to take place prior to then.

As the COVID-19 situation is changing rapidly, Lucius said the BCWS are taking precautions to ensure the safety of their members. Typically, fire camps house hundreds of firefighters so adjustments have been made in attempt to maintain physical distancing and sanitary regulations. This includes added laundry and shower facilities, hand washing stations and adjusting and adding sleeping quarters.

Lucius also said the service is exploring other safety precautions in attempt to minimize any risk of exposure. However, the BCWS is still in discussions regarding what precautions should be used throughout the upcoming wildfire and flooding season.

The Ministry of Environment and Climate Change Strategy also issued a ban for all high smoke sensitivity zones in British Columbia on March 26. This comes in light of discussions surrounding smoke from wildfires weakening lungs and potentially making people more vulnerable to COVID-19.

“[Burn ban] restrictions are in place for high smoke sensitivity areas, largely kind of highly populated areas within British Columbia,” she said. “We’ve worked closely with them on it and the restriction is largely in place because of COVID-19 and the impacts of smoke on anybody who may have that illness, or maybe kind of at higher risk for it so we are continuing to look at whether we need to expand on any of those restrictions or perhaps put additional restrictions in place.”

Other provinces, including Alberta and Ontario, have also begun planning for the upcoming season. At the beginning of March, Alberta Wildfire issued a news release to alerting the media that wildfire season had started and was expected to last until October. They are also grappling with staffing issues as they often fly in experts and firefighters from other provinces. That may now be complicated by travel restrictions, flight cancellations and layoffs at Canada’s major airlines. Alberta has also implemented fire bans put in place in wilderness areas as a preventative measure.

In Ontario, to ensure public safety and well-being during the evolving COVID-19 outbreak, the province declared a burn ban on April 3, “effective until further notice.”

There are inherent risks with wildland firefighting. Healey said COVID-19 is simply an added inherent risk that firefighters will have to remain aware of.

“Luckily for us, fires aren’t static. They don’t stay in one place in a wildfire setting, so we’re pretty good at adapting on the fly.”