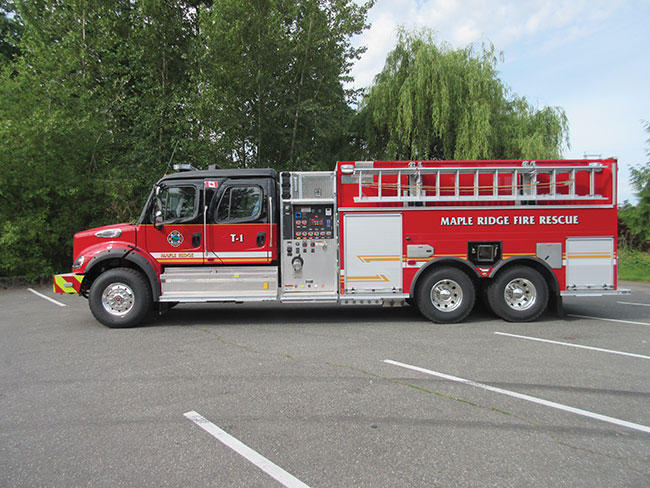 HUB is the oldest fire truck manufacturer in Canada, having rolled their first pumper out in 1959. Photo credit: HUB Fire Engines

In a challenging year for Canada’s fire truck manufacturers, it’s a privilege to spend a bit more ink celebrating the tenacity, longevity and success of our homegrown apparatus and equipment. There are many people who have played integral roles in shaping the landscape coast to coast.

Howard Bradley is one. At 76, he has spent over 60 years in the fire industry through his involvement in Prairie Fire, Superior, and Rocky Mountain Phoenix. His grandfather started Prairie Fire, which sold all things fire fighting, in 1945 and it was passed on to his father. Bradley started full-time in the business around 1963 and sold his first fire truck in 1968. In those days, they were with LaFrance Fire Engine & Fomite, and American company that set-up shop in Cooksville, Ont. Bradley came up through the company with his father’s desire he learn from the bottom up – cleaning toilets and sweeping floors wasn’t something he appreciated as a teenager, but he came to value the lesson. His dad also taught him that you never ask an employee to do something you can’t or won’t do, which left Bradley learning to do everything from filling fire extinguishers to fixing fire trucks.

Bradley went on to serve as a principal in Superior, for about 15 years. Superior Emergency Equipment was founded by Bob Mather, Butch Barthel and Barry Skinner in Red Deer, Alta., in 1973. In 1980, Superior Fire Trucks was founded as a new division based in Kingston, Ont. Superior was eventually bought by Emergency One (E-One), turning into Superior Emergency Vehicles as a subsidiary in 1992.

Six decades has seen a lot of change in movers and shakers, he said. King-Seagrave out of Woodstock, Ont., was once “king” in the west. Canadians were loyal to the Canadian manufacturers then, he said, and smart American companies kept a presence here. That seems to matter less these days, he said, with globalization. Technology, and automation in particular, has changed the fire service.

“But people can’t be eliminated,” he said. “Even if you had a robot to fix a truck you still need a human to agree it was fixed properly…You will always need a firefighter no matter how technically superior the equipment is.”

One of his most heartwarming moments came when a firefighter union president stood up and recognized Bradley as a fellow  brother, acknowledging the importance of good, working equipment to firefighters.

“We really were accepted as part of the fire fighting community. I acted as a pallbearer at a number of fire chiefs’ funerals. They weren’t just my customers, they were my friends, and we shared a common ground in seeing the fire service succeed.”

On the east coast in Nova Scotia, Bob Cuming started Cumings Fire & Safety in 1975, purchasing it from a local resident as a fire extinguisher recharging business. He owned a bakery for nine years as well, and they became too much, so he pared down to just fire and operated out of his mother’s garage for four years. The fire extinguisher business outgrew the garage and he bought a building in downtown Bridgewater, N.S. A friend in the fire business helped him get started, the first year with the store open saw little product on the shelves, he said, which he can look back and laugh at today. His wife Jane worked alongside him in the business, looking after the industrial safety division and general accounting while he managed the fire side. He built up the store, generating a good reputation for carrying the safest gear available to help his friends and colleagues. He sold fire trucks as a dealer for HUB and Superior, getting into every side of the business he could, and went 29 years before selling the business. The company is still in operation under the same name, but Cuming is amazed by the change in costs today. A good aerial used to be $500,000. A good firefighter suit used to be in the $1000 range. No more. He hopes the advancements in technology is what’s reflected in the price, nowadays.

Cuming was a firefighter for 20 years and a deputy chief in Bridgewater. He joined about 1965, an era of cotton coats and plastic hats – about as “unsafe as you could get for the environment you were headed into.” He had to wait nearly two years to get on as a volunteer because the capacity in the department was full — that kind of problem wouldn’t exist for many volunteer departments in today’s tough recruiting environment. When people seemed to get interested in modernizing the safety equipment, that’s when he got interested in having a fire equipment business. He retired after having open heart surgery in 1985, and although he returned to the department, his doctor recommended he step off the active list. Poor health prompted his decision to sell the business as well, and he’s 78 now, “still ticking” he pointed out. He made a lot of good friends over the years, and he said he misses the fine people he’s dealt with in the fire service.

And, back on the west coast, a manufacturing legacy continues to thrive. HUB Fire Engines’ first pumper, built on a Ford chassis in 1959, was sold for $3,500 to the District of Matsqui, which is now Abbotsford, B.C., where HUB resides. Henry Whitehouse, the fire chief in then Matsqui, is HUB’s founder. Whitehouse sold the business in 1973 to Earl Smith, now deceased, and his friend Richard Mannering. Lorne Bunz later joined as a business partner. The company expanded, introducing a mobile service and fire apparatus on different chassis such as GM, Ford and Mack. When Smith left, Bunz assumed majority control and oversaw a decade of tremendous growth, expanding HUB’s reach across Canada, and even as far as Russia.

When HUB celebrated its 40-year anniversary in 1999, Harvey Goodwin, Jack Rempel and Glenn Berger were the owners, having taken the reins as equal partners in 1995. All were local to Abbotsford, where HUB was well-known in the community, but none knew anything about the fire service in particular. They all shared a love for equipment — anything shiny and with wheels — said Goodwin, and had no shortage of business acumen. Goodwin looked after the marketing, Rempel focused on the finances, and Berger was the on-site partner full-time at the plant. Berger left several years ago, and today HUB has five partners, with a managing partner in Mike Welte (joined in 2017) and another active partner in Jason Vangarderen (came on in 2015). Goodwin, now 73, has been business partners with Rempel for over 40 years, and they are winding down their active roles, but not retired.

Canada’s oldest fire truck company has never missed a day of production, said Goodwin, and “order board wise we’re stronger than we’ve ever been.” HUB’s focus, from its inception, has always been on the smaller volunteer or composite departments and building personal relationships. It continues to be so today, and Goodwin said they have retained the relationships with these fire departments as their communities have grown and needs have evolved. HUB builds 15 to 20 high-end trucks per year, operating a different model than larger assembly line facilities who offer stock trucks or standard models.

The challenge today lies in the environment that is impacting all fire truck manufacturers, with the their three main issues being the supply chain and resulting surcharges, alongside availability of labour, said Welte, who was born and raised in Abbotsford like many of the other local partners in the business. Welte’s background is in finance, and he entered a new world coming into the fire. It’s one he’s enjoying and Goodwin agrees as he look back at his time in Fire.

“It’s been a great ride and there’s absolutely nothing I would go back and say I wish I wouldn’t have done it that way.”

Related
NFPA Impact: Creating more user-friendly standards
Leadership Forum: Knowing when to stay silent and when to speak
Comment: The case for kindness
Back to Basics: Ladder Dating, Part 3