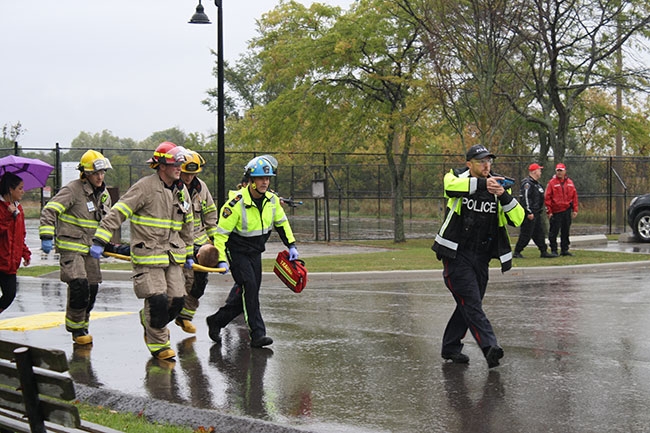 The integrated-rescue ideology stems from school shootings in the United States, after which some viable victims waited hours to be transported from the scene and receive treatment.

“We identified some opportunities that would better incorporate our fire service in triaging and evacuating those people who might be victims,” said Sgt. Douglas Ritchie, a member of the York Regional Police emergency management team.  “Whether that’s an active shooter or another technical disaster.”

“Building from that, we had conversations with East Gwillimbury Fire Chief Phil Dawson, and said hey, how can we consider using our fire resources differently; you may not always be putting fires out so how can we use you?”

To develop best practices, policies and protocols for an integrated-rescue system, senior representatives of the three services participated in an exercise last fall to test unified command and the effectiveness of the proposal.

The mass-casualty scenario involved a person with a weapon on a bus – a former employee of the transportation service. The bus crashed and injured other drivers and passengers.

“Because this person wouldn’t get off the bus, we had to contain the bus, which is what our police officers did,” Ritchie said, “and we later apprehended him. During that time, we used integrated-response team members to go in and extract some of the victims.”

East Gwillimbury Deputy Chief Ryan Jagoe said none of the tri services that participated in the exercise did anything outside the scope of regular duties, rather the response was simply better managed to ensure the best possible patient and first responder outcomes.

“As this team migrates into a scene, the function is to deal with the patient,” Jagoe said. “This isn’t anything outside what the fire service or paramedics do every day, this is bringing it together in a co-ordinated, unified way, so it doesn’t matter how big or how small [the incident] is, this team can operate efficiently and effectively.”

Over time, all police, fire and paramedic personnel in York Region will be trained to respond to mass-casualty incidents using unified command. Although the term integrated-response team has been tossed around, leaders of all three services agree it’s more of an ideology or concept than a team; anyone on shift at any time will be trained to participate in such an incident.

“It’s an across-the-board approach to deliver the service,” said Tate Mitchell, superintendent for York Regional Paramedic Services, “regardless of who’s on duty. We have to be able to consistently deliver the product.”

“Our next steps are to bring all our partners to the table to discuss how this is going to look moving forward,” Mitchell said. “The idea is there, the concept is there, the framework is there – we just need to put ourselves together, align what looks like the best practices, and then roll that out to our respective services.”

Police training in York Region includes mass-casualty response; in 2014, that led to a discussion about how to better prepare for and react to such incidents, Mitchell said.

“So whether that was applied to an incident that occurred at a school or a shopping mall . . . traditionally, we would operate, if there was a major incident – let’s say it was  a police-related scene – police would take control of that scene, and once that scene was determined to be safe and secure, then we would let everyone else in – EMS and fire.

“Prior to that, they stayed on the outside. So what we’re able to do now is create an area within that scene that is relatively safe and secure – then these teams could come in to these scenes and be able to triage these people and bring them back out.

“We can’t really rely on our best assets – our tactical resources, whether that’s police, EMS or fire; we have to utilize what we have available right there, and if we’re able to create a team that’s able to be deployed under the direction of a unified command to go in, then we will be able to save these people instead of leaving them there to bleed out. The holy grail of trauma outcomes is eliminating preventable death; that’s what we’re trying to do.”

The integrated response concept was white-boarded first, then tested. “We tried out the concept in a garage to see if it would work,” Sgt. Ritchie said, “and then we put it into a live exercise.”

“From a fire-management point of view, what I like about it is the elegant simplicity of it; the cops still look after the bad guys, and stabilize the bad guys; fire still does what they always do – just stabilize the scene, whether it’s extrication or fire control. And the paramedics do what they do best, which is stabilization and patient care.”

What’s different? Unified command, and a set of to-be-developed protocols and practices to ensure a seamless flow on scene.

“That’s the beautiful thing,” said Dawson, “we’re just bringing these teams together. I’ll speak for myself – this is a first it’s breaking down those services and operations.”

Critical to the operation, said Mitchell, is communication.

“You don’t want the various emergency service providers to be operating in silos,” he said. “You need to have communication going into these things; we need to have an understanding of each other’s roles; we need to have the established protocols that we’re trained to and tested to, so when you’ve got the front-line officer, paramedic, firefighter on scene, they understand each other’s services and are able to work together to provide the best possible service in the most timely fashion  that is going to save lives. You don’t want to be figuring it out for the first time when you arrive on a critical scene and you don’t know the person standing next to you; you need to know what they’re capable of, and then you rely on your protocol.”

Usually, a threat to responders means fire and paramedic services would stage away from the hot zone, and leave patients waiting for transport and medical care.

“So that sets the scene for this concept to move forward,” Mitchell said. “If we believe that we’ve isolated the threat that exists to responders, and it’s reasonable for responders to quickly grab the victims and treat whatever needs to be treated, then extricate them from the scene – that’s what we’re trying to get at.

“Traditionally, if there’s an event it can take hours and hours to secure a scene and by that time it’s all but over. We’re not going to get there in two minutes but we’re certainly going to get there much sooner than traditionally would have been the case. With this approach, the tri-service are going to come together and those three commanding officers on site, and in the best interests of staff safety and public safety, are going to decide yay or nay, are we going in our are we not; and once the risk has been assessed and it’s determined that the risk is reasonable, we will go in and extricate the people.”

Essentially, there needs to be a change in the way responses to mass-casualty incidents are handled so patients are reached quickly.

“With Columbine, and Sandy Hook, why did it take three, four hours, to get to viable patients? The fire service generally has been stand by and stages a couple of blocks back,” said Chief Dawson. “We’re critical thinkers, so is that really effective in today’s world? Is that ever effective? We’ve got firefighters who are trained but [due to being staged] have no idea what’s going on.

“To me that’s the paradigm shift: we want to stress that everyone is operating in their respective zones – cops stabilize the bad guy,  fire stabilizes the scene, paramedics stabilize the patient. So we’re not putting firefighters or paramedics in the hot zone with the bad guy. It’s elegant simplicity. But it is a paradigm shift . . . that it’s no longer acceptable to stand back. The public expects a level of service,  they expect their emergency services – all three of the partners – to deal with this.”