You’re buying a new truck. What details are important to you? Do the features and creature comforts that concern you matter to the manufacturers? Are the manufacturers listening to their clients?

You be the judge.

In April, at FDIC in Indianapolis, Spartan Chassis unveiled its new, roomier truck body. Why the extra space? So firefighters wearing bunker gear have more room to move and are more comfortable – and safer – when they’re seated and responding to calls.

The specifics were kept secret until the FDIC trade show, when Spartan’s re-engineered chassis with quiet-cab technology – and what it calls next-generation seats – was revealed.

Essentially, without increasing the 251-centimetre (99-inch) width of the Gladiator cab, Spartan’s engineers made more hip room for firefighters wearing their gear.

In addition, the seat cushions are better – the foam is a higher quality – the lumbar support has been improved, the weight distribution is more even, vibration has been reduced by 50 per cent, the shoulder harness is more easily accessible, there’s an E-Z Release SCBA system, the seat fabric reduces blood-born pathogen exposure, and the cab is less noisy (a 45-per-cent reduction in sound at 72 kilometres an hour – 45 miles per hour – with the windows up), which makes communication easier.


Spartan’s dealers in Canada are Dependable, in Brampton, Ont., and Vimar in Alberta.

Like Spartan, Pierce kept its truck news guarded until FDIC, where the Appleton, Wis., manufacturer displayed its new Saber and Enforcer custom chassis.

Pierce, too, has made more room in the cab – the smaller engine tunnel is lower and more contoured, which increases elbow and hip room for drivers and officers and improves visibility in the cab.

A cool new feature: the patent-pending adjustable rear wall allows firefighters in the forward-facing seats to move the seats in three-inch increments.

“As your department’s needs change,” the company says on its website, “now you have the ability to adjust the seating to match.”

Ergonomics are better; there are fewer trip hazards (streamlined, lower steps, for example) and a single, bonded windshield with no centre post for better visibility.

Pierce had originally planned to release only the Saber but at FDIC surprised even those (reporters – included!) who had an early heads up on the Saber and also unveiled the Enforcer – a retired but popular cab and chassis.

Pierce representatives said the Enforcer provides more options than the base Saber.

Pierce has four dealers in Canada: Darch in Ontario; WFR in western Canada and the territories; L’Arsenal in Quebec and MicMac Safety Source in Halifax.

Safetek is approaching its truck-buying customers differently – confident that its GreenPower idle-reduction technology appeals to municipalities with an environmental conscience.

“There was a common thought,” said Safetek vice-president Wayne Stevens, “that there’s nothing you can do on the fire side to support your community’s green initiatives.”

Fire trucks, after all, idle while the pump runs, producing environmentally unfriendly emissions.

That thinking, Stevens said, is dated.

Indeed, Rosenbauer introduced its Green Star idle-reduction technology in 2009 and many other manufacturers, including Spartan, offer auxiliary power units that run the trucks when they’re parked on scene but not pumping water.

“More municipalities are requesting green products and that has some impact on the increase in popularity,” said Scott Oyen, Rosenbauer’s vice-president of sales.

“Green Star has seen a consistent and steady rise in popularity since the introduction. Many departments will wait to incorporate new technology for a few years to allow time for the technology to prove itself and they are now purchasing.”

This year, Rosenbauer incorporated a colour display with its APU so users can monitor battery condition, an Hourmetre for the diesel APU and a timer to let the deriver know when the truck’s main engine will shut down.

The system is similar to that used by airlines and some commercial trucking companies; when an aircraft sits on the runway, the auxiliary power unit – or APU – engages, so there’s no need to run the engines.

“The thought was that in the majority of larger fire departments, where most of the calls are medical, they’re not engaging the fire pump so the main engine doesn’t need to be running.

“So what if there was similar technology so that when the trucks get to the call, the main engine shuts down and the auxiliary engages, and that eliminates the need to run the main chassis engine?”

“So fuel consumption is way down and we’re seeing customers who are seeing significant savings on their fuel bills – up to 20 per cent.”

In addition, there is less wear and tear on the large engine, which means less maintenance and therefore lower operational costs.

“So we’re seeing customers who are saving tens of thousands of dollars a year.”

“Now, the technology is becoming known because we’ve got those early adopters,” Steven said, “and now the departments are calling us.”

The system is all automatic, Stevens said.

“The driver doesn’t even have to shut down the main engine. When the department gets to a call and the driver puts the park brake on, if he does not engage the fire pump, then the system will automatically shut down the main chassis engine and start the auxiliary engines. So the engineer can get out and do what he would normally do.”

But is GreenPower practical given the cost?

“It’s an option,” Stevens said. “In the larger, busier fire departments that’s where you start to see the savings; the busier you are running medial calls the more you will save because the truck is idling more often. If a department already has a generator speced out on a truck, the cost increase from the generator to our APU – which will also act as the generator – is about $15,000 to $20,000.

“So when we look at $15,000 and you’re saving on fuel – the return on investment can be achieved in as few as five or six years – and you add the improved maintenance costs on top of that, and if the department keeps the trucks for 10 to 15 years, they’re realizing significant savings over the life of that apparatus, in addition the green initiative.”

The technology can be used in any truck. Toronto’s GreenPower trucks are aerials; Markham has a pumper, and Safetek has quoted and specified GreenPower for its rescue trucks.

Smeal developed the technology and sold its first trucks to the fire department in Charlotte, N.C., which helped to improve the idle-reduction system.

“Canada,” Stevens said, “is very receptive to this technology – even more so than in the United States.”

For most fire departments, the technology is still new. But Stevens said Safetek believes municipalities will embrace GreenPower once there’s more evidence of the cost savings.

“All firefighters are from Missouri – the show-me state,” Stevens said. “Your nice glossy brochure is great, but they want to talk to someone who’s running this technology. We’ve got the early adopters – Toronto, for example – so if departments don’t believe what we say, they can call our customers and talk to them. That’s the biggest validation of any technology, those early adopters who continue to order the trucks.”

Midwest Fire showed off its multiplexing system at FDIC in Indianapolis. Multiplexing is not new to fire trucks – many manufactures have offered it for a while, some since 2002 – but Midwest now installs the system in all its tankers and pumper-tankers; and, it says, multiplexing adds more options with little expense.

Mutliplexing is basically a durable wiring system that allows the truck driver to controls lights; the system also performs diagnostics.

“Not only will multiplexing add a layer of customization, but it also adds a greater level of serviceability,” the company says.

“The beauty of the multiplexing capabilities on the service side is the ease of computer interface. We can have a customer plug in their apparatus to a computer and we can remotely diagnose any lighting issues and reprogram features that will help customers without the expense or delay of bringing a technician to the apparatus or bringing the apparatus to us.”

Midwest is based in Luverne, Minn.

Florida-based E-One was, you might say, on a bit of a quest. After months of what it calls in-the-field customer research, E-One debuted its redesigned custom cab at FDIC.

Lower and wider cab steps – a change that many manufacturers are implementing – allow for easier, smoother egress.

There’s also more legroom, extra storage under the rear-facing crew seats and space for USB ports and a 12-volt outlet.

In addition, E-One says its red ambient lighting throughout the cab improves visibility for the crew without distracting the driver. 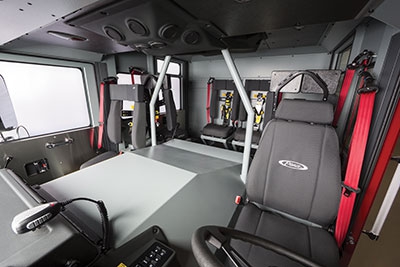 Pierce’s new Sabre and Enforcer chassis and cabs offer more hip room for the driver and officer due to a reduction in the size of the engine tunnel. You’re buying a new truck. What details are important to you? Do the features and creature comforts that concern you matter to the manufacturers? Are the manufacturers listening to their clients?
Print this page