Features
Back to Basics: Ladder dating series — Working on the ladder 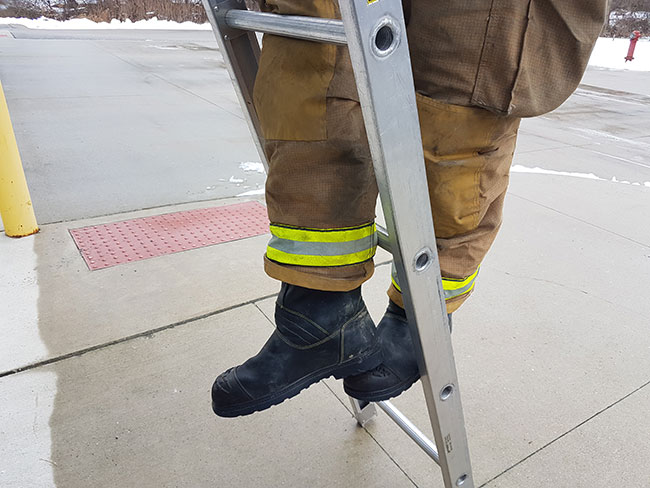 The heel-toe method is a hybrid version of the leg lock where the leg is only going through the rung and resting on the foot. Photos by Mark van der Feyst

When we mention working off or on the ladder, we are including such tasks as breaking windows, venting windows, overhauling around windows, overhauling under the eaves, applying water into the building, bringing up tools, bringing people down the ladder, cutting the wall open for a RIT operation or occupant removal operation, etc. There is no limit to what can be done on a ground ladder for fire ground operations.

The main issue with working off or on a ground ladder is losing one’s balance and falling to the ground. Whenever a fall occurs off a ground ladder, injuries will certainly be sustained. The severity of them will be dictated by the height of the fall and the weight of the firefighter. Some of the reasons why a firefighter may fall from a ground ladder are not preventable, such as an object falling off from the roof like snow (in a good chunk) or a person jumping from above. Other times it is due to overreaching and trying to work too far off the ladder. This can be prevented.

What can be done instead? There are three other options that are available to use. These options are not my creation but rather Lt. Michael Ciampo’s from FDNY. He is regarded as the top ladder expert in the country and has been teaching these options for several years. 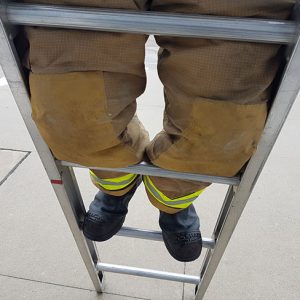 In the knee method, the firefighter is pushing or pressing their knees against the inside of the beam of the ladder. 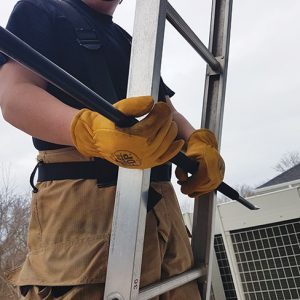 In the tool method, should the firefighter lose their balance, the hand tool will come in contact with the ground ladder and prevent a fall. 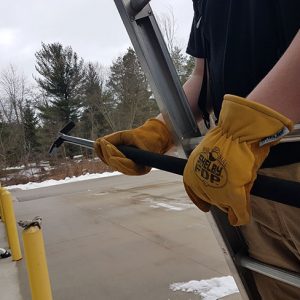 The firefighter has one arm through the rung of the ladder and the other arm is on the outside of the ladder beam, a key aspect of the tool method.

The first option is called the heel-toe method as seen in Photo 1. This is a hybrid version of the leg lock where the leg is only going through the rung and resting on the foot. The heel of the leg through the rung is resting on the toe cap of the other foot. This adaption comes over from the iron worker side of the trade as this is what they use when working on a ladder. This will allow a firefighter to be on a ladder without being locked into it. Should they have to get off the ladder quickly, they can do so much easier than if they were locked in with the leg lock.