Doctors, firefighters and why the power is in prevention

During my training as a physician, which began in 1982 at the Winnipeg Health Sciences Centre, and concluded in 1996 at the Arizona Cancer Center, I must have assessed and treated thousands of patients. Looking back though, I never really paid much attention to the firefighters, or any other special group, for that matter. As a physician, I was never fully aware of the work-related risks of what it meant to be a firefighter.

Why was this? Why do the impending long-range health dangers that face a firefighter escape a doctor’s attention? The answer is simple: just like firefighters working on the fireground, a doctor must frequently operate under the urgent pressure of workload levered against time. The concept of ‘situational awareness’ applies just as much to the work of a doctor as it does to the work of a firefighter.

Firefighters must note that, for doctors, the medical training itself is so mentally and physically demanding, the patients so numerous, the illnesses so serious, the responsibilities so dire, the hours so merciless, and the patient turnover rates so high, that the goal of just surviving the interminable grind of medical education — without messing up too badly, or else going down altogether — is often the haggard medical resident’s prime objective. Under the burden of circumstance, it is difficult for a doctor to maintain focus on the personalized details of any special group of patients.

On the flip side however, a doctor will be delighted to cooperate with a motivated firefighter for better health and wellness outcomes — once that physician is made aware of the risks that confront the fire service. Firefighters should know this, and be empowered to address it by acting as their own best health advocates. Therefore, a firefighter must take personal responsibility over matters they can control directly. This includes maintaining an optimal body weight through eating a healthy diet with a reasonable calorie count, attaining peak fitness through physical activity, eliminating tobacco consumption, curtailing alcohol along with refined sugar, ensuring a regular, good night’s sleep, and drinking plenty of water. Then, there is something extremely important – our mental health – which determines the way we think and is the basis of all motivation and action. A relatively new science called epigenetics has shown that the cells of our bodies take their signals from our beliefs. The mind is therefore a powerful force, and optimal mental health is critically essential for a firefighter’s overall health. This makes down-time, stress reduction, relaxation, strong social connections, and talking – whether that be with a trusted mentor or a mental health counselor – all critical ingredients for healthy and fit firefighters. It goes without saying that workplace safety and health are also an important part of firefighter health, including proper use of clean, personal protective equipment, and careful decontamination after a fire call.

There is one further important point to make: firefighters must also take the responsibility of informing their primary care providers of the long-term, line-of-duty risks they face. This premise gave rise to the “Firefighter’s Cancer Screening and Surveillance Letter”, which was commissioned under the vision of retired Surrey, B.C., fire chief Len Garis. Freely available to all firefighters working in any geographic location, this letter can be found on the Fire Chiefs’ Association of British Columbia website. Firefighters are encouraged to print this letter out, and regard it as a personalized medical document that has clinical currency in any fire jurisdiction worldwide. I wrote the letter expressly for the purpose of informing primary care providers of the long-term health risks that firefighters face, primarily as it concerns cancer.

In summary, for a firefighter, personal accountability in thought and action constitutes an important act of public service, because healthy and fit firefighters are functional firefighters — they are out in the world working in a spirit of generosity. 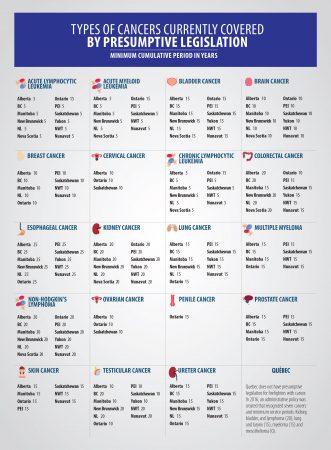 ■ Training and Survival: Doctors and their Firefighters
When I think back on the matter of a doctor’s training, and the innumerable nights spent ‘on call’ in the hospital, I remember some isolated but dreadful clinical vignettes involving sick or injured firefighters. Cases like the stoically resigned but forlorn 44-year-old firefighter with leukemia who, sitting alone in his isolation room, was breathing through a yellow paper face mask while clad only in a blue hospital gown. He was grasping an I.V. chemotherapy pole to support his weight, after having spent many weeks on the bone marrow transplant unit. Shivering uncontrollably with fevers and chills, his very life was in peril from the leukemia as well as the difficult and prolonged treatment.

And then there was that otherwise fit and robust 55-year-old non-smoking firefighter, accompanied by his visibly shaken and apprehensive wife. He rolled around in agony on a hospital gurney in the clinic, having been diagnosed with a sudden-onset and aggressive form of lung cancer. The disease was already metastatic to his ribs and vertebrae, and his illness was so rapid that I never really got the chance to know him. He didn’t suffer long though, but in dying, left another widow to attend yet another solemn bagpipe ceremony.

All of these, and many other heartbreaking firefighter cases to the side, my life and medical training went necessarily onward. In February 2011, I was living in Nelson, B.C., where I was giving a series of public lectures on cancer awareness and prevention. At one of these, a volunteer firefighter by the name of Harry Hadikin, from Beasley Search and Rescue, asked me if I would consider giving a similar talk on how firefighters, specifically, could avoid getting cancer. This simple request triggered a flood of recollections concerning all the firefighters I had seen over my years of practice who had succumbed to cancer. Later, on researching the issue, I was surprized to discover that several large, statistically significant studies had been published in peer-reviewed medical journals confirming that firefighters, when compared to the general public, had higher incidence and mortality rates from cancer. I have since prepared the lecture Hadikin requested, called: “Job-Related Cancers in Firefighters”, and have given it to appreciative audiences at firehalls and hospital conference rooms all across the province. This talk can be found online on the Comox Search and Rescue website.

These speaking engagements have brought me face to face with many in the fire service who have been diagnosed with a cancer they feel resulted from the toxicity of fighting fires. Some of these firefighters have told me they were unsuccessful in obtaining recognition and support from Workers’ Compensation because the type of cancer they were diagnosed with was not on the presumption list. Just as heartbreaking, I have seen cases where firefighters diagnosed with a Workers’ Compensation-recognized cancer were denied benefits because the clinical timeline of their illness did not meet the required minimum cumulative period. To the best of my knowledge, wisdom, and experience as a cancer consultant, I have never known any type of cancer to obey a minimum cumulative period. Similarly, there are over 200 different types of cells in the human body, any one of which can give rise to cancer in response to a carcinogenic mutation, depending on individual genetic vulnerabilities. Therefore, it is possible for a firefighter to be diagnosed with any type of cancer, and this includes rare cancers that are not typically covered by workers’ compensation. Rare cancers may be infrequent; however, they are not infrequent to the person they are affecting, and this includes firefighters.

A quick review of the firefighter cancer presumption laws, along with the minimum employment periods, shows considerable variation in coverage from province to province. This reflects the complex personal, medicolegal, scientific, and economic controversies that surround this type of legislation. Furthermore, the non-uniformity in cancer presumption highlights the point that cancer is a complex, multifactorial, and poorly understood phenomenon that involves many variables including advancing age, personal lifestyle choices, natural cancer causing exposures like sunlight and certain infections, and environmental and job-related carcinogens, all of which are balanced against an individual’s genetic susceptibility.

In light of this knowledge, I hope progress in cancer presumption legislation will continue to move forward with expanding coverage for firefighters, as firefighters themselves continue assuming personal responsibility for their health.

Dr. Kenneth Kunz trained as an oncologist, cancer researcher and a mental health & addictions counsellor and consultant. He is a competitive track and field athlete and father of two residing in British Columbia. Contact him at Kenn@netidea.com