Features Leadership
Cornerstone: The power (and pluses) of networking

The cornerstone of any vibrant and successful organization is its ability to build on the information it obtains through courses, seminars and networking with others. Like you, I enjoy reading and sharing the information found in the vast numbers of firefighting-related books and magazines that I receive and have accumulated along with information obtained from DVDs, videos, seminars and courses that we have all attended over the years.

The cornerstone of any vibrant and successful organization is its ability to build on the information it obtains through courses, seminars and networking with others. Like you, I enjoy reading and sharing the information found in the vast numbers of firefighting-related books and magazines that I receive and have accumulated along with information obtained from DVDs, videos, seminars and courses that we have all attended over the years.

In fact, one of the reasons I became an associate instructor for the Ontario Fire College and two Canadian universities is because it amazed me how much can be learned from the interaction with the students and instructors and from the research that must be done to stay current in the fire industry. Interaction with our counterparts in the fire service forms the foundation for this information gathering. However, we shouldn't forget about the value of partnering with those outside our industry. These two valuable perspectives can give us a different point of view on how to deal with fire-related problems in a non-fire way. 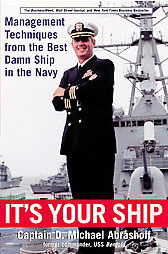 This concept of information sharing and networking is the catalyst for this column. Thankfully, one of the greatest strengths of the fire service is our desire to freely share what we have learned. So, the intent here is to build on this strength and create a vehicle through which we share tips and lessons learned.

For this issue, let's take a look at two remarkable books on leadership, team building and communications and how these lessons can be incorporated into your lives and teachings. The first book is called It's Your Ship by Michael Abrashoff (published by Warner Books, Inc., 2002).

Abrashoff was a captain in the U.S. navy and was transferred to take command of a state-of-the-art guided missile destroyer with a crew of 310 men and women. Unfortunately this crew had earned the dubious honour of being one of the least effective teams in the navy. Abrashoff had two years (his term of command for this assignment) to build the confidence and reputation of the crew to a level that was befitting of them. During his two-year journey he learned that clear and open communication with his staff was paramount. This also meant that as a leader he needed to truly hear and understand what was being said by his people.

In the end, with the support of its captain and the determination of its people, the ship and its crew became one of the top-ranking units in marksmanship and efficiency. Abrashoff had taken an ineffective group and turned it into a team of professionals that had true focus and a reason for doing what they did. They became a crew of confident problem solvers who took responsibility for their actions. Abrashoff gave them the respect, trust and the tools they needed to accomplish their jobs and in return he earned their respect and loyalty. 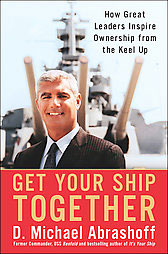 In his second book, Get Your Ship Together (published by Portfolio, 2005), Abrashoff builds on the lessons he learned as he helped to develop and fine tune his crew on the USS Benfold. As noted on the inside cover, "The book proves that whether the setting is a battleship or a bakery, great leaders get everyone to buy in to the cause and accept personal responsibility for the organization." In the book, Abrashoff interviews six people who come from different walks of life and levels within each organization – from a first lieutenant to a CEO to an officer in the RCMP. He demonstrates how each of these people applied the same basic leadership lessons to their situations. Each chapter is filled with "lesson" capsules that summarize how each person not only changed what needed to be changed but embraced and celebrated what worked well for his or her organization.

Some of the concepts promoted in his second book are: Always put the mission and the team ahead of yourself; Success transcends the bottom line; Don't just accept change, create it.

After reading these two books you'll recognize that most organizations deal with the same issues we in the fire service deal with, and it's how we learn from these gems of information that make us who we are. Each book offers the reader some simple yet important lessons that we need to keep close to our hearts as current and future leaders in the fire service. I would recommend both books to anyone who strives to make a difference in his or her organization.

It's Your Ship and Get Your Ship Together can be ordered online from Chapters and Amazon. I hope I have sparked your interest in these two exceptional books. I look forward to hearing from those of you who would like to accept my challenge to share the lessons you have learned from other such books, presentations and/or real-life situations.