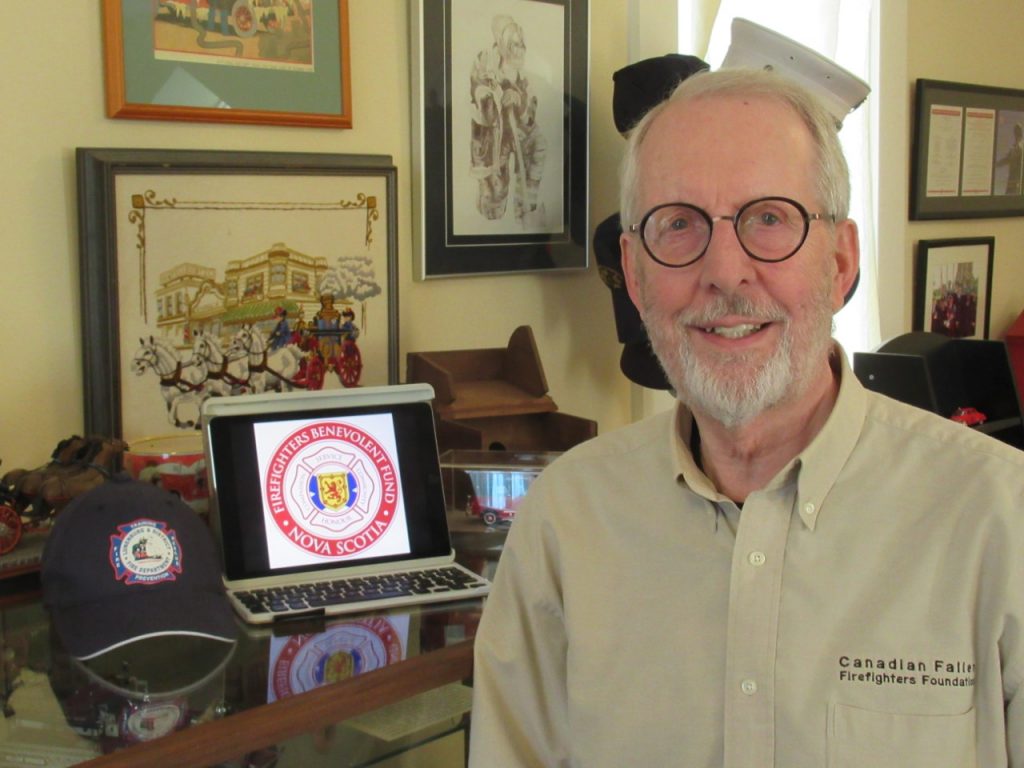 Dr. Will Brooks of Lunenburg has been awarded a Meritorious Service Decoration for his involvement in founding the Canadian Fallen Firefighters Foundation, a charity created to honour and remember firefighters killed in the line of duty. PHOTO CREDIT: Peter Simpson

March 30, 2021, Ottawa — For most of his nearly 79 years, Dr. Will Brooks has been a people person. His innate ability to connect with people, his burning desire to help them achieve their goals, his compassion and support for those who struggle daily with emotional, health and financial burdens, and his love of the fire service recently captured the attention of the Governor General’s office.

Last month, Brooks was awarded a civilian Meritorious Service Decoration for his role in the creation of the Canadian Fallen Firefighters Foundation (CFFF), an Ottawa-based charity created to honour and remember firefighters killed in the line of duty, and to support their families.

According to the Chancellory of Honours, the Meritorious Service Decorations recognize individuals who have performed a deed or activity at a high standard, bringing benefit or honour to Canada. Brooks’ two CFFF co-founders were also honoured – Georges Potvin and Bill Williams.

During an interview at his Lorne Street Fire Company in Lunenburg, where he houses his 1913 Model-T and 1933 American LaFrance fire trucks, and an assortment of vintage firefighting gear, Brooks related what motivated him, Potvin and Williams to establish the foundation.

“First of all, I am deeply humbled to receive this award, but it belongs to the thousands of firefighters and generous donors across Canada. They made the foundation what it is today,” said Brooks.

Brooks said he, Potvin and Williams were members of the Bytown Fire Brigade, a group of people who had a passion for preserving fire-service history. Many of them owned vintage fire apparatus.

“It became clear to us there was no Canadian national recognition of fallen firefighters, like the National Fallen Firefighters Foundation, which the U.S. Congress had set up,” he said.

“Canada’s fallen career firefighters could be remembered through the American organization, but they and our fallen volunteer firefighters didn’t receive national recognition here at home,” he added.

Brooks said 9/11 had a tremendous impact with the general public in Canada and the U.S., so it created a sort of zeitgeist moment when people recognized the need to start a Canadian foundation.

In 2003, with funds raised, legal work completed, and governing board put in place, CFFF was incorporated. A moving memorial to fallen firefighters, designed by Douglas Coupland and Mary Tremain, and located across from the Canadian War Museum, was erected and dedicated in 2012.

“I derive joy from being able to support the families of fallen firefighters, by providing scholarships and grants, and by the programs we set up to ensure families are not left on their own,” said Brooks.

Born and raised in Maine, Brooks earned bachelors and post-graduate degrees in English and philosophy at the University of Maine, then a doctorate in psychology at Northern Illinois University.

Building his academic career, he taught at various institutes of higher learning, including a stint at Northern Illinois University, when he was assistant dean of men and assistant professor of education.

He moved to Nova Scotia in 1969 to accept the position of director of student services and professor of education at the Nova Scotia Teachers College, where he worked for 15 years. He then went into private practice as a psychologist for the next 10 years.

Having been an educator and mental-health practitioner all his working life, Brooks is particularly proud of the critical incident stress management program he and what is now known as the Fire Service Association of Nova Scotia developed in 1989.

“The program had its origins in Halifax, then was expanded to the entire province. It’s still going strong today,” said Brooks, who was a member of fire departments in Maine, Truro and Lunenburg.

Brooks is not one to rest on his laurels. During the past few years, he has immersed himself in two other noble initiatives, both involving the fire service, and the hometown heroes who serve in it.

“It’s the people who give me the greatest pleasure in the fire service. I love being around them, and I’m lucky enough to have contacts with firefighting officials all over the world,” said Brooks.

He is a founding board member of the newly launched Nova Scotia Firefighters Benevolent Fund, a registered charitable society whose mission is to provide financial support to firefighters and their families during times of acute crisis.

Brooks is also spearheading the creation of the Canadian Museum of Firefighting History.

“I’m working with a group of people in Halifax, through Halifax Fire and Emergency. We want to develop a national museum in Halifax, home of Canada’s oldest fire department,” he said.

“In December I was able to incorporate the name, and now we are at the point of developing the board and lining up all the necessary governance documents,” he added.

Brooks said he sees the museum evolving. Initially, there will be apparatus, documents, and artifacts such as vintage helmets, bunker gear and tools – all things related to firefighting over the years.

“I imagine a lot of what will happen will be a virtual connection between the museum and other museums across the country. We see ourselves connecting coast-to-coast-to-coast,” he said.

Brooks said in a perfect world the museum would be housed near or on the Halifax waterfront because when tourists once again begin arriving by ship, they will have another attraction to visit.

“There is a significant population around the world that loves to tour firefighter museums. For example, the Montreal, San Francisco and Helsinki museums are exceptional,” he said.

“We have a wonderful Nova Scotia Firefighters Museum in Yarmouth, but at this point it can’t accommodate any more artifacts. We support and believe in what all regional firefighter museums in Canada are accomplishing, and we want to work with them. Collaboration is key,” he added.

Peter Simpson is a Firefighter and Medical First Responder with the Dayspring and District Fire Department in Upper LaHave, Nova Scotia, and is a founding Board member of the Nova Scotia Firefighters Benevolent Fund.