June 10, 2015, Penticton, B.C. – It’s not often a speaker at a fire chiefs conference can silence a room, bring delegates to tears, generate a standing ovation and create energy around a formerly taboo topic so strong that there is unanimous agreement to act.

Nathalie Michaud did that yesterday.

Nathalie Michaud is a firefighter. On the morning of Jan. 30, 2010, she found Otterburn Park, Que., Fire Chief, Richard Stringer, hanging in the fire hall. Richard Stringer wasn’t just the fire chief; he was Nathalie’s husband.

Fire officers in the packed room fidgeted, stared at the floor, wiped their eyes, and came out of the hour-long presentation emotionally drained but with a clear understanding of the chaos caused by traumatic events, and unanimously determined to finally confront post-traumatic stress disorder head on.

For the first time, in front of an audience of colleagues, Nathalie bared her soul, eloquently revealing details: frantically flitting among five different hospital departments to identify her husband’s body, tellinghis kids, flashbacks, anger, despair, hypervigilance, her own suicidal notions, tequila as a tranquilizer . . .

In July 2013, Nathalie responded to Lac-Megantic. The sounds and smells caused flashbacks to other events in Natalie’s life that pushed her to the brink. Anger. Resentment. Fear.

“I’ve learned that there are two ways PTSD can kill you,” she said, standing on a box behind the lectern, her strong voice and stamina defying her petite frame. “First, you’re still alive, but you’re slowly dying inside. Second, suicide.”

Each traumatic event, Nathalie said, strips the sense of security.

“I’m in a constant state of looking over my shoulder,” she said.

Nathalie’s story is lengthy, complex, overwhelming. She was properly diagnosed, spent time at La Vigile, a centre for first responders – “people like me, who speak the same language,” she said. “And when I came out I had a new normal.”

Nathalie’s message (look for a more detailed story in our magazine in September), is simple: it’s time. Time to talk, time to listen, time to act. It doesn’t take much: ask your colleagues if they’re OK. If you think they’re not, ask again. Keep asking. The firefighter façade will crack.

Nathalie tells her story in Summerside in July at the Maritime Fire Chiefs Association conference and hopes to speak at other conferences. She and Wayne Jasper are committed to helping fire chiefs commit to helping those with PTSD. When you hear Nathalie speak, you will be too.

Ed Brouwer has written extensively about PTSD in his Trainer’s Corner column in Fire Fighting in Canada. As a fire-services chaplain he counsels colleagues. He has dealt with his own stresses and challenges. And, as I learned on Sunday, his Eagles Next Ranch is the perfect elixir, an antidote to emails, deadlines, technology, a haven of spectacular sights, sounds and smells.

We lost track of time touring Brouwer’s 160-acre paradise, under a sapphire blue sky after a rancher’s skillet breakfast (I was right, no yogurt!) – hanging out with rescued horses, marveling at the wonders of nature that dot the terrain. We took a wrong turn, circled back, sweated under the blistering sun, and did business not on the phone or by email, but face to face. Until I realized it was 11:30 a.m. and I was a 90-minute drive from my 1 p.m. meeting . . .

It’s difficult to move quickly over the switchbacks on Anarchist Mountain overlooking Oyosoos in a boxy Ford Flex. I made the meeting, but with no time to change and smelling of woods and horse farm, sneakers coated in dust, windblown hair and sunburned. Nobody noticed, everyone firmly focused on BlackBerries and PowerPoints.
June 10, 2015 By Laura King 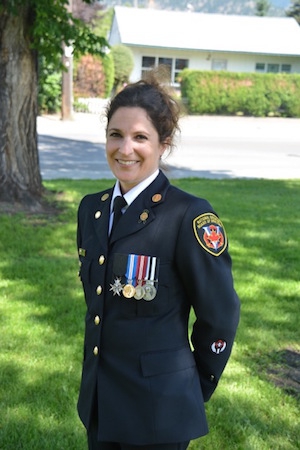