Feb. 9, 2016, Mississauga – The best line I heard yesterday during Road to Mental Readiness (R2MR) training came from the table behind me: "The only way to change things in the fire service," a classmate said, "is through peer pressure."

There were nods all around.

Twenty-one students are in the R2MR program this week, offered through the Ontario Association of Fire Chiefs and run by the Mental Health Commission of Canada.

Blogger Jennifer Grigg, a volunteer firefighter who has experienced some of what we're learning about, took the course last week; my perspective is different.

I have no experiences to share about calls involving children or gruesome extrications, fire fatalities or the cumulative stress from a 20-plus-year career as a first responder.

But as I mentioned to the group during Monday morning's introductions, people tell me things; I'm trained to listen and observe, to get interview subjects to open up, to ask probing questions so I can write detailed stories.

Problem is, I have no idea what to say to people who tell me they are living with – not suffering from – mental illness (see, we're learning already).

Another interesting takeaway from Monday's session was the absence of the phrase occupational stress injury; the mental-health commission dropped the term from its parlance because, according to master trainer Sergio Falzi (a retired cop in a room full of firefighters, which makes for some entertaining moments), it's impossible to separate work stress from home stress.

Remember the onion analogy from the movie Shrek? "Ogres are like onions," Shrek tells Donkey (a sentence I never thought I'd type!). "Onions have layers; ogres have layers."

Well, turns out stress is more like onion soup, French onion soup, to be precise; onion-filled broth with a slice of burnt toast and a mess of gooey cheese, and it's impossible to separate one ingredient from the other.

We talked a lot about stigma – think about the words prejudice and discrimination and whether the former can exist without the latter – and statistics: by 2030 depression will the leading cause of disability claims worldwide.

We watched compelling video of an OPP officer who ignored his symptoms for years then crashed and and burned (figuratively); he had been afraid of what his peers would think. Familiar, eh?

"Through my fear I neglected to address that trauma the same way I would [have addressed] getting a knife to the kidney," he said, in other words, as an injury.

We also learned that despite what many in fire think, it's not up to human-resources departments to deal with employees' mental illness – everyone in the hall or department has a role to play.

Then we got into the nitty gritty – resilience, goal setting, visualization, tactical breathing, and the ad-hoc incident review that's a critical part of R2MR.

Even after eight full hours, though, I was still thinking about the first few minutes of the day – the obligatory ice-breaker exercise during which we were asked to stand in groups according to our vacation-destination choices, then our food favourites (sweet chocolate or salty chips!), and, lastly, our pet preferences.

In the end, half the group ended up on either side the room – as logic dictates would be the case.

Finally, we were asked to place ourselves at one end of the room if we knew someone living with mental illness, the other end if we didn't.

One half of the room filled up; the other half emptied. And, thus, we all had something in common.

Hook, line and sinker, the instructors had made their point, and we sat down for the next 7.5 hours to learn – in Falzi's words – to sell cars to people who want to buy pick-up trucks, to change a culture, shift a paradigm.

The mental health commission is teaching R2MR to more than 250,000 emergency-services workers in the next 12 to 18 months. Those trainers will, in turn, teach their departments and others.

As Falzi explained (the man has a gift for analogies), R2MR creators knew flood gates would open once police and fire started to understand that mental illness is a injury that can be treated, managed and, in so many cases, healed.

A tsunami of peer pressure for which your department better be ready. 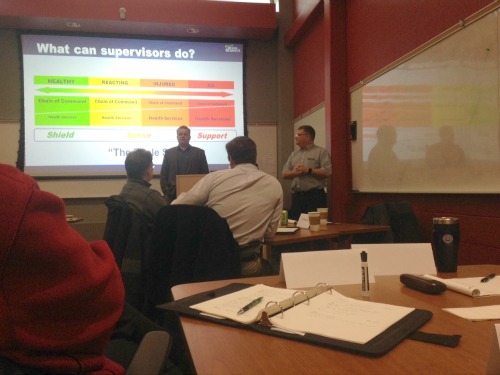