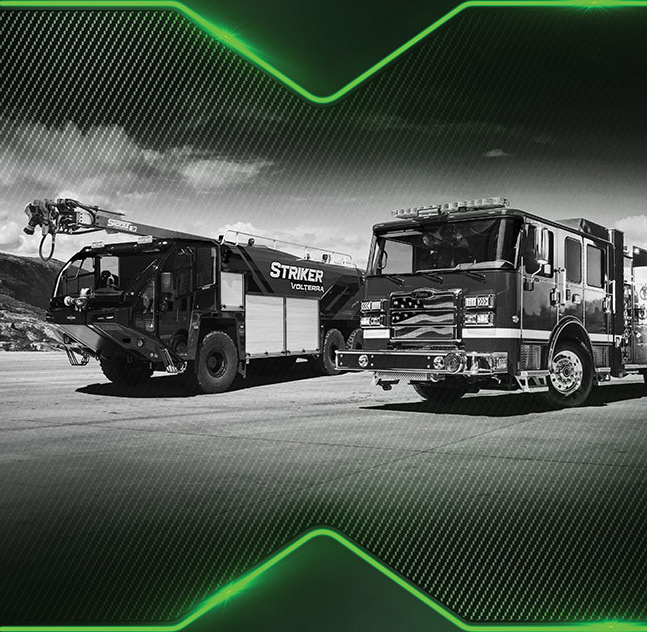 The time has come. The age of electric fire trucks is now in our backyards. There is excitement, curiosity, doubt, as well as the naysayers. Whether we like it or not, we all know it’s the way of the future.

Let’s define all electric and hybrid, as both are available in the Class 7 and 8 heavy truck market, as well as in custom built fire trucks. An electric car or battery electric car is a vehicle that is propelled by one or more electric motors using energy stored in rechargeable batteries. To compare it to an internal combustion engine vehicle, electric cars are quieter, have no exhaust emissions, and lower emissions overall. The all-electrical vehicle has a battery life and run time as well. This means the batteries must be recharged to allow this type of vehicle to sustain a driving distance or have a means of regenerating power to charge batteries while driving. This can be done stationary at charging stations. Some manufactures are able to recharge batteries with every brake pedal application. Amazing!

The hybrid electric vehicle is a type of vehicle that combines a conventional internal combustion engine with an electric propulsion system. The electric powertrain is intended to achieve better fuel economy than a conventional vehicle as well as better performance and greenhouse gas reductions. The electric side of the vehicles are being recharged by the internal combustion fuel-fed engine while driving as well as when braking.

For electric fire trucks, we are living through the greatest leaps in battery technology. However, an electric fire truck design was first patented in 1885 by Schuyler Wheeler. He removed the steam powered driven unit to the fire pump and created an electric one, though horses where still used to for transportation. The first modern-day fully electric fire truck in the world was introduced by Emergency-One on a Volvo chassis. It was called E1 EVO and is located in the UK.

To an observer such as myself, the fire truck builders have been treating this all-electric version of a fire truck like the space race. European and North American fire truck builders all want their trucks to be the first and be effective. The key question for fire departments are asking is, will it work? In June we learned the City of Brampton purchased the province’s first electric fire truck, a Rosenbauer RT zero emission pumper that will replace a fuel powered fire truck. The truck is expected to be in service in early 2023. The Rosenbauer RT (pictured above, with RT standing for Revolutionary Technology) was showcased in in Vancouver back in January 2020.

The Rosenbauer RT’s innovation has an eye for detail and ergonomics, carrying a price tag not that far off from a diesel pumper in the same class. The appearance is space age and European in style.  Rosenbauer is reporting eight hours of electric operational time on a full charge. The apparatus carries an on-board diesel generator called a back up range extender to recharge the batteries while in service to enable it to run much longer. The plug-in feature at the fire station can take the place of the exhaust capture system and ventilation system needed to remove exhaust gases. Since the range extender engine is only needed to recharge batteries, it shuts down and then only electric’s in play.

REV Fire Group (E-One, Spartan, Smeal, ER, KME and Ferrara) recently issued information on their all electric fire truck. With the E1 EVO technology, I am sure this North American designed electric fire truck will be another great contender in the market. The batteries are laid down between the frame rails moving a heavy component to the lowest centre point of the truck. It is available in pumper form as well. The look is one that we traditional folks in the fire service can recognize. The battery technology packs 316 KW of automotive power to move this beast. A Cummins range extender diesel generator is designed to help to recharge batteries on the move as well. Locally, used parts are reporting that REV’s truck will make for easy repairs after sales as well, as it’s not completely proprietary. REV Group says the EFT will meet NFPA and ULC standards while pumping in fully electric mode. The range extender engine in this truck would be needed when flowing at full KPA for long periods of time to replenish batteries.

Pierce also introduced the Pierce Enforcer Volterra pumper. This is the first in service electric fire truck in America. Madison County took delivery of this truck and have reported great success so far. Its internal combustion engine coupled with the electric motor provides the electrical power this hybrid style truck requires for continuous pumping.

Sit back, or be the first like Madison in the U.S. or Brampton in Ontario, but either way look hard at what is coming.

Vaughan Fire and Rescue Service, where I work, has always been a proactive leader in new technology. We, like many other municipalities, want to do what’s best for the environment. The electric fire truck is here to stay and I predict it will only be a matter of time before the electric truck will be all you can get. 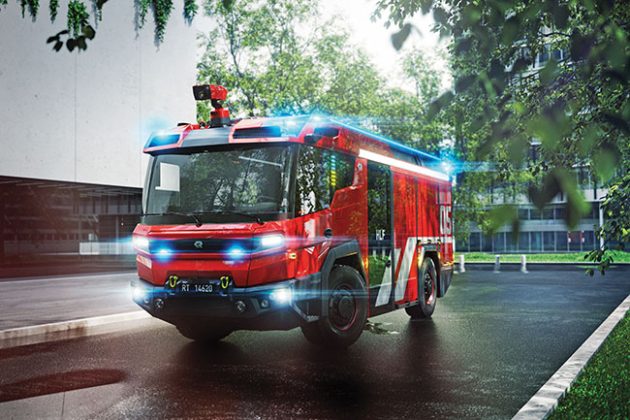 I would like to share some data that is only based on the passenger car side of the business since the large truck, especially fire department apparatus, are only now creating all electric vehicles and data is limited and mostly European at this time. This information was gathered from a post I read on Facebook from a municipality in Canada.

A Tesla household requires 75 amp service to correctly and effectively recharge a Tesla. The average household is 100 amp service. On a street of about 25 homes, the electrical infrastructure would be unable to carry more than three houses with electric vehicles. This would overload the system. If your car was charging and you wanted to cook dinner with the oven and stove and do a load of laundry in the dryer all at the same time, the odds are you would have to wait until the car was charged or you would not be able to go back out to get more sheets for the dryer. If even half the homes have electric vehicles, the system would be greatly over loaded. So while the electrical officials are promoting this electrical propulsion idea and installing more windmills and solar cells, the problem for the subdivision electrical grid will not be revealed until we are so far down the dead end road that we will have no choice but to pay more money to have the electrical grid updated to be able to charge these vehicles. An average cost per kilowatt pending on season is $1.63 per kwh and 16 kwh x 1.63 per kwh equals $26.08 to charge the battery. The $26.08 per charge divided by  40 km equals 1.99 per km to operate. Compare that to a gasoline vehicle of about the same size (not a diesel)  getting about 13.5 litres per kilometer. At $1.32 per litre divided by 40 km that would equal about .33 cents per km. These are some numbers to consider and additional food for thought.

My two cents? Electric vehicles are a great thing. But consider that the emergency vehicle technician will require a whole new level of training. With this future of electric fire trucks comes a future of EVTs that are specialized in one more area of expertise. Better start thinking now about how that is going to look in your own fire department. It’s already hard to get technicians in this trade. Make it attractive with purpose and they will come. There is no life like it, no job like it, no better form of work satisfaction than knowing that what you have fixed or designed or built is helping keep your city or township safe when all the chips are down and first responders are needed. Without the technicians, these trucks don’t roll.

Be safe my friends, and remember, “rubber side down.”

Chris Dennis is the chief mechanical officer for Vaughan Fire & Rescue Service in Ontario. He can be reached at Chris.Dennis@vaughan.ca.