May 4, 2016, Fort McMurray, Alta. - Alberta Premier Rachel Notley says a wildfire has already torched 1,600 structures in the evacuated oil hub of Fort McMurray and is poised to renew its attack in another day of scorching heat and capricious winds.

''There's been fairly significant destruction of residences,'' Notley said at a morning briefing in Edmonton.

There have been no reports of injuries or deaths, but the wildfire is still out of control as it rages around the city, 435 kilometres northeast of Edmonton.

Notley and her officials say the outlook remains grim.

Chad Morrison, manager of wildfire prevention, says the 75-square- kilometre fire, which chewed up sections of the city's south and southwest Tuesday, is expected to shift north to hit new neighbourhoods as winds pick up in hot, dry conditions.

Scott Long with Alberta Emergency Management says crews are doing their best but admits: ''It is a possibility that we may lose a large portion of the town.''

Fort McMurray fire Chief Darby Allen said early Wednesday there were no buildings on fire, but he expected that to change.

''This is a nasty, dirty fire. There are certainly areas of the city that have not been burned, but this fire will look for them and it will find them and it will want to take them,'' he told another briefing in Fort McMurray.

Allen said a cold front was expected to move in later in the day, but that could bring with it a new enemy – lightning.

Notley was planning to head to Fort McMurray by mid-day to meet with officials, survey the scene and thank first responders.

She said the downtown remained ''mostly unaffected'' and all 105 patients and clients in the hospital were safely airlifted to other care centres.

Mayor Melissa Blake said her city is strong and remembers Slave Lake, a community devastated by wildfires in 2011.

''We will hope to follow in the shadow of Slave Lake in our perseverance and resolve,'' said Blake.

''And as we look to the future, this is still a place of incredible strength, resiliency and vibrancy.''

The wildfire roared into the southwest corner of the city Tuesday afternoon. It engulfed homes in three subdivisions and destroyed vehicles, gas stations and a motel. The Beacon Hill suburb in the south end had the worst damage with about 80 per cent of homes destroyed.

The blaze cut the city in two, which forced residents to flee north or south, depending on where they found themselves.

Robin Smith with the Regional Municipality of Wood Buffalo, which includes the city, said it was believed everyone was out.

''We don't have anyone who's decided to hang around and stay in town. We have RCMP patrols that are regularly looping the neighbourhoods to make sure there's no one straggling,'' said Smith.

There was a bumper-to-bumper gridlock exodus on Highway 63 late Tuesday, the main artery south, with many vehicles on the side of the road or stuck on the median after breaking down or running out of gas.

Notley said the situation was improving.

''The congestion is thinning out and people are safely making their way to receiving centres.''

The premier said about 10,000 evacuees fled north to stay at oilsands industrial camps, although Smith put that number at 20,000.

Another 35,000 were streaming south to the communities of Anzac, Lac La Biche and Edmonton. Some were going as far as Calgary.

Shawn Brett said by the time he got out on his motorcycle, smoke and flames were all around the neighbourhood.

''I didn't have time for nothing. I literally drove through the flames. I had ashes hitting my face and the heat from the fire was that bad,'' he said.

''Everything was jammed. It was nothing but the biggest chaos I'd ever seen.''

The province said 100 firefighters were on the scene, backed up by 10 helicopters and 17 air tankers. The military has provided rescue helicopters, and Long said 15 residents who had been cut off by fire had been airlifted to safety. 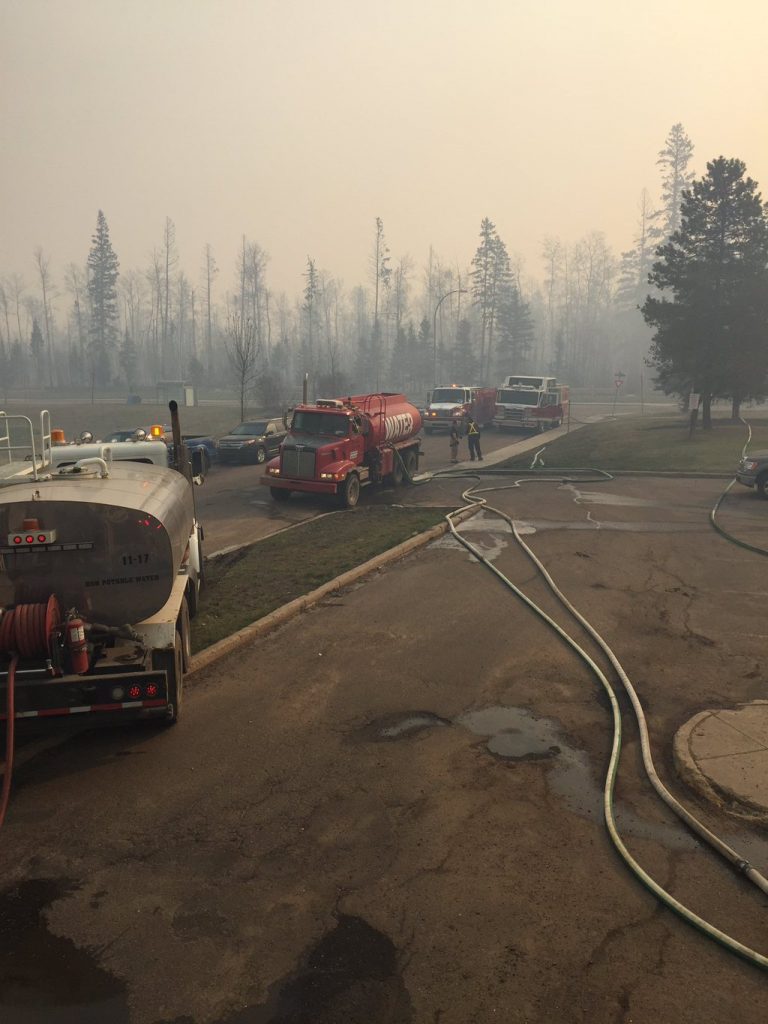 Crews from St. Albert Fire and Rescue Services have deployed to Fort McMurray.
Print this page