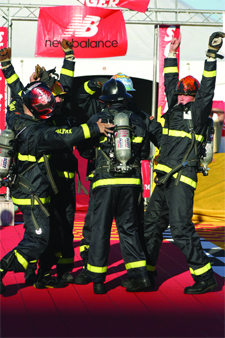 You won't find Joe Triff's name on the trophy that most Canadians consider the most prized in sport, but fresh off his team’s hometown victory in the Scott FireFit Championships, the volunteer firefighter and his teammates got a taste of what it’s like to be champions on a national stage.

“The team time is like winning the Stanley Cup in our profession,” Triff says. “It’s the coveted trophy.”

No one had expected the bluenosers to win. Other teams had better showings in regional competitions and even the organizers figured the Halifax 1 team, tired from hosting the event and several evenings in a row of social obligations, might not be able to put in a best effort in the national finals.

But in front of a supportive crowd on the picturesque Halifax waterfront, Triff, Andrew Foote, Rob Hebb, Adam MacNeil and Mike Sears, with Bruce Mosher from the Halifax 2 team pitching in for the relay, ran clean, fast races in the team event and the relay and came out on top.

“It was totally an upset,” says FireFit’s Hilary McRoberts, still amazed at the Halifax team’s first-place time of 4:15:05 in the team event. The time was more than 24 seconds faster than the Halifax team’s 2006 showing. “Team-wise we were looking at Edmonton – they were definitely a team to watch. Halifax, we thought, could be competitive but we didn’t know, with some of the times that were being run, if they could pull it together. It was just non-stop for these guys so for them to actually pull of the time that they pulled off …  It was an absolute shocker.”

“Edmonton was the team to beat,” said McRoberts. “They just didn’t perform. Bob Murray was four seconds off his best time. Brian Forseille was definitely off and had two penalties, so that was an additional four seconds added to his time. Those were their top scorers who needed to place well. Halifax beat them by three seconds, so if either of those guys had run well then it would have been a different story.”

The grueling races, run Aug. 30 through Sept. 2, with competitors wearing full turnout gear, took a toll. Windsor’s Kotsis, a FireFit veteran and one of the competition’s top runners, was expected to challenge for first place in the individual category but fell at the finish line.

Joe Triff knows the feeling, having come third at the regional competition in July due to penalties. Triff, who turned 25 in September, spent the rest of the summer training to run a penalty-free race.

The Halifax Regional Fire and Emergency Services bought a new training tower, which arrived a month before the team’s first regional competition. Triff said the team’s weakness had been the tower challenge but having a structure similar to the one used in the competition to train on made all the difference.

For Triff, the extra work and the new equipment paid off with a victory in the individual competition at the national championships in addition to the team title.

At 1:20:05, Triff finished more than 10 seconds faster than the 1:30:68 he clocked at the 2006 nationals in Niagara Falls. With his time (including penalties) of 1:28:38 in the Halifax regionals, and some big guns who recorded better times over the summer, Triff wasn’t a favourite to win the individual category.

Veteran FireFit competitor Dwayne Drover, from Windsor, along with teammate Kotsis, Murray from Edmonton, Mike Gilbert, from St. Catharines, Ont., and Steve MacCulloch, from Guelph, Ont., were the top finishers in the individual category after the 14 regional competitions. Organizers said any one of them could have won the day and the national title.

Indeed, Triff’s individual race time at the nationals was more than two seconds slower than Gilbert’s remarkable 1:18:45 finish but Gilbert received a two-second penalty for tossing his hammer beyond the boundaries of the hammer-landing area, resulting in a final time of 1:20:45. Gilbert had run the fastest time in Canada earlier in the summer, finishing in just over 1:17 in a wildcard race at the nationals.

“It all comes down to mind over matter on event day,” says McRoberts. “You can say that you practise at home and you’re in your comfort zone when you’re at home but then you get into event situations and you start to psych yourself out or you get a bit too over confident. Mike Gilbert, who on wildcard day ran just over 1:17:98 , was the guy to beat. He had a good run but it wasn’t good enough to beat Joe [Triff]. Mike had a penalty, and I’ve never seen him have a hammer penalty before. It was an error in judgment. He just overzealously tossed the hammer and he’s a seasoned veteran.”

Triff is modest about victory but thrilled to be in such esteemed company.

“I was just fortunate to have my best time and keep it clean on a day when others were having trouble keeping it clean,” said Triff. “I was competitor 191 and there were 202 competitors, so there were five races after me. It was very unexpected. I was in the top 15 going into the finals and my goal was to try to break into the top 10. I had zero expectations of winning.”

McRoberts has a different perspective. “He had to have the race of his life and did it in his home town in front of all of his friends and family. It’s thrilling to see people who put in that much effort and he has worked really hard this year, the whole Halifax team has, both of their teams had.”

The Halifax 2 team of Joe Barbati, Richard Hynes, Bruce Mosher, Cyril Fraser and Jeff Clarke, finished 15th at 4:50:88, just off the 4:50 time the team had hoped to achieve.

“To run a 4:50 time as a team time is pretty amazing,” McRoberts said. “To have two teams in the top 15 is awesome.”
Indeed, the Halifax 1 team bettered its 2006 fourth-place finish by 24 seconds this year. The team had finished first in the Gaspé regionals and third in the Halifax regionals. Triff finished second to Dwayne Drover in the individual category at regionals in Longueil, Que.

In women’s action, volunteer firefighter Kathy Babcooke from Wolfville, N.S., finished first among the 14 individual competitors in 2:20:25 while Danielle Comolli from Toronto came second at 2:23:16, followed by Tanya Philips from Mississauga Fire at 2:25:41. New Zealand’s Angela Munro, who was in Canada on vacation, had the fastest time for an international competitor, at 2:15:36, making her the fastest female over all.

Teams can participate in as many regional competitions as time, money and energy allow in order to qualify for nationals. Teams comprise three to five members, many of whom also compete in the relay category. Individual competitors who are not part of a team must run a sub-two minute time through the demanding obstacle course to qualify for nationals while teams must come in under nine minutes. Teams and individuals that finish first in their region and category earn a bye to the final day of the nationals. Others can qualify for the final day of competition on so-called wildcard days during nationals. The top 14 teams and, generally, the top 20 open individuals, plus five to 10 participants from other categories, qualify to move on to the final day at the national competition. Team results are determined by the accumulation of the top three individual times.

“The relay and the team times were the two categories that we were doing well at all year and we were looking at trying to win those two divisions going into the finals,” said Triff. “Nobody expected anybody from our team to finish first individually.”

For the Halifax 1 team, the national victory was a stepping stone to the international competition in November in Las Vegas. The team came 11th last year at the Vegas competition and is aiming for a top-three finish this year.
Triff figures the team has a shot at a good finish in Vegas but knows the competition will be tougher than it was in Halifax – the team from the Travis Air Force Base in Fairfield, Calif., is considered the top relay team – and some differences in the U.S. course might present challenges for the Canadian competitors. Still, Triff is confident in his teammates.

“Our team is probably has the most depth of any team in the country,” says Triff. “All five guys going into the finals were within two seconds of each other.”