Features Health and wellness Hot topics
FireFit title up for grabs: Rookie squads stand a chance with five time champs out of the running 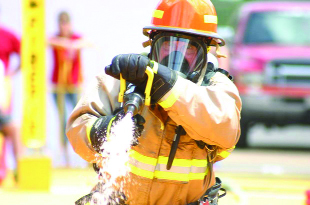 Competitions to determine the most fit group of firefighters in the country began in May in Kamloops, B.C., with some new and hot teams ready to challenge the big guns from previous years.

With the five time Canadian championship team from Windsor, Ont., – Jack Bailey, Darren Hillman, Greg Kotsis and Jorin Welsh – having retired from the competition, we’re told that a new group of Windsorites has stepped up to try to live up to the success of their predecessors. We’re anxious to get to know them and see them in action.

Challenging the Windsor team is the Westshore Terminals squad from Delta, B.C. With four rookies last year, this team is now a group of seasoned competitors and is ready for some big results, as is the crew from St. John’s Regional Fire Service. This team from Newfoundland and Labrador had a fantastic first year in 2006, finishing second behind Windsor at the FireFit finals in Niagara Falls, and is looking to better its performance in 2007.

There was some mystery surrounding the Edmonton team, the Canadian champion in 2005 but a no show in 2006. We now know that returning to the course this year is Bob Murray, the overall individual winner in 2005 and part of the championship Edmonton team the same year. Murray spent a year in Australia on a job exchange and is chomping at the bit to get back on the course with his new team.

Our spies tell us that Whitehorse will be back in full force for 2007 and our scouting reports indicate that our host city for this year’s finals, Halifax, N.S., has the talent to challenge for top honours. In addition, the Waterloo, Ont., team, led by Dwayne Drover, a top competitor in 2006, is one to watch.

We’re anxious to learn whether the North Bay team, which finished fifth in team competition and fourth in the relay last year, is back to try to better its results. We expect Mississauga to repeat its strong showing after Chris Ogg’s course time of 1:28 last year.

A new team out of Brantford, Ont., could also be a threat, with Randy Kalan joining veterans Steve Kostuk and Paul Mitton.

And, it looks like the Sinnett brothers, Dwight and Ryan, from Gaspé, Que., will  again join Jerome GrandMaison, who won the overall individual title in 2006.

Lambton College, which fielded a super team both in the relay and team categories in 2006, has lost some of its key runners to full-time careers but we expect there are others waiting in the wings to fill their boots.

In the women’s arena, Vaughan may once again have a full relay team ready for competition and we hope this will spur the ladies from Mississauga, Gaspé, Wolfville and Toronto to field teams.

Please check out our schedule and all event details on our website, www.firefit.com .