Nov. 13, 2015, Simcoe, Ont. – To Bruce Power from our magazine's main office in Simcoe is a good three and a half-hour drive northwest. Yesterday, in storming conditions, editor Laura King and I made the trip up to tour the much-touted fire training centre and preview cutting-edge sensor technology from Globe.

And, like any good participatory journalists, we brought gear in case we had a chance to play!

Privately owned Bruce Power nuclear generating station is the largest in the world. And as is befitting for such a massive, city-like facility, it has an awe-inspiring fire department and training centre.

For years, he said, the department shipped its members out to regional training centres across the province. Now, the department wants other fire services to come train with them.

The centre is massive. The storage room alone is spacious, leading to a fitness area, classrooms and, most impressive of all, indoor fire props in multiple rooms. (The indoor aspect was well appreciated on a day with pouring rain and bitter wind!)

The props, built by Pro-Safe Fire Training Systems, include replications of a turbine generator and primary-heat transport pump/motor, both one-third the size of those operating on site.

To further the safety of its some 120 full-time firefighters, Bruce Power is testing Globe's WASP (wearable advanced sensor platform) technology, the first department in Canada to do so.

Globe's Canadian sales rep Don King and WASP project manager Kathy McNutt were on hand to run a test of the tech. Firefighters wearing the WASP T-shirts ran a simulation with the turbine prop and we watched from the control room as their breathing rate and heart rates increased from the activity. (Look for more details about WASP in an upcoming cover story about new technology.)

As a final highlight to the day, Laura and I geared up and took part in an exercise in the vertical motor room – Laura on the foam and me with the water stream. We were swimming in foam by the end.

As a writer for, but not member of the fire service, it's always good to experience and appreciate the difficulty of the job.

Decidedly well worth the drive.

Check out more photos of the tour in our Facebook gallery. 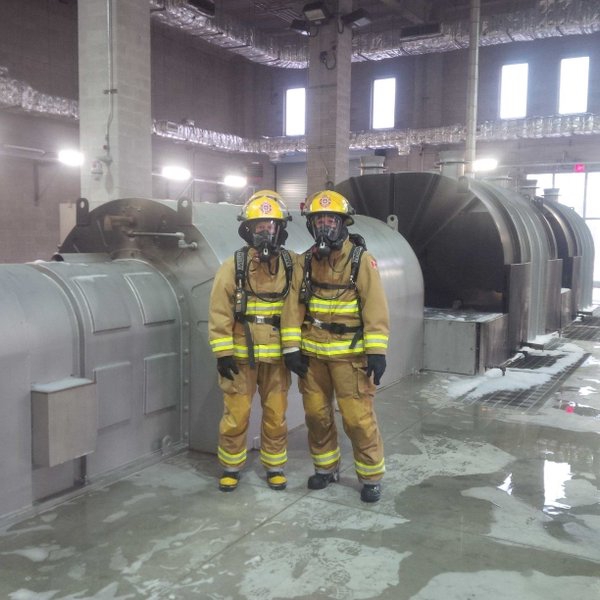