Newfoundland community on edge as town crumbles away 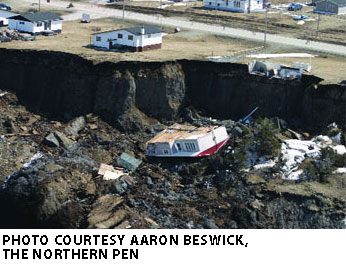 Bruce Biggin stood helpless and distraught on the afternoon of April 18 and watched his home of more than 30 years careen over the edge of a cliff and split into pieces as it crash landed below.

So far, the Biggin home is the only one in the community of Daniel’s Harbour to have plummeted into the Gulf of St. Lawrence because of a massive landslide but others are poised perilously on the brink.

The community of about 300 people has been reeling in the weeks since the landslide chewed away the cliffs that line much of the picturesque town, which boasts a view of the majestic Long Range Mountains. An earlier landslide, in October 2006, put everyone on alert and first responders began to fear another slide in April as the soil in the cliffs became saturated due to rain and melting snow.

Seven homes and one business around the landslide site were evacuated April 15 and a strict security cordon is being maintained around the area. Daniel’s Harbour Mayor Stephen Carey said there has been some criticism about the stringent no trespassing laws but there had been reports of people trying to loot the structures that had gone over the cliff. One backyard shed fell victim to the landslide along with the Biggin home.

Derrick Biggin – there are several Biggin families in Daniel’s Harbour – who left his home on Sunday, April 15, said he salvaged most of his material possessions but is losing much more than that. “When those houses do end up in the drink it’s going to be very dramatic to everyone involved . . . It’s part of you,” Biggin said. “It’s been part of you for 30-plus years and it’s hard to get over those things.”

Landslides are widespread in the province. In Daniel’s Harbour, the cliff stabilized over the winter after the October slide but thawing soil has been cited as contributing to the April slides. The cliff – based not in the bedrock commonly seen across Newfoundland but in clay – was heavy at the top and eroded at the bottom. Excess water in the slope, either from rainfall or snow melt, often triggers such events. Too much water, more than the slope is used to, causes the area to become saturated. Once the soil passes it saturation point it can start to move. If that isn’t enough to cause the problem, the water in the soil also acts as a lubricant and makes it easier for the soil material to shift.

Daniel’s Harbour town manager Melda Hann said on June 5 that those forced to evacuate their homes have taken refuge in summer cottages or are staying with friends or in hotels.

Abe Payne described the decision to leave his home as gut-wrenching. “Everything’s up in the air right now. But, you know, everybody’s taking it in perspective and I guess when you sit back and look at it, it could have been worse. It’s difficult. This has been home for us for over 32 years.” Payne was frantically packing his belongings when he looked out the window and saw his shed slide away.

“When that sank, I sank as well because it was a terrible, terrible feeling. I felt for my own safety and I just couldn’t continue taking things out. It was too, too eerie just to even think about.”

Daniel’s Harbour residents have been told to expect more significant damage. The series of landslides since April 15 has taken away thousands of tonnes of clay-based soil and the land is too unstable to allow any of the evacuated residents back into their homes.

“This is an active slide,” said Fred Hollett, director of Newfoundland and Labrador’s Emergency Measures Organization, describing the dramatic erosion of the cliff that claimed Bruce Biggin’s bungalow.

“We expect to see some houses go, some sheds to go . . . We have yet to move to what we call the recovery phase.”

Volunteer firefighters from the towns of Parsons Pond, River of Ponds and Daniel’s Harbour were called in on April 15 for traffic control, security and to help families whose home were in danger retrieve their possessions.

“I was impressed with the performance and the professionalism shown by the volunteer fire departments,” said Mayor Carey. “When our council asked for their assistance their response was an immediate ‘We’re on our way.’ The co-operation of both government agencies and volunteer has made the landslide situation much easier for the town council to deal with.”

Every rock fall raises blood pressure levels in Daniel’s Harbour these days as the shoreline continues to crumble. Carey said the town is still waiting for the other shoe to drop as provincial engineers have predicted more homes will be lost.

“It was only 25 or 30 tonnes that fell off this weekend,” Carey told the Western Star newspaper in April before the Biggin house toppled over. “Nothing to get excited about. When it gets up to the three- and four-thousand tonne chunks, then we’ll get excited again. A month ago we would have been very concerned by a couple of dump trucks of soil going but we’re getting used to it. The only thing that concerns us is that it was vertical facing dropping off and not natural tapering.”

The Northern Peninsula highway was cut off as the landslide started to impinge upon it. Bulldozer crews knocked out a rudimentary bypass on April 18 to accommodate a backlog of vehicles. By April 19, a temporary highway was constructed through residents’ front yards. Engineers eventually made a diversion to the Northern Peninsula Highway and were planning another temporary route to keep traffic on the regional highway.

Hydro crews have been rerouting power lines for fear that a subsequent landslide will pull utility poles into the Gulf of St. Lawrence.

Dennis Shea, manager, plans and operations for Newfoundland and Labrador Fire and Emergency Services Agency, said the province takes the landslide situation in Daniel’s Harbour very seriously and, with constant input from the municipal council, is providing the necessary resources along with the departments of municipal affairs, transportation and works, human resources, natural resources and labor and employment.

Municipal Affairs is providing engineering expertise with the assistance of a private geo-technical firm, Shea said. He said the Department of Transportation has constructed an alternate highway route around the affected area. This road is the major transportation link for the Northern Peninsula. Work continues on planning a permanent roadway. Human Resources and Labour and Employment are addressing the housing needs of the affected property owners and accommodations have been found for all families. The Department of Natural Resources is providing geological expertise. Fire and Emergency Services has contracted a local appraisal firm to determine the value of the affected properties and will be developing a compensation package.

“It is the province’s intention to take heed to the advice of the geo-technical experts and not permit anyone to live in the identified hazard area,” Shea said.

He said all departments are working to address the needs of the town and the individuals from a public safety and compensation perspective.

“We realize that this event has caused a significant disruption to both the town and the individuals impacted and are working in getting those affected back to some sense of normalcy.”

Hann, the town manager, said an independent appraiser from Corner Brook has presented a review to the provincial government and there have been meetings with the displaced families. Compensation for homeowners will be based on replacement value of the homes at today’s figures.

The two lane roadway accessing the Great Northern Peninsula has now been moved behind the houses it was previously in front of. As of press time, there had not been any major slides since April but almost daily for weeks since then there was some movement of soil and that was expected to continue.