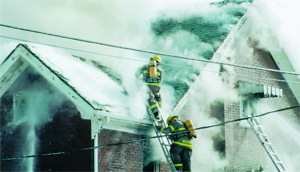 Volunteer firefighters, operating from the Elmira Station in Woolwich Township, Ont., were paged out for a reported house fire at 90 Arthur St. South on Feb. 16, around 13:00 hrs. They would fight a stubborn fire for 3-1/2 hours and remain on scene overnight, mopping up after a tough one, hampered by pre-code building construction. The incident involved a 2-1/2-storey, century-old brick home had been converted into four apartment units and over the years the house had numerous modifications.

PHOTO BY WILLIAM McINTYRE
A ventilation team in full PPE and SCBA advances up a ground ladder amid light smoke conditions.

Later investigation found that the owner of the home left a pot on the stove in the kitchen and had fallen asleep on a couch in the living room. Fortunately, his brother-in-law stopped by to bring him a bowl of hot soup and discovered the fire. He immediately ran to the house next door and had the neighbour call 9-1-1. He returned to the smoking house and his yelling woke his brother-in-law who was able to escape through a window.

Mutual aid called at once
Elmira’s Pump 1 was the first unit on scene and reported heavy smoke blanketing the street and heavy fire showing from the first floor. Mutual aid was requested immediately by District Chief Kieran Kelly who took command of suppression operations. Kitchener Fire Dispatch paged nearby Floradale Fire Department for the second alarm.

Floradale responded with a pumper, a tanker and its rescue unit.  Elmira Pump 1 caught a hydrant on Arthur St S. at Memorial Ave. and pulled two 1-1/2'' attack lines. Firefighters in full protective gear and SCBA worked their lines on the first floor in hope of a quick knockdown. Primary and secondary searches of all three floors were completed. As additional Elmira firefighters arrived on scene with Aerial 3, Rescue 4 and Pump 2'', additional 1-1/2'' and 2-1/2'' lines were stretched to the rear of the house. Aerial crew members, all wearing SCBA, ventilated the roof.

Rapid firespread
Fire spread quickly through the walls of the old building, which had been built using balloon construction. The fire travelled up open voids in the walls from the kitchen to the second floor. It was not long until heavy fire was showing from the second-storey windows. All firefighters were withdrawn from the main floor and suppression operations became defensive.

Elmira’s aerial picked up a second hydrant on Arthur St. S. on the other side of the blaze and set up for master stream operations in front of the building.

Crews had been on scene more than an hour working to extinguish the fire, with only limited success. The balloon-style construction limited the firefighters’ ability to get water onto the seat of the fire. Fire travelled up the open space in the walls from the second floor to the knee wall on the third floor. From there, the fire was able to move up through the open roof joists unabated. Heavy fire eventually broke through the roof.

Third alarm struck
Command requested a third alarm, bringing a pumper, a tanker and a rescue from St. Jacobs to the scene. St. Jacobs firefighters were instructed to lay in from a third hydrant in front of the Elmira and District High School on University Ave. and to deploy two additional lines to quench the fire. The additional lines and master stream from the aerial were successful in preventing the fire from spreading to houses on either side of the involved structure.
The fire was declared under control by 17:00 hrs. Once the exterior lines knocked down the bulk of the fire, crews entered the remains of the structure and extinguished the hot spots. Loss stopped was not declared until 18:30 hrs. Firefighters remained on watch all night dousing any flare-ups.

Damage was estimated at $300,000 and four families were left homeless.

The house has been since razed and    construction has begun on a new apartment building on the lot.

Department profile
Fire Chief Earl Wideman is responsible for overall operations of the five stations and 115 volunteer firefighters of the Woolwich Township Fire Department that serve the residents of Woolwich Township in southwestern Ontario, north of the Kitchener-Waterloo region. Under the command of District Chief Kieran Kelly and Deputy Chief Dale Martin, Elmira’s equipment consists of a 2002 heavy rescue, a 1987 840-Igpm (600-gal., 30-gal. foam) pumper, a 1973 625-Igpm (600-gal.) pumper and a 1968 840-Igpm (200-gal.) 100' quint.