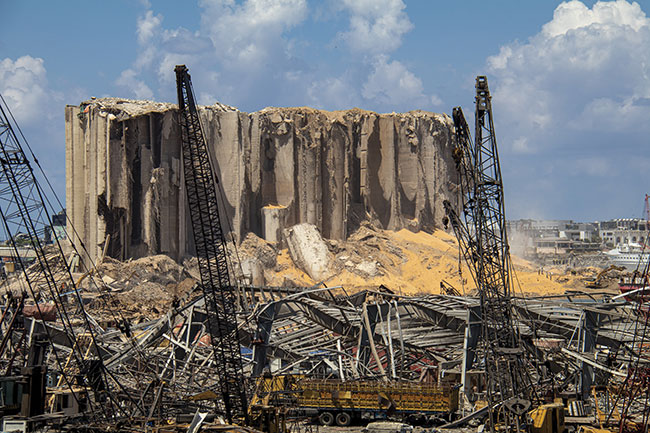 Editor’s Note: This feature has been edited and condensed from the summer newsletter and its updates published by the Explosives Management Group.

The information in the article was compiled from various sources and is not designed or intended to be the official version or the sole guide and source of information. The focus of this article is safety in storage and handling of ammonium nitrate (AN) in Canada. It is not meant to cover in transit and even storage in transit of AN.

It’s been just over a hundred years since the Halifax explosion and now there has been another catastrophe in Beirut. The former involving explosives and the latter ammonium nitrate (AN). That is not meant to imply that there weren’t serious incidents between those two.

I know there is a lot that we don’t know but here are some of the fundamentals of AN.

First, AN is not an explosive. It is an oxidizer used legally as fertilizer and a precursor used by those with malice in mind as an ingredient to make an explosive for an improvised explosive device (IED).

One would hope that the security on the AN in Beirut was very high but all indications are that it was deficient.

Apparently the AN had been in storage in a ‘warehouse’ for six years. It came off a ship. Was it contaminated in any way? Was it in bulk or perhaps bags (25 kg bags or 500 kg/1000 kg FIBC – flexible intermediate bulk container)? From pictures it looks like it was in totes. Was there spillage? Was it all in one heap or broken into smaller quantity piles? Were bags on wooden pallets (wood can be a problem). Was it in the form of flakes or prills? The AN was being shipped to an explosives manufacturer so it could have been either flakes or prills (from pictures it looked like prills).

AN is made into prills (small beads) in a prill tower. The fertilizer grade is solid to allow for slower dissolving in farmers’ fields (it is called FGAN — fertilizer grade ammonium nitrate). Ammonium nitrate in prill form is of a whitish or off-white colour. It gives off a light ammonia smell. Its density varies between 0.72 and 1.0 g/cc. AN readily absorbs water and is very soluble. AN tends to absorb water from the atmosphere. The prills are usually surrounded by anti-caking material to help prevent clumping together, but in spite of this, when in contact with sufficient moisture over a sufficiently long period of time it will cake-up and form larger solid masses. AN melts at 170°C and decomposes above 210°C, producing large clouds of toxic fumes — mainly oxides of nitrogen. Don’t walk into one of these clouds because the NOx will combine with the water in your lungs to form nitric acid.

Due to its hygroscopic nature bulk AN should be stored in such a way that it is kept dry. It is generally stored in a dry silo or warehouse. It should be a secure storage structure (e.g., being locked and protected by CCTV coverage, or other security measures).

AN is an oxidizing agent so it contains oxygen and does not need oxygen from the air for a fire. Fires involving AN cannot be extinguished by oxygen deprivation. Water is the most effective means of fire fighting (it acts like a heat sink). Attempts to smother fires with dry chemical, carbon dioxide or foam extinguishers will not succeed as they work on the principle of depriving a fire of oxygen.

AN is stable in normal conditions. However, when involved in a fire, it will give off toxic compounds of nitrogen oxides and may emit ammonia vapours into the air. When confined or exposed at high temperatures, it can explode. It becomes more sensitive to explosion when contaminated by organic matters or other combustible materials.

AN has three main hazards: Fire due to its oxidizing nature, decomposition with formation of toxic gases and explosion.

Fire: AN itself if not combustible and does not burn but it can facilitate the initiation of fire if contaminated with oil or combustible materials. AN can thermally decompose which can accelerate to an explosion.

Decomposition: When decomposing, AN will give off toxic gases; in an open and unconfined situation it will decompose completely to give gaseous products of ammonia (NH3) and nitric acid (HNO3). These are typically white fumes and vapours.

Explosion: If heated sufficiently (such as a brake/tire fire on a truck) combined with contamination and/or confinement (such as in the bin on a truck) other gases including brown or orange vapours of oxides of nitrogen (NOx) are given off. Through self-accelerating reactions the temperature will keep rising and a detonation could occur.

Fires are avoided by rigorously eliminating the amount of potential fuel, combustible materials and dangerous contaminants in and around AN storage, and ensuring that there are no potential sources of heat nearby.

Hot work is a leading cause of fires and this has since emerged as the most likely reason for the Beirut explosion. In Canada, on the regulatory side welding is generally covered by provincial OHS regulations. In Nova Scotia it is Part 10 Welding, Cutting, Burning and Soldering. Those regulations refer to National Standard of Canada CSA W117.2:19 Safety in Welding, Cutting and Allied processes. On the corporate policy side FN Global Data Sheet 10-3 Hot Work Management is a good place to start for more information. I don’t want to stray too far from safe handling and storage of ammonium nitrate but hot work is a leading cause of fires around the world.

■ Safe storage
The storage of AN in Canada is safer than Beirut – and probably one of the safest in the world. However, in making that argument the facts presented should be accurate.

The Cargo Fumigation and Tackle Regulations under the Canada Shipping Act limits (un)loading to 10 000 t. On Sept. 23, 2019 the Marine Safety and Security Management System Tier I policy Loading or Unloading Ammonium Nitrate Based Fertilizer in a Canadian Port became effective. It describes the process for getting permission for (un)loading in excess of the 10 000 t of bulk AN. Then, there is the follow-up question: Is there a limit on the quantity on a ship if there is no (un)loading? Thus far, I have been unable to confirm the scientific basis and rationale of 10 000 t as a particular limit.

AN storage facilities regulations fall under the Railway Safety Act. Those regulations apply only to storage on a railway right-of-way – a small fraction of the Canadian land mass. Storage must be at least 45 m from a single-storey family home. If you do the conversion from quantity of AN to explosive quantity does anyone consider 45 m to be safe? Perhaps the distances in the regulation need review.

Few other details on the actual cause of the explosion have emerged other than warehouse 12 may have been used for storing other hazardous flammables such as paint thinner and maybe some kind(s) of fuel.

I did a gap analysis of Canadian legislation/regulations and standards related to safety of storing and handling AN. My judgement is that instead of a gap in Canada there is a big hole. There are some requirements in the National Building and Fire Codes, as well as provincial Fire Codes. But more information needs to be readily available.

What are safe distances? For explosives and AN there are consequence and risk based approaches.

“The term “TNT equivalence” is a normalization technique for equating properties of an explosive [including AN when it explodes], to TNT, the standard.” (from IME). There are several techniques for calculating TNT equivalence of AN. One such is to use the IME TNT Equivalence Calculator on their website. Estimates range from 0.25 to 0.75 of the mass of AN. The most common these days appears to be 0.32. However, it should be kept in mind that AN in an explosion does not quite behave like TNT and there is risk assessment software that takes this into account.

Once you have the TNT equivalence one then refers to Quantity-Distance Tables (in Canada the tables are published by BNQ and are free; the five-year review of the tables was scheduled for 2020) to determine minimum distances. When I became an explosives inspector in 1985 I learned that the QD table in use allowed 50 kg of explosives in a steel box 23 m from a house. I wrote a staff paper and then I developed what became the 1995 Quantity-Distance (QD) table.

Consider that risk equals Likelihood x Consequences. If you consider probability together with consequences you get risk.

■ The Emergency Response Guidebook
The Emergency Response Guidebook (I refer to the 2016 version but the 2020 edition has just been released, please contact me for more details) is intended for use by first responders during the initial phase of a transportation incident involving dangerous goods/hazardous materials. Guide 140 applies. If a tank, rail car or tank car is involved in a fire an initial evacuation of 800 m is to be ‘considered’.

First responders rush to the scene of fires – it is their job. But if an AN storage facility explodes (an explosion is either a deflagration or detonation) they are the first to feel the effects. It is vital that departments know where AN is stored in their areas of responsibility. But what about mobile AN such as on a truck? Firefighters should not be fooled by the yellow 5.1 oxidizer placard. A brake/tire fire can lead to AN detonation in a short period of time (23 minutes in Camden, Arkansas). The time from a fire starting to an explosion occurring it typically in the order of 20 to 40 minutes and very roughly speaking about one in 10 ammonium nitrate fires lead to an explosion.

Juri Kasemets, P.Eng. (ret’d), is president of the Explosives Management Group (www.explosivesmanagement.com). He can be reached at emgroup@ns.sympatico.ca.