Paul Voegtle – Location Analytics Specialist, Esri Canada
Several years ago Fire Chief John Kobarda of the London Fire Department in Ontario reasoned that a fire department is really no different than a private company. After all, fire departments offer a service (public safety) to customers (the public), and regularly engage in marketing (fire-safety communications). Could firefighters, then, borrow strategies and tools from private-sector marketers? 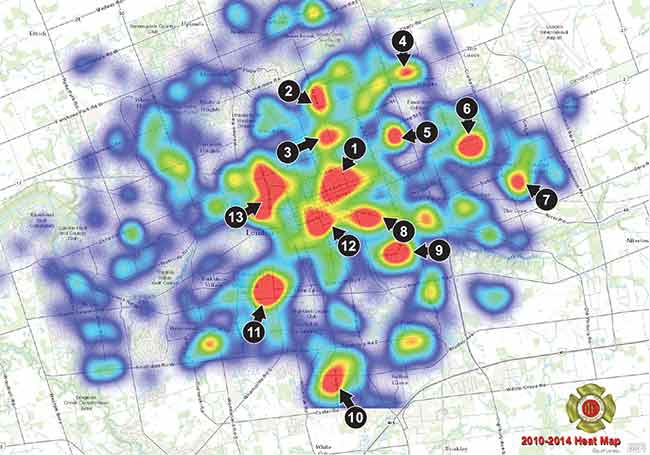 Marketers in the private sector have been tapping into the value of demographic data and location-based analysis for years. By gathering information such as what people buy, what they like to do, where they live and how much they earn, marketers can deliver deep insights to companies eager to better understand their markets. This marketing strategy – known as demographic profiling – helps companies anticipate the needs, wants and desires of existing and potential customers.

By combining this demographic data with maps and applications, companies visualize information in a geographic context for even richer insights. Key decision makers can analyze the information and decide how to market and sell products and services that are more likely to connect with specific segments of the population in certain areas.

So what if the focus changed from how to market mobile phones to millennials, or where to open a new retail pet store, to trying to connect with 20-somethings whose focus on Snapchat, and not what’s on the stove, is causing an alarming trend in cooking fires? Could firefighters use these same marketing tools and strategies to target subgroups of the general population?

If you consider that fire departments have access to a wealth of information related to the people, structures and neighbourhoods within a community – all of which is tied to a location – then it’s clear that the short answer to the question of whether or not fire departments can use these marketing tools is yes.

A heat map depicts risk of residential fires in London

John Kobarda – Fire Chief, London Fire Department
The concept of fire prevention has been around for well over half a century. Despite knowing the best fire is the one that is never fought, fire departments remain heavily focused on extinguishing fires. Even in London, 87 per cent of the fire department’s staff is in the fire suppression division, with just one per cent dedicated to public education. We have a responsibility to protect the safety of our citizens, but the challenge is to find new ways to put fire-safety education into action.

We started from the concept that buildings do not start fires – people do. Viewing the fire challenge from this perspective is what led us to explore how we could use marketing to change people’s fire-safety behaviours. In 2007, we launched our initial fire-safety marketing campaign aimed at educating Londoners about working smoke alarms, as well as cooking, candle and electrical safety. Our early campaigns took a citywide overarching approach that cost approximately $30,000. The campaigns evolved over the next five years, resulting in a reduction of C-occupancy fires (fires in residences, apartments, boarding houses, dorms, hotels) from more than 250 annually to approximately 180. Our early campaigns reinforced the potential and power of marketing fire safety.

In 2011, our approach evolved when we incorporated the knowledge from one of London’s new deputy fire chiefs, Dave Lazenby, who served in the British fire service. For more than a decade, the British fire service has placed a great deal of effort on risk reduction. Using Lazenby’s knowledge, we encouraged our team to develop a new approach – something we call purpose-driven marketing – that is focused on reaching out to Londoners differently. The idea was to stop looking at Londoners as a homogenous group, and instead recognize that every city is made up of a diverse collection of subgroups, living in different neighbourhoods, with unique backgrounds, habits and preferences.

Executing our new strategy in combination with market-segmentation software acquired by the city, we gained a better understanding of and insight into the demographics throughout London. The tool helped us understand exactly who the people in our city are – how old they are, how they spend their money, what they do in their leisure time, how they consume information, how they think and their attitudes – information that would help us know how and where to communicate to them more effectively. By doing this research, we followed one of the first rules of marketing: know your audience.

Next, we needed to make a connection between these demographic profiles and fires in the city. This is where geographic information system (GIS) technology came into play. One of our firefighters, Scott Walsh, expressed a keen interest in learning GIS software. Within six months, he successfully used the software to identify two specific kinds of fires in the city – careless cooking and careless smoking – that we felt could be reduced with the right messaging and targeting. We also learned that while cooking was the primary cause across the city, it was not the highest frequency in all of the areas identified. In fact, in many areas careless smoking was 10 to 20 per cent greater than cooking-related fires.

This information was integrated into a heat map that showed that 55 per cent of the fires that occurred from 2010 to 2014 took place in 13 areas, which represented roughly 20 per cent of London’s land area, and 38 per cent of London’s population. Once we combined this information with demographic data, we discovered exactly where and how more than half the fires in the city had occurred, as well as the personality types of the people responsible for them.

In addition to these actions, we also engaged a market-segmentation software company to conduct an analysis of our data. Segmentation is a process that divides a large homogenous group (Canadian population) into clearly recognizable segments or subgroups. Individuals falling into a segment have similar needs, wants, social values, activities and demand characteristics. We learned that of the 68 segmented groups in Canada, 10 have a higher prevalence of causing fires and eight of these groups resided within the areas of concern. The company then looked at the population density of these groups throughout the city and confirmed the correlation. To see a sample of segmentation, enter your postal code into the following website and see how closely the descriptors identify you and your neighbours: www.environicsanalytics.ca/prizm5

Like any big brand about to embark on a campaign, London Fire was now armed with marketing intelligence to determine how to engage our audience. We developed a focused media strategy aimed at three target groups. As one example, we designed careless smoking ads targeting 20- to 30-year-olds and displayed them in places where we knew this age group frequented such as bars and nightclubs.

In 2013, London became one of Canada’s first fire departments to harness predictive analytics and GIS to develop and roll out a fire-education program. That year, we reduced C-occupancy fires by 22 per cent to 131. Whereas London experienced 6.44 fires per 10,000 residents in 2008, this ratio dropped to 3.52 per 10,000 by 2013. Our efforts and results caught the attention of the Canadian Marketing Association, honoring London Fire Department and Environics with a bronze award in the public service category.

We know that our team can still do better, but we need to do more work to better understand the public’s thoughts and attitudes in order to make greater inroads. We have begun applying the demographic data, maps and GIS-based analysis to the area of fire-prevention inspections. For example, one of the segmented groups we identified, classified as single city renters, are the sole residents in two of the 13 areas. Jack Burt, a fire inspector for London Fire, is applying the data and technology to his day-to-day work.

“By using up-to-date maps, data and GIS-based analysis, I’m better prepared to focus on my assigned area of the city,” Burt said. “Data-driven studies identify areas that are more prone to fires, allowing me to focus my fire prevention efforts in these areas.”

The analytics also drives our annual smoke-alarm campaign. Based on Walsh’ GIS analysis, he assigns crews to canvas residential areas with a higher frequency of residential fires. The heat maps allow us to visualize gaps, revealing areas that need more attention. Targeting segments of the population in specific areas that have historically started a greater proportion of residential fires allows us to maximize limited resources.

Jason Poole, a fire-prevention officer and public fire and life safety educator with the department, says our new approach is making a positive impact.

“Analyzing the plotted heat maps to identify areas with higher prevalence of fires provides educators with an exceptional tool. We display a large version of the map at community fire-safety lectures and seminars. This visual has been a great draw at our events and has brought up many questions from Londoners, especially those living within the hot zones,” Poole said.

In 2015, London Fire spent $120,000 on our fire-safety marketing campaign, an investment that provides 75 million possible impressions. The cost of this campaign – which is roughly the same as the salary of one educator – delivers a greater return-on-investment than previous campaigns, which cost approximately $75,000, plus four educators.

Next on the horizon is a purpose-driven marketing approach to fire station relocation and resource allocation. Our analyses will now also consider the location of greatest fire risks to ensure the resources are in the right place instead of relying on theoretical response areas.

London Fire’s efforts have enabled us to maximize the services offered to residents without increasing operating costs. Our results demonstrate that fire departments across Canada and beyond can leverage the very same marketing data, tools and strategies employed by the private sector to keep their communities safe.

John Kobarda is the fire chief of the City of London’s Fire Department. He joined the department in 1991 and became fire chief in 2004. Prior to joining London, John worked in the private sector as a plant manager, production manager and mechanical engineering technologist.