Two patients had to be extricated from two separate vehicles 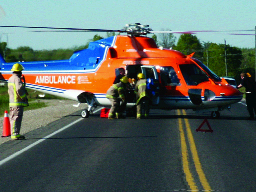 The Township of Centre Wellington (Ont.) Fire Department was dispatched to a multiple motor vehicle collision on June 4, 2004 at Hwy # 6, located south of Fergus & Wellington Cty. Rd. # 22 at 07:36 hours.

PHOTO BY TOM MULVEY
Fire Fighter Dan Stokes and Fire Fighter Dave Rutherford assist the air ambulance crew with patient #1, after he was extricated from a vehicle and stabilized.

Upon arrival it was determined that two patients had to be extricated from two separate vehicles. The Incident Commander, Deputy Chief Wayne Beirnes, was advised that at 07:47 the highway was closed in both directions. At 07:55 the IC was notified that ground ambulance crews had dispatched an air ambulance and that it would be attempting to land at the scene. A landing area was to be prepared.

The air ambulance arrived at 08:12. The driver from vehicle #1 was extricated by Centre Wellington FD at 08:15 and was transported via air ambulance at 08:34.

The driver of Vehicle #2 was extricated by the firefighters at 08:17 and transported via ground ambulance at 08:34.
The drivers from the other two vehicles did not require medical attention.

Department profile
The Township of Centre Wellington Fire Department under the direction of Fire Chief Brad Patton consists of two fire stations located in the former municipalities of Fergus and Elora, Ont. It protects an area of 415 square kilometres with a population of 25,500. In 2004, the CWFD responded to a total of 450 alarms. The fire department employs 52 volunteer personnel along with three full-time employees which include the fire chief, a public safety officer and an administrative assistant. Apparatus in service includes two aerial trucks, two pumpers, two heavy rescue vehicles, two 2,500-gal. tankers, one support vehicle, two Zodiac boats and one Argo all-terrain vehicle.