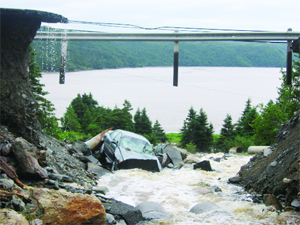 PHOTO COURTESY PLACENTIA FIRE DEPARTMENT
An unsuspecting driver and his car plummeted six metres when the road gave way under his vehicle. The road washout disconnected parts of the community of Placentia for several days.

When tropical storm Chantal dumped more than 200 millimetres of rain on Newfoundland’s Avalon Peninsula in early August, the result was the worst destruction in that area in four decades. Managing the response to such an event would have challenged the largest and best trained full-time fire services in Canada. For the 30-plus members of the Placentia Volunteer Fire Department, the aftermath of Chantal may prove to be career defining, a blend of an in-your-face crisis experience and community service.

Firefighters in Placentia were dispatched as early as 3:30 a.m. on Aug. 1 and many departments spent the day helping homeowners and families get to safe ground and salvage belongings. Some departments were still on duty the next day and in Placentia, the hardest-hit community in the province, volunteer firefighters were on the job well into Aug. 3.

Members of Placentia’s volunteer department received back-to-back calls overnight from residents with water in their basements. As crews responded to the first incidents, the calls for help kept coming. As morning broke, the community of 4,000 awoke to unprecedented destruction.
Placentia comprises the amalgamated communities of Jerseyside, Townside, Freshwater, Dunville and Argentia. It is perhaps best known as the location of the U.S. military base at Argentia and the Marine Atlantic ferry terminal. It received more than 200 millimetres of rain over just six hours on Aug. 1, more than in a typical month. Chantal’s power destroyed main roadways, damaged homes and resulted in the declaration of a state of emergency by Mayor William Hogan. 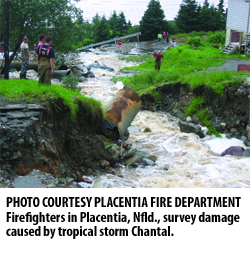 The storm was the worst in at least 40 years, Hogan said, describing one home in which water was flowing in one door and out another. “I’ve never seen anything like it, and I’ve seen it pretty bad here, I’ll tell you that. It’s just havoc.”

At least half a dozen roads in Placentia were wiped out and will have to be rebuilt at a cost of between $1 million and $2 million, Hogan said.

Placentia Fire Chief Wayne Power said that in the worst-hit areas of town, firefighters evacuated homes and investigated the damage for officials at the area’s new Emergency Operations Centre.

Among the most dramatic scenes was that of a car plummeting six metres into a hole in a road created by a washout. The driver drove over a section of road in Dunville where the pavement was intact but the culvert beneath it had washed away. The road collapsed under the weight of the vehicle and the car plunged into a gap caused by the raging brown water.

Capt. Raymond Roche, who was also working as a paramedic with Power’s Ambulance Service, treated the driver, who was transported in the fire department rescue vehicle to a safe area but needed further medical care and had to be taken to the Placentia Health Centre. The washout had disconnected the community of Dunville from the remainder of the town of Placentia and facilities such as the health centre. The fire department reached a local boat owner and arranged for the patient and paramedic to be taken via boat to the Harbour Authority
of Placentia Area wharf, where an ambulance was waiting. Spare medical equipment was brought back in the boat to Dunville and the fire rescue vehicle became a temporary ambulance.

Chief Power said firefighters quickly came up with a plan to get around the washed-out road and ensure that the necessary people and equipment were available and accessible if needed. Fire and ambulance vehicles travelled over alternate, long and nearly impassable routes to be positioned in the parts of the town that were intersected by road washouts.

A Boston Whaler was borrowed from the Argentia Port Authority and piloted by the fire department to create an efficient connection between the cut-off communities. This helped transport, fire, police, medical and other emergency personnel and supplies between the communities. 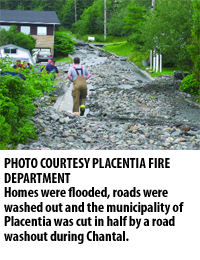 Capt. David Power, the incident commander in Dunville, said the weather beast presented a day of obstacles for fire crews.

“Every rain drop resulted in greater damage to property and infrastructure. This brought challenge after challenge for those of us that were in the danger zone. It definitely created a grueling day.”

In the afternoon, Larkin’s Pond, which serves as the water supply for part of the municipality, reached its limit and began to overflow its banks, driving water toward nearby homes and threatening more road destruction. Firefighters began to build a sand-bag wall, which helped to re-route the water before it could cause more damage.

While assisting townspeople, firefighters also had to worry about their own home, as Fire Station 2, centrally located in Freshwater, flooded with water and sewage, damaging equipment and making the station inoperable. The crews removed all necessary supplies and operated a mobile station for the rest of the day.

“The members committed themselves throughout the day and into the night to deliver relief to the victims and ensure the safety of our citizens,” said Chief Power. “At times of emergency, emotions are high and people are not always conscious of the dangers and activity which surround them. Our main goal was to ensure safety and prevent injury.”

Environment Canada said on Aug. 1 that Chantal was the third named storm of 2007, a number not usually reached until mid-August. Over a 12-hour period, automated weather stations recorded that 200.4 millimetres of rain fell near the CN terminal at Argentia, 189.3 millimetres fell at Whitbourne – near the intersection with the Argentia access to the Trans Canada Highway –  and 96.6 millimetres fell at St. John’s International Airport
The 200 millimetres of rain that hit Argentia is more than historic rainfall amounts. This, combined with the fact that most drainage and culvert systems on secondary roads were designed to withstand a 50-year storm and other factors, such as the amount of vegetation in the drains and the steepness of the streams coming across the highways, all worked to cause washouts and damage not even imagined at the time of the design and placement of the infrastructure.

In St. John's, 90 millimetres of rain flooded city streets and blew open manhole covers. The storm forced the cancellation of the annual Royal St. John’s Regatta, one of the oldest continuous sporting events in North America, which features dozens of rowers and draws tens of thousands of spectators to Quidi Vidi Lake in the heart of the city.

Firefighters dedicated themselves to helping the residents of the community for a number of days during and after the storm. Reflecting on the events, Lorne Collins, a fire captain and training officer with the Placentia department, says while the hours were long and mentally and physically demanding, he doesn’t remember feeling tired.

“It was almost surreal. The events motivated the crew to work to the best of our ability. [We] kept evaluating the present and looking ahead to the future thinking about what might happen next and how we would handle the situation. But when you stopped for a break, you stopped hard and lullabies were definitely not required.

“It was gratifying to see how many groups and individuals co-operated during those couple of days,” Collins said. “When things started getting back to normal it felt good knowing that you were a part of trying to make such a terrible situation better.”

Placentia firefighter Matthew Power says he will always remember his involvement in the response to Chantal.

“The response to the storm was completely different than any fire or mishap we have dealt with since joining the department. It proves that we need to be prepared to respond to any type of emergency that may occur.”

Mayor Hogan said the immediate reaction of the fire department was a clear demonstration of the professionalism and efficiency of its members. “I am sure that many accidents were prevented by their presence and safeguarding of the affected areas. The continuous call to serve over and above regular duties and the constant availability of the members in the time of need is a service residents should give thanks for every day.”

For Chief Power, the longtime nagging sense that the Placentia department should get some sort of rescue boat in case of flooding is now likely to pass muster with municipal officials.

“Was there anything we learned? Well, we have been talking for two years about a watercraft and if we had a watercraft that morning it would have made us a little more independent,” Power said. Instead, the department had to rely on the good graces of residents to lend out their boats.

More submersible pumps would also have been useful, Power said.

“Communication was identified as one of our shortcomings,” Power acknowledged. In addition, some municipal services had just moved into a new town hall and the Emergency Operations Centre had some communication problem of its own.

“It’s something that’s going to go into next year’s budget, to identify the communication shortcoming and get us a little bit of extra equipment when it comes to pumps and the ability to work on the water.”