Inside the Gore booth at FDIC in Indianapolis, a lanky, boyish-looking firefighter – no more than 22 years old – sidled up to the counter to listen to product specialist Holly Blake explain the benefits of the company’s particulate-protecting hood. 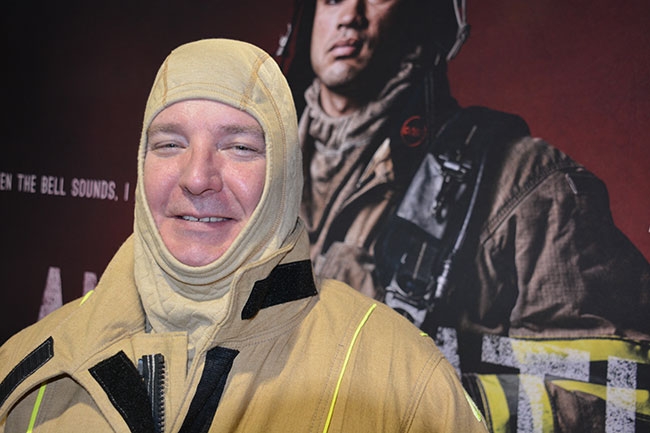 Manufacturers previewed particulate-protecting hoods at trade shows in April and May. The hoods contain a barrier to restrict the passage of harmful Prevention is the most important aspect of fire service

The firefighter had two years at a Midwestern career department; he had been a volunteer before that.

He said he knows senior firefighters who are dying of cancer, and he is having no part of it.

“I want protection from the carcinogens,” he said, handling the multi-layer hood with a built-in barrier to prevent particulates from passing through the fabric and being absorbed by the skin.

Deputy Chief Shawn Sweeny was at FDIC looking for the same protection for his volunteer firefighters in New Tecumseth, Ont.

“I’m down here looking at, from an operation perspective, the changes in personal protective equipment to protect our firefighters from exposure to cancers,” Sweeney said.

Most manufacturers of personal protective equipment – Gore, Honeywell, Innotex, PGI, and Fire-Dex, for example – are showing particulate-protecting hoods at trade shows across North America this spring and summer. All the hoods are similarly shaped, with bibs that extend well below the bunker-jacket collar. Yet each is unique.

None of the manufacturers guarantees 100 per cent particulate protection or claims cancer prevention, but all boast research and testing that show the volume of particulates that reach the skin is greatly reduced when firefighters wear the new hoods.

Most PPE manufacturers have also incorporated snowsuit-like elastic linings at bunker-gear arm and leg openings and at the waist to prevent particulates from creeping in.

The key, says Rob Freese, the senior vice-president of marketing for Globe, is to protect firefighters from experiencing heat stress and then build in all the other necessary health and safety measures – a fine balance of comfort, functionality and particulate protection.

W.L. Gore and Associates Inc. debuted its particulate-blocking hood in Indianapolis, with much fanfare – a media event and a special pre-show unveiling at its booth.

According to Blake, who demonstrated the hood to throngs of firefighters at FDIC in early April, Gore’s barrier blocks more than 99.9 per cent of particles between 0.1 and 1.0 microns in size.

The hood, said Blake, exceeds NFPA 1971 requirements for thermal protection, retains performance after 100 wash cycles, and a slick opening at the base enables visual inspection of the protective layer for wear or tears.

The make-up of the protective barrier, in between the layers of Ultra C6 (black) and Nomex blend (white), is proprietary.

Blake said Gore’s hoods, which are manufactured and distributed by Majestic Fire Apparel, were developed based on firefighter feedback.

“Hoods can be a point of vulnerability when it comes to particulate protection,” Blake said.

“We drew on our extensive experience in barrier technology to develop a durable particulate hood. Our feedback from firefighters indicated that it was very important to maintain the natural feel of a traditional hood.”

Honeywell’s Life Guard particulate-resistant firefighting hood is different from other sock-style balaclavas; it’s a looser fit but the company’s press material says the stiffer fabric (a Nomex knit combined with Kelvar) allows for better airflow around the head and neck. The particulate liner is a moisture barrier – different again from other hoods that contain less rigid inner layers.

“It may look different,” Honeywell notes in its media handouts, “but the Life Guard Hood deploys just like a traditional hood and readily integrates with your self-contained breathing apparatus and turnout gear to ensure the highest level of protection.”

Other manufacturers promote a tighter, more head-hugging design, similar to regular Nomex hoods that have been on the market for years.

Fire-Dex’s H41 Interceptor hood uses DuPont Nano-Flex between two layers of fabric. According to the company, the hood blocks 95 per cent of particulates at .2 microns in size or larger.

All the hype over hoods is the result of a 2015 exposure experiment – the Fluorescent Aerosol Screening Test (FAST) – conducted for the International Association of Fire Fighters. All manufacturers are working to meet the modified standard test (known as ASTM F2299) that NFPA has proposed in the next edition of the 1971 Standard on Protective Ensembles for Structural Fire Fighting.

A couple of years ago, the IAFF commissioned full-ensemble particle exposure testing at RTI International in North Carolina. The evaluation involved a used turnout clothing system and SCBA worn by a test subject in a particle-laden chamber.

Individuals were subjected to a high-level concentration of silica powder particles tagged with a fluorescent tracer having a particle size ranging from 0.1 to 10 microns. Subjects performed several movements for 30 minutes, while particles were blown through the chamber at about 15 kilometres per hour.

“Following the exposure, the garments were wiped down and the ensemble carefully removed to avoid exterior particle transfer to the interior,” the FAST report said.

“Black-light photography of the individual without the ensemble before the chamber exposure and after the exposure provided a means for detecting where inward leaking occurred.”

In 2013, in Burlington, Ont., Capt. Steve Jones led a seminar for more than 125 area firefighters – the first of its kind in the province – about potentially lethal hydrogen cyanide (HCN) that clings to PPE. Balaclavas, Jones said, are the worst offenders because they come into direct contact with skin.

The Burlington Fire Department was a pioneer on HCN monitoring and was among the first to develop an SOG on the subject.

At that point, firefighters learned to wear their hoods and SCBAs during overhaul and to wash balaclavas regularly.

The FAST report, however, took particulate protection a step further, and manufacturers are now responding to firefighters’ demands for better gear.

Research and studies have clearly indicated that protective hoods are the most vulnerable pieces of PPE because they lack barriers to keep out particles.

According to PPE experts Jeffrey and Grace Stull with International Personnel Protection, Inc., the liner-less hoods coupled with research showing carcinogen buildup on firefighters’ skin, became part of the review of NFPA 1971.

When the revision process began, a group was charged to develop ways to minimize firefighter exposure to carcinogens.

Through the public input process, a proposal was made to add a new optional category of protective clothing to the standard, covering a particle barrier layer added to the hood. The group recommended that the barrier layer’s effectiveness be demonstrated through a standardized particle-filtration efficiency test with an initial target of 90 per cent effectiveness.

Fire-service experts involved with the working group recommended that installing a moisture barrier as part of the hood composite could reduce – or even eliminate – particulate matter from reaching the skin around the face and neck.

According to reports written by the Stulls, the increased layering of the hood and the further encapsulation of the firefighter’s head pose additional stress to an already physiologically challenged first responder.

“It was therefore suggested that a total heat-loss test be applied to these newly reinforced portions of the hood at levels far above those required for garment composites,” they said.

“In this way, the maximum amount of heat stress relief could be provided without compromising the particle holdout capabilities of the new hoods.”

The new hood products are more complex, use new materials and are consequently more expensive – retailing for up to $125.

The weight of the hoods, the ability to hear through the protective barrier, and the durability of the new technology are issues for consideration.

Manufacturers previewed particulate-protecting hoods at trade shows in April and May. The hoods contain a barrier to restrict the passage of harmful

carcinogenic material to the skin.