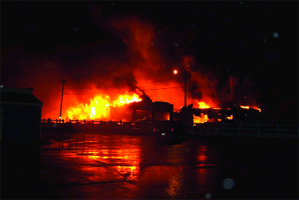 It was the biggest fire the department has ever seen and hopes to never see again. But many factors were in its favour as it fought to extinguish the massive blaze and protect surrounding buildings in the heart of Hartland's downtown.

On Saturday, May 7, 2005, the 9-1-1 operator received a call at 8:20 p.m. from a driving passer-by on a cell phone reporting smoke coming from the back corner of Craig Manufacturing on Main Street. The plant’s alarm activated as the operator was taking the call.

The fire department was paged out and arrived on scene within two to three minutes  with a pumper, tanker and 12 fire fighters, with the pumper catching a hydrant by the plant. The incident occurred just blocks from the fire station.

Size-up
The size-up by Fire Chief Michael Walton found a large manufacturing plant of wood construction, about 60 years old. Exposures included large propane tanks located at the rear of the building. The plant had extensive renovations and additions built over the years. It appeared the fire had started in the electrical room area at the front of the plant.

Two attack teams with 1-1/2" lines attempted an interior attack, one through the washroom area attached to the electrical room and the second went through the building entering at the work bays. A third crew, with a 2-1/2" attack line, also entered the building from the front.

Finding the fire was difficult for the crews initially. The seat of the fire was located in an electrical room and by the time crews made their way to it, the fire had grabbed hold in the walls and was moving up into the ceiling. After approximately 20 minutes the rapid spread of the fire forced the attack teams from the building.

Mutual aid called
At 8:40 p.m., mutual aid was called for a pumper from Woodstock. Within 10 minutes a request was made for Florenceville to also respond with a pumper and the same for Lakeville.

Upon arrival, Woodstock hooked a hydrant and Florenceville’s pumper set up by the St. John River, less than 1,000 feet from the scene to draft water to Lakeville apparatus. The town’s 88,0000-gal. reservoir was used up quickly by the fire fighting efforts during this incident.

Hartland’s rescue with an on-board cascade system was set up and was also used as the command post. The incident commander was Chief Walton.

Hartland’s second pumper was repositioned on High Street, behind and above the incident, and using 2-1/2" lines cooled the large 12,000-L propane tank just 20 feet from the building as well as argon, oxygen and other fuel tanks against the side of the plant, just six inches from the building. This operation was so successful the plastic placard on the propane tank did not even melt.

Heat vapourized foam
Initially foam was used, but the heat was so intense it evaporated before hitting the structure. As the fire progressed, various explosions could be heard from inside the plant as the fire reached acetylene tanks in various parts of the building. At one point a large fireball erupted when the fire reached the paint room.

The factors in the department’s favour included the wind direction, which was blowing from the southeast, away from the residents behind the plant. There was a heavy, cold rain falling that night. This rain helped to damper the embers blowing from the structure, which one fire fighter reported as being as large as your hand.

Fire fighters and other volunteers equipped with radios and cell phones were stationed on the rooftops of the Day and Ross trucking facility, the Courtyard Plaza (a shopping centre) and an Irving gas station, all directly across the street from the blaze, to monitor blowing embers.

The fire was declared under control at 1 a.m. Mutual aid departments were released from the scene around 3:30 a.m. Fire fighters remained on scene until 6 p.m. Sunday, conducting overhaul and extinguishing hot spots.

Evacuation zone
RCMP responded from Nackawic to Perth-Andover and nine officers handled roadblocks and the evacuation of 50 homes in a half-mile radius with volunteer help. Chief Walton ordered the evacuation as a precautionary measure at approximately 9 p.m., knowing of the explosive materials in the plant. Over 400 people, about half the town, were evacuated. The New Brunswick Bible Institute opened its doors for shelter and food for the evacuees.

While the fire station was in the evacuation zone, Hartland’s dispatcher, David Pratt was allowed to remain. Fire fighter’s spouses initially came into the hall to make sandwiches and refreshments for the crews in rehab at the scene. At one point, a Department of Natural Resources member arrived at the station and offered to help with the dispatching, which was gratefully accepted. As well, several volunteer fire fighters from other neighbouring departments – Glassville, Centreville and Bristol – who had been monitoring the incident on scanners, arrived with their own gear, reporting to command and were utilized as required.

Several members of Hartland’s junior Blazers assisted at roadblocks and later in cleaning up, but were not allowed at the incident itself.

Only a couple of minor injuries were reported by fire fighters, the worst being a sprained ankle.

Records saved
While the manufacturing plant was a total loss, the main computer file server with business records, CAD drawings and other vital operating information was saved. The plant, which manufactured attachments for heavy equipment such as snowploughs, employed about 85 people. It has subsequently been rebuilt and reopened for business recently.

The investigation, lead by Stu Barry of the Fire Marshal’s Office, points to an electrical problem in the plant’s electrical room and foul play has been ruled out.

As a result of this incident, Hartland will construct a new 250,000-gal. reservoir, beginning this spring.

The department
The Hartland (N.B.) Fire Department has 29 volunteer members under the command of Fire Chief Michael Walton and Deputy Chief Fred Roberts. It protects a town of 1,000 plus a rural population of 5,000 from one central station, 120' by 65'  with four double-deep bays, built in 1999. Running 75-100 calls per year, about a quarter of which are MVAs, it serves a section of the Trans-Canada Highway, two bridges, one of which is the world's longest covered bridge, a wooden structure. The town itself has a hydrant system. On the apparatus floor are a 1050-Igpm (1,000-gal.) pumper, a 625-Igpm (1,200-gal.) pumper-tanker, a 2,800-gal. tandem tanker with a 275-Igpm PTO pump, a rescue carrying heavy hydraulic tools and a personnel van with eight airpacks and an on-board cascade system. HFD also maintains an eight-member water rescue/dive team with a Zodiac powered by a 40-hp Mercury outboard.