Imagine a remote, medium-sized city in a forested region in Canada. It’s only late April and you’re well into a dry, hot fire season. Coupled with a mild winter that saw little precipitation, and you’re already dealing with a number of small fires within your vast fire service area. 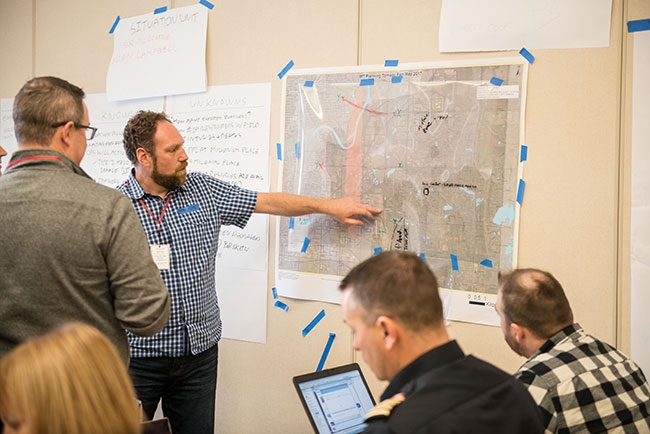 Maintaining a common understanding of the current situation can be done through traditional maps An Edmonton training academy has put forward ICS Canada position-specific courses. By Jason Greidanus

Before you know it, one of those fires has turned into the Big One, and your Emergency Operations Center (EOC) has stood up to manage fire response operations and evacuation of the population. Too late you’ve realized that your team hasn’t had enough training or experience to manage the scope of these problems, and the call out to your neighbouring municipalities has yielded some people with Incident Command System (ICS) training but little experience in the EOC support functions. Added to that is the fact that these well-intentioned responders have never worked together as a cohesive team before; in fact, most of these people are just meeting each other for the first time.

Not a hard stretch of the imagination, considering the magnitude and frequency of weather-related disasters in Canada recently. The size and severity of winter storms, wildfires and flooding impacting regions rather than individual communities, has stretched the abilities of organizations to respond quickly and appropriately. Regional response at an EOC level with multiple agencies working together is becoming the norm. While higher levels of ICS training and experience (up to the 400 level), are becoming more common in Canada and encouraging agencies to become interoperable in these situations, there’s still a gap when it comes to ICS position-specific training and working together as a cohesive team in an EOC.

Experiences in Slave Lake wildfire (2011), High River flood (2013), and the Regional Municipality of Wood Buffalo wildfire (2016) brought the reality home, shaping the discussions between the Alberta Emergency Management Agency (AEMA) and municipalities within the province. The specialized municipality of Strathcona County, situated just east of Edmonton, contributed members of an Incident Management Team (IMT) to all three of those events and learned firsthand the need for training and experience prior to large-scale disasters. Unfortunately, the only option was sending people to the United States for ICS position-specific training, which was cost-prohibitive and resulted in only small numbers of qualified staff. The need for a “made-in-Canada” solution was becoming more and more evident.

In 2017, thanks to a partnership between AEMA and Strathcona County, the Edmonton-region hosted the first Incident Management Team Academy of its kind in Alberta. The concept was simple: offer a number of ICS position-specific courses such as Planning Section Chief, Logistics Section Chief, Finance/Admin Section Chief, Resource Unit Leader, and Situation Unit Leader courses, combined with a capstone exercise at the end to practice the skills, all meeting ICS Canada curriculum standards.

AEMA grant funding and support was key to putting this event on, as was Northern Alberta Institute of Technology (NAIT) resource support from EM diploma students helping to conduct the exercise, ICS Canada for developing the curriculum for the courses in time for the event, and staff from across Strathcona County who helped plan and execute the Academy.

It seemed fitting that the approach to planning this week-long ICS training should align with ICS principles, and so the whole event was put together through the use of ICS. An assembled team of ICS-trained staff, over the course of the year leading up to the Academy, developed priorities, problems, objectives, strategies, and tactics. Operational periods of several weeks were designated in order to achieve the planning milestones necessary to organize the courses, catering, accommodation, instructors, and tuition fees. These plans were captured ultimately in Incident Action Plans (IAPs) that directed the staff and students throughout the event.

ICS Canada played a big role in ensuring that the curriculum for the five courses was approved in time for the event, but that left the question of finding qualified, experienced instructors to deliver the content. Finding 10 instructors that were qualified to teach the five courses and had experience with an IMT Academy-type event was challenging to say the least. To answer this need we turned to our partners in the United States, namely the Utah Department of Public Safety, which had previously run a number of these events. Through them we arranged to have a cadre of instructors join us to teach the material.

The instructor team from Emergency Training Group (ETG) based in Utah demonstrated this experience in a number of ways; not least of which by having a scenario developed for the students to apply to the classroom material. To reinforce the Planning P process, students led the meetings and briefings in the daily operational routine, such as the command, planning, and tactics meetings, plus giving the operational period briefing at the end of each day. In the classroom, the instructor team brought firsthand experience with ICS as applied in a number of high-profile US-based disasters. It can’t be emphasized enough how the instructors from ETG contributed to the success of the event.

The daily IAP and reinforcement of the Planning P across the courses left students well-prepared for the capstone exercise on the final day. The scenario was built around the 1987 Edmonton tornado, including current development and infrastructure, which resulted in far more significant impacts to communities in its path. The students were divided into four Type 2 IMTs of approximately 25 members each and placed in the roles they had learned that week, augmented by EM practitioners from across the region to round out the teams. In addition to the Command and General Staff ICS positions, there were Emergency Social Services (ESS) representatives placed into the Operations Section in order to focus the efforts on human impacts.

The scenario commenced with an Agency Brief given by the Authority Having Jurisdiction, outlining the expectations of the team. The teams then split off into their respective spaces to commence the Planning P and IAP creation. In order to simulate the concept of an IMT giving EOC support to a jurisdiction affected by disaster, the EOCs were simply classrooms in the local community centre. The IMTs had to apply ICS principles using materials, forms, and a space that they could acquire on short notice, much like an EOC in a disaster zone might need to do after relocation.

The exercise director ran the scenario with the assistance of the NAIT EM diploma students in a simulation cell, with the instructors offering coaching and mentoring to the IMTs. At the end of a busy day each team had created an IAP for directing operations on the following day, the students had gained an appreciation of how to support an EOC using the IAP and ICS principles.

For the first time in Alberta, a training academy had brought together ICS Canada position-specific courses, culminating in a capstone exercise, focusing on inter-organization collaboration. There is now a viable network of qualified and experienced emergency management professionals that can more effectively come together as an IMT during any regional disaster.

Jason Greidanus is the deputy director of Emergency Management for Strathcona County, Alta. He is also a program advisor to the Northern Alberta Institute of Technology IMT Academy taking place in Edmonton from Nov. 5-9, 2018.