May 2016 - There’s one in every station – the ticking-time-bomb firefighter whose demeanour slips Jekyll-and-Hyde-like between everyone’s best friend and look-at-him-sideways and he’ll snap. 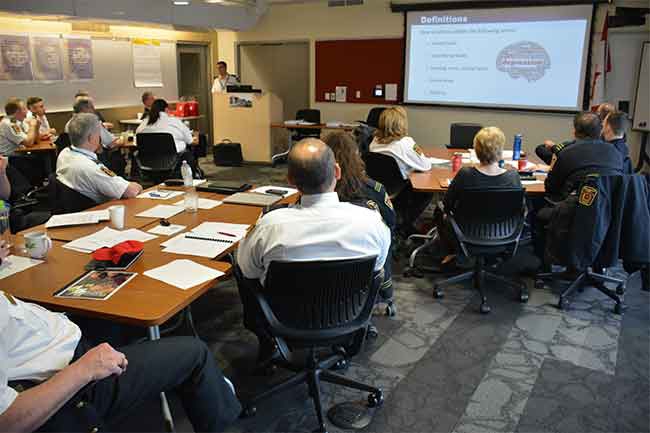 Mississauga Fire and Emergency Services offered the R2MR program to its supervising officers in April A program being rolled out across Canada can help firefighters build resilience and recognize when colleagues need help. By Laura King

He’s a great firefighter – a stickler for SOGs and the department’s biggest safety advocate; he’s funny, sometimes loud, crusty and gruff, but he’s got your back. You’d trust him with your life.

Lately, though, he’s been flying off the handle over little things and the crew is steering clear, avoiding doing or saying anything that might aggravate him. What’s more, he’s showing up for shifts looking tired and disheveled.

He’s going through a rough patch, you figure – and it will pass.

Probably not. More than likely the firefighter is having trouble at home, doing things – drinking or gambling – that affect his sleep, and isn’t dealing well with whatever’s eating at him. More than likely, he needs help, but is too proud and stubborn to ask for it. Worse, he doesn’t want to be labelled as the guy who couldn’t cope.

The crew starts complaining and patience wears thin. The stellar firefighter who always led by example is chewing out colleagues, slacking off, and everyone’s covering for him.

What do you do?

The Road to Mental Readiness (R2MR) program developed for the Canadian Armed Forces and adapted for Canada’s fire services, gives firefighters two critical tools: a process for building resilience to deal with trauma or stress, and the skills to recognize when they, or colleagues, need help.

Most mental illness among first responders is not post-traumatic stress disorder, according to the Mental Health Commission of Canada (MHCC); rather, it’s a combination of personal challenges, daily hassles and operational stress.

And most fire-service leaders have no idea how to help a firefighter or colleague who is experiencing more stress than he or she can handle.

The R2MR program was rolled out in February by the Ontario Association of Fire Chiefs (OAFC) – a train-the-trainer session taught by mental-health commission experts, followed by courses in North Bay (volunteer) and Mississauga (career); several more are scheduled. (Some fire departments, such as Kitchener Fire, have already brought in R2MR training and programs in partnership with other mental-health professionals and organizations.) Fire services in Alberta and British Columbia have also embraced R2MR; the Canadian Association of Fire Chiefs is working with the mental health commission to create a system for departments outside Ontario interested in R2MR training.

The goal of R2MR is similar to that of the fire-service wide incident-command system: to get everyone, from firefighters to chiefs, speaking the same language.

Mississauga Fire and Emergency Services put its supervisors through R2MR in April and plans to offer the program to its 600 officers and firefighters. Mississauga already has a robust peer-support team, critical-incident stress management trainers, and other mental-health tools, but Chief Tim Beckett says R2MR adds consistency.

“The key for us is structure,” Beckett said in an interview. “It’s not new to our organization, the aspect of mental-health training. This program allows us to build on our skill sets.”

R2MR comprises an eight-hour leadership program for officers, and a four-hour primary session for firefighters. Logically, the eight-hour leadership segment must be taught to a department’s officers before the four-hour primary segment is offered to firefighters. The curriculum is firefighter-friendly and uses adult-learning principles – there are lots of hands-on exercises, discussion, debate, and videos; course material was tweaked for fire personnel with input from departments in Calgary and Cornwall, Ont.

As with everything in fire, there are SOGs to ensure the integrity of the program: both the eight-hour and four-hour programs must be taught in single, one-day sessions; there are a maximum of 24 students per course; and costs per participant, which vary depending on grants, sponsorship and arrangements with the organizers. In Ontario, courses must be booked through the Ontario Association of Fire Chiefs; certificates of completion are awarded.

Cumulative stress is the worst, the mental health commission says in the R2MR manual; stress leads to exhaustion and burnout when it occurs too often, lasts too long and is too severe. Exhaustion, leads to bad performance. And bad performance results in departments losing good firefighters to lengthy and costly stress leaves.

The numbers, according to the MHCC, are staggering: 45 per cent of the population will experience mental illness – anxiety, depression or substance abuse. Given the stoic nature of first responders and the stigma surrounding mental illness, the likelihood of firefighters suffering in silence is significant.

What’s more, the World Health Organization predicts that by 2030, depression will be the No. 2 health condition in the world, surpassing heart disease. Figure, then, that a hefty percentage of Canadian firefighters – and your department’s members – will experience some form of mental illness.

The crux of the R2MR program is the mental-health continuum – a colour-coded sliding scale to help firefighters recognize when a colleague is experiencing significant stress.

Firefighters in the green zone are healthy – doing their jobs, being good citizens, spouses, parents and community members. It’s crucial, the MHCC says, to know your people – their personalities, how they react to calls and stress – in order to recognize changes in behaviour.

Firefighters who become irritable and anxious are reacting or injured – they’re in the yellow or orange zones. Those who lash out, shirk duties, turn to alcohol or drugs, are ill and in the red zone.

The objective of R2MR is to educate fire-service leaders about mental illness and, most importantly, how to prevent it, so they can keep their people in the green zone. The program provides skills and tools to recognize when people are drifting toward (or are already in) the red on the continuum; behaviour changes are key.

The program provides a step-by-step process for approaching a firefighter whose behaviour has changed, called the ad hoc incident review, or AIR: acknowledge, inform and respond.

R2MR spells out a system for officers to help members at every stage of the mental-health continuum, known as Triple S (similar to the three lines of defence): shield; sense; and support.

And the course gives everyone who participates a tool, aptly named The Big Four – the steps to build resilience: goal setting; visualization; self-talk; and tactical breathing.

“This program increases resiliency,” said the MHCC’s Michael Pitreus in an interview, “so that when people are faced with trauma, and prolonged trauma, they are much better prepared to deal with it.”

Using Navy Seals as examples, with a bit of brain science, the course material and videos teach R2MR participants how to control fear and the fight, flight or freeze responses to trauma.

R2MR is suitable for career, composite and volunteer departments, for rookies or veteran firefighters, for new or longtime chief officers. Critical to the success of R2MR in career departments is buy-in from the firefighters association.

Mississauga IAFF Local 1212 vice-president Ryan Coburn said the union is anxious to end the stigma around mental illness and the R2MR program is known as a catalyst for change.

“We’ve recognized that behavioural health issues in the fire service are increasing and are not going to go away,” Coburn said in an interview. “And we know that by ending the stigma and bringing training programs out that it makes our people stronger and, in this case with the R2MR, more resilient.”

In Ontario, R2MR is part of a two-pronged strategy: prevention and treatment. On April 5, just days before the official launch of the R2MR program in Mississauga, the Liberal government passed presumptive legislation for post-traumatic stress disorder; New Brunswick has introduced similar legislation and Alberta and Manitoba did so in 2012 and 2015, respectively. While the Ontario Professional Firefighters Association (OPFFA) lobbied for the legislation to ensure access to treatment, the OAFC focused on a prevention strategy.

“The real investment needs to be in the up-front, proactive, preventative education,” OAFC president Matt Pegg said in an interview. “Our goal has been to give first responders the education and tools  to prevent illness and the resilience, tools and education to stay healthy, and recognize when they need.”

Labour Minister Kevin Flynn said in an interview the government insisted on the two tenets: prevention; and treatment through presumptive legislation.

“The most damning thing about PTSD,” Flynn said, “is that you have post traumatic stress, you can deal with it properly, you can cope with it, you can manage it, but you’ve always got it.

“And it just strikes me that if that’s the prognosis, you don’t want to get it in the first place.”

“What we’re seeing on all health-and-safety issues is an increased demand for accreditation and standardization,” Flynn said, “so we know the training that we get is similar across the province . . . but also that there’s a standard of quality that’s being met. As long as we know that [R2MR] was signed off on by the fire chiefs themselves, that good enough for us; as long as we know that there’s a credible source behind that signature and the accreditation.”

The Association of Municipalities of Ontario (AMO) has said presumptive legislation for PTSD will cost cities and towns tens of millions of dollars. Naturally, AMO supports prevention programs and had the government’s ear, as did the union.

“The prevention part is where it’s going to pay off,” Flynn said. “And that’s why I was holding out for so long; the opposition parties were asking me to just pass Bill 2 – just get us presumptive legislation and everything will be fine.

“And that just meant it was OK for you to get PTSD because we were going to treat you only after you did, and that was the wrong message. We wanted to say, if you get PTSD, you’ll get treated as well as we can possibly treat you, but we don’t want you to have it in the first place.”