It’s almost that time of year again when firefighters are asked to put down their razors and grow wonderful or wacky whiskers for The Great Canadian Fire Challenge! All money raised goes to the Movember Foundation, which funds men’s health programs and promotes awareness of prostate and testicular cancer and mental health. 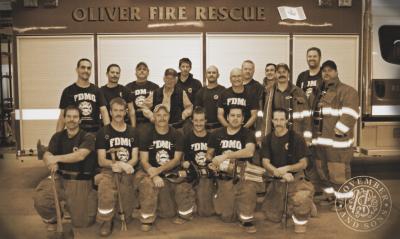 It’s almost that time of year again when firefighters are asked to put down their razors and grow wonderful or wacky whiskers for The Great Canadian Fire Challenge! All money raised goes to the Movember Foundation, which funds men’s health programs and promotes awareness of prostate and testicular cancer and mental health.

Edmonton Fire is the reigning champion of The Great Canadian Fire Challenge and its members are looking to defend their title this year.

“It was a long time coming because three years in a row we had always come in second,” Edmonton firefighter Joell Whitson said in an interview.

Whitson brought Movember to his department long before the official firefighter challenge spread across Canada; even before most people had heard of the cause.

“It was neat and it was weird for people to see six guys get out of a fire truck with large moustaches,” he said. “The guys loved it.”

The department is now one of many across the country with members growing and grooming ’staches to delight their communities, raise money, and promote men’s health. The fire challenge increases the stakes by pitting departments against each other.

“We are a competitive bunch and we have competitive natures so it’s nice to be in this challenge together and to be up against each other,” Whitson said.

But that shouldn’t discourage small departments from signing up, he added. Support for mental illness and cancer is a win for all firefighters, who are at a higher risk of both because of their occupation.

“It’s about us and it’s time we step up and do something for ourselves,” Whitson said.

For the third year in a row, the volunteer fire department in Oliver, B.C., has a team signed up for the fire challenge,

“It’s great because it’s a charity so it benefits men’s health but it also gives us exposure in the community,” said Grant Stevely, one of about 30 volunteer firefighters who make up the Oliver Fire Department.

What’s more, Stevely said, it’s a chance for the guys to grow societally acceptable facial hair that won’t interfere with their SCBAs.

The Great Canadian Fire Challenge begins Nov. 1 and runs the full month. Learn more about how to get involved here.

More than 45 fire department have already signed up. What are you waiting for? Register your team today!

Fire Fighting in Canada wants to post your mo pictures, starting with the no-mo shots of your clean-shaven self. Send before pictures to Maria Church by email at mchurch@annexweb.com