May 2016 - Last summer, Luanne Donahoe was worried about her son, Josh. The 17-year-old’s father, a firefighter, died in the line of duty when Josh was nine, and he has had a rough time dealing with his absence. 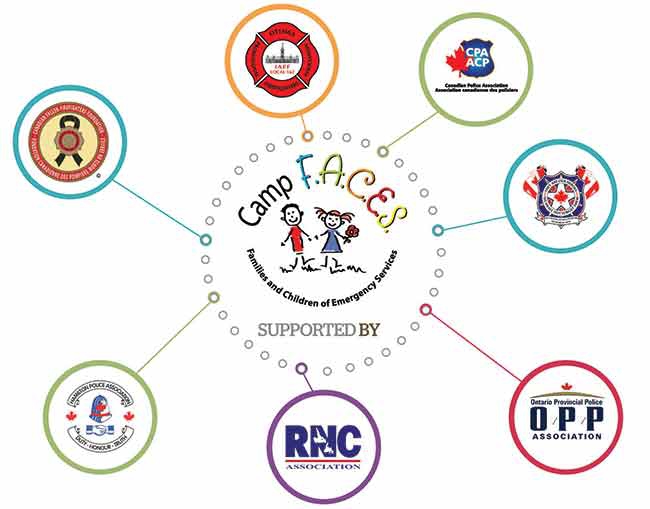 Bullying in school led the teenager to develop social anxiety, so Josh enrolled in cyber school and mom and son moved to a new community in 2014.

“Other kids don’t understand what he’s gone through,” Donahoe said, “and they can’t begin to comprehend it unless they’ve experienced it themselves.”

On Aug. 21, Josh and his mom arrived at Camp FACES – families and children of emergency services – organized for the first time by the Canadian Critical Incident Stress Foundation. Held at Fern Resort in Orillia, Ont., Camp FACES hosted about 50 children and spouses of fallen first responders from across Canada. The Donahoes were sponsored to attend by the Canadian Fallen Firefighters Foundation.

Andy MacDonald, interim general manager of emergency services for Guelph, Ont., is an advisory board member for Camp FACES and said board members were initially worried that families would be shy and take time to open up; but that was not the case.

“You’d swear it was a family reunion on Day 1,” MacDonald said. “People were laughing, sharing stories and getting to know one another . . . the noise level was palpable, in a good way.”

The only explanation, MacDonald said, is that the campers, regardless of age, gender, and history, had a shared experience that created an immediate bond. For most of the family members, the camp presented the first opportunity to interact with people who understood their pain.

Day 1 was a bit more difficult for Josh, who was one of only a few teenagers attending and anxious about not knowing people, or what was going to happen that week. Donahoe said her son experienced a panic attack in his room during the first gathering and had to be coaxed downstairs to meet everyone.

“I told him to just take some deep breaths, and said, ‘Why don’t you come down? You can always leave, but give them a chance’,” Donahoe recalls. Mom and son later returned to the gathering and introduced themselves to the first people who looked close to Josh’s age. Those people were MacDonald’s daughter, son and son’s girlfriend, who were all camp counselors.

“Josh hit it off with them right away,” Donahoe said. “There was really no turning back after that; he was full speed ahead. He participated in everything and he just loved it.”

Donahoe said it was incredible to watch her son’s transformation over just five days.

“He went from being a kid who felt like nobody understood what he was going through, to having friends and feeling like he’s understood again,” she said. “Josh told me that Camp FACES was the most important, life-changing week of his life since his dad died.”

MacDonald, too, witnessed the effect Camp FACES had on Josh.

“The camp and his association with the young counselors – because they were inseparable – turned his life around,” MacDonald said.

The five days of camping were planned to the hour with activities such as creative arts, music, sports, games and relaxation time. Those activities were not designed as counselling or support sessions, rather as fun, interactive ways for youths and spouses to get to know each other in a friendly, relaxed environment.

“The idea,” MacDonald said, “was to bring families together to give them a chance to get to know each other, to spend time with people who have been through similar circumstances, because that is what they don’t have at home.”

Four camp counselors took care of the children during the day, and every evening the campers would gather around a fire and share stories, which was perhaps the most therapeutic time for spouses, MacDonald said.

“It was very relaxing and very important for the relationships at the camp,” he said.

Donahoe said getting to know the other spouses over the course of the camp was eye opening for her as a widow.

“It was such a relief,” she said, “because you feel like you’re the only person in the world who reacted certain ways or did certain things. I was so glad to have spoken to some of these moms and learn that they too had experienced similar moments.

“That week at Camp FACES was the first time since my husband died that I could completely relax knowing that my son was in a supportive, accepting environment and there wasn’t one moment that I needed to worry about him – it took the pressure off and I was so grateful.”

Renee Jarvis with the Canadian Critical Incident Stress Foundation (CCISF), who was a primary organizer of Camp FACES, said the idea behind the camp had been percolating in her mind for about 20 years. Jarvis formerly worked for Hamilton Police Service and sang in the police choir, which regularly performed at funerals.

“Singing in the choir I would be positioned at the front of the church and seeing the families and all of the young children, I often thought: what do we do for them and what happens after the funeral?” she said. “And the reality was, nothing.”

Jarvis joined the CCISF in 2011 and said she knew then the national organization would be the vehicle she needed to create a program for families of fallen first responders. Once the idea took hold in early 2015, partners – individuals and organizations – were quick to jump on board as donors, sponsors and board members.

From an organizer’s perspective, Jarvis said, the inaugural camp was even more successful than they were hoping.

“Being the first of it’s kind in Canada ever, we didn’t know how the families would react,” she said. “I think we were all really taken aback by the impact it had on not just the families, but us as well.”

MacDonald agrees. “For me it was absolutely life changing,” he said. “It was one of the most rewarding things I have ever been involved in.”

In the future, Jarvis hopes to expand the FACES umbrella to include an education bursary as well as programs for families of first responders who are living with post-traumatic stress disorder.

“We feel that if we can help the families and provide them with some of the tools and resources we would be able to help them strengthen that family unit,” Jarvis said.

The next Camp FACES is Aug. 19 to 23, and will once again be held at Fern Resort. The cost of sending a family of one spouse and one child to the camp is about $3,500, which covers everything from airfare to food and activities.

MacDonald urges individual fire services to consider fundraising to send a deserving family; the benefits of doing so are best explained by those who attended.

During the final goodbye gathering on the last day of Camp FACES organizers turned the mic over to campers to share their thoughts. Donahoe vividly recalls what happened next.

“Josh gets up, grabs the microphone and stands in front of the room talking to everybody . . . just telling them how he considers them his family now, telling them how Camp FACES changed his life and how grateful he was,” she said. “It still brings tears to my eyes.”

Learn more about Camp FACES and how to donate at www.campfaces.org and connect with CCISF on Facebook and on Twitter @CCISFlive.