Vaughan Fire and Rescue Service (VFRS) was the first department in Ontario to have all its firefighters certified to the province’s firefighter curriculum after the program was introduced in 1993. Now that Ontario has transitioned to NFPA professional qualifications, Vaughan has become the first career department in which all firefighters are certified in NFPA 1006 core competencies for technical rescue – all 300 of them. 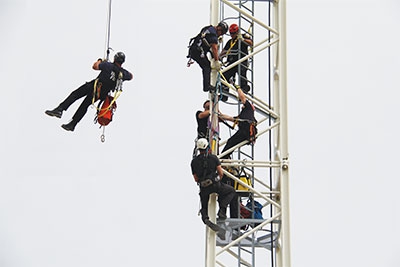 In January 2014, VFRS rolled out training programs that enhanced the technical skills of the firefighters. The first step was to ensure that each firefighter had the basic skills and knowledge for technical rescue. VFRS was the first fire service in the province to have all 300 firefighters tested by the Office of the Fire Marshal and Emergency Management (OFMEM) to NFPA 1006, Chapter 5 – otherwise known as the core requirements to enter into any NFPA 1006 discipline-specific technical specialty program, such as confined-space rescue, trench rescue, water rescue, or rope rescue.

All 300 VFRS firefighters wrote a one-hour, 100-question exam proctored by the OFMEM, which covered a range of topics from incident command to helicopter signals, and mass casualty triage protocols to rope equipment. A minimum score of 70 per cent was required to pass the theory exam. The practical exam was graded on a pass/fail basis; there was no notification about which specific skills from the job-performance requirements would be part of the test. Candidates were allowed to be unsuccessful on one attempt and retest to pass the skills portion. A second failure would result in a failure for the entire skills-testing portion of the exam.

“We are proud of all our firefighters who have gone through the testing process, and who have increased their professional standing in order to remain credible to their colleagues, city officials and the public they serve,” said VFRS Chief Larry Bentley.

The practical testing of performance objectives was conducted by the OFMEM to ensure that the skills proficiency was evaluated by a third party. All firefighters showcased their manipulative skills to a third-party evaluator by demonstrating specific skills and objectives safely and competently.

NFPA 1006 is the professional qualification document that details what knowledge, skills, and abilities individual rescuers need to know. NFPA 1006 identifies job-performance requirements for a variety of technical-rescue environments including rope rescue, confined space and water rescue. The purpose of NFPA 1006 “is to specify the minimum job-performance requirements for service as a rescuer in an emergency response organization.”

The VFRS has 10 fire stations, 12 frontline apparatus, and a minimum of 50 on-duty firefighters on each 24-hour shift. Four of the stations are designated as specialty halls, covering technical-rescue disciplines including rope rescue, water rescue, vehicle and machinery rescue, confined-space rescue, structural-collapse rescue, and trench rescue. Four other stations are designated as the backup for each of the specialty teams.

While firefighters graduate from training programs or colleges and are hired with NFPA 1001 (Standard for Firefighter Professional Qualifications), NFPA 1006 core competency training builds on that knowledge and expands on operational tactics used during an incident.

With more diversity in the types of technical rescue that fire departments are performing, and with new, specialized equipment, procedures and regulations, there are greater demands on rescue personnel to possess increasingly complex skills.

NFPA standards have become the norm for those who respond to technical rescue incidents, with the goal of providing a common framework for rescue training and operations, and limiting liability. Training is paramount to successful operations at incidents; this is why the VFRS decided to focus on the NFPA 1006 certification process.

The City of Vaughan is rapidly growing, with a population of more than 314,000; there are three major 400-series highways, the CN Rail yard, which is the largest rail yard in Canada, and the CP intermodal line, on which goods and people travel through the city’s borders every day. All of these factors contribute to call volume and the wide range of incident types.

With intensification within the city and a population that is expected to continue grow at a rate of 20 per cent over the next 15 years, the demands on the VFRS will undoubtedly increase. In addition, Mother Nature has tested our resources, equipment, personnel and rescue skills with the 2009 F2 tornado that affected 600 homes, the 2011 York Region flooding, and the 2013 ice storm.

Bentley says increasing the capacity of training and operations links the department’s level of service to its philosophy: “treating our citizens as customers, deserving of the highest quality of service.” That’s why, Bentley says, the VFRS expanded beyond fire suppression to the technical-rescue skills it provides.

Thirteen trainers selected from the floor were trained by Spartan Rescue Inc. to NFPA 1006 Chapter 6.2 (technical rope rescue), and these instructors rolled out the program in their own platoons. Regular committee meetings were held to address training and equipment issues, future training, and continuation of the training as an instructor group.

The skills-verification process is also about firefighter safety. Though the NFPA standard sets out job-performance requirements outlining required skills a rescuer must be able to perform, there is little guidance as to how to safely and efficiently perform the skills.

Having the OFMEM provide an external verification of skills added a layer of accountability to the level of competency maintained by members of VFRS. Management, VFRS firefighters and Spartan Rescue collaborated to create training resources including video tutorials, course guides, a photo library and practical training lessons to provide a consistent level of competency among all 300 members.  Equipment staging, department response SOGs and tactical worksheets were then created to provide a consistent level of customer service in technical-rescue emergencies.

“This training program is one of the many successful initiatives in a series, all of which has been attained with far less procedural turbulence than anticipated,” Bentley said.

Bentley said co-operation with the firefighter association was key.

“As a newly appointed fire chief . . . I reached out to the labour group. This has truly proven to be a defining move for us in the fire service. The leadership of the labour group had also recently experienced a change, and together we have entered into an open, honest and accountable partnership based on trust and respect for each of the respective labour/management factions.”

Although VFRS is proud to be the first fire service in Ontario to have all of its firefighters certified in NFPA 1006, Chapter 5, the true goals of the VFRS were to increase the level of health and safety of our firefighters, to establish a commitment to the technical disciplines we provide, and to ensure we deliver the highest level of service to the citizens of Vaughan. The VFRS has been successful in achieving these goals by working together as a team.

Deputy Chief Deryn Rizzi of Vaughan Fire and Rescue Service is a PhD candidate at York University; her doctoral work supplements a master’s degree in disaster and emergency management from York and bachelor of education and bachelor of arts degrees from Queen’s University. Contact Deryn at deryn.rizzi@vaughan.ca