August 2015 - At 8:20 p.m. on Saturday, June 20, Barrie Fire Control in Ontario received a call for assistance – a hiker had become trapped in a crevasse in a popular recreational area. Little did I know when my pager activated that approximately 50 firefighters from Clearview and Barrie and, later on, from Toronto, would spend the next 14 hours involved in a rescue – the most challenging rescue of my 20-year fire-service career. 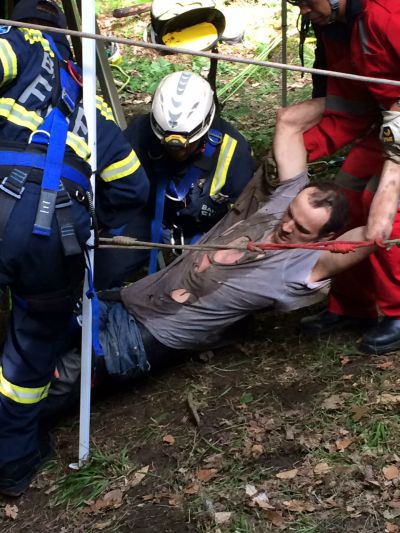 Crew 53, Rescue 14, Ontario Provincial Police and County of Simcoe Paramedics arrived at 9:09 p.m. at the location – about 1.5 kilometres through a narrow walking trail from the road – via multiple trips aboard ATV 1, a 2014 Kubota two-seater tracked vehicle.

Initial reports were confirmed – an individual was about 12 metres (40 feet) down and six metres (20 feet) horizontally trapped underground in the Nottawasaga Bluffs Conservation area.

The man was discovered by two hikers who heard his voice and were able to identify his location, call 911, notify his wife, and direct first responders to the scene.

The individual’s wife directed fire crews in from a south location; the crew from Squad 45 and paramedics walked 20 minutes through the trails with medical bags and equipment and met up with the crew from Rescue 14 and ATV 1, which had entered from a north location.

The responding crews on ATV 1 and Tank 53 made patient contact and attempted to lower water down the crevasse but that was unsuccessful. One Clearview firefighter maintained constant contact with paramedics.

The firefighters investigated alternate entrances to the crevasse and, as darkness was falling, rescuers began to shuttle in equipment and lighting.

A rescue technician continued to talk with the patient, 30-year-old Seth Rowe, but crews were unable to reach him; the crevasse was too narrow – just 20 centimetres wide.

Crews were able to get water to the patient at 10:37 p.m. At this time, Barrie Fire requested more manpower and managed to get a rescue harness to the patient.

As Barrie Fire’s technical-rescue members worked in the hot zone, at 11:38 p.m., Clearview Fire members picked up equipment from Stayner Rental (the owner had been contacted and had returned to his business from his cottage) – portable heaters, propane tanks and hose to get heat down in crevasse; light did not reach the depths of the crevasse and there was snow and ice in the patient’s area.

Heaters were lowered and heat was delivered laterally by hoses to the patient, along with more water and energy bars.

The rescue area was remote. As I travelled on the Kubota ATV the headlights showed our way through the winding walking trails, the starry sky disappeared under the tall, lush trees, and LED lights appeared in the distance, with glow sticks marking the end of the trail like an airport landing strip.

Generators hummed and the smell of a camp fire filled the air – the patient’s wife and the two hikers who found the individual in the crevasse were huddled around it.

Accountability was established and tarps were set up for staging equipment. Each person on scene had a specific duty.

iPads were used on scene to monitor weather; there was rain in the forecast for early morning so tents and tarps were set up to protect the patient from elements.

Throughout the night an open line of communication was maintained with the wife and the hikers regarding the status of the rescue, and CTV Barrie was given permission to document the rescue story from a safe distance.

Barrie Fire had managed to raise the patient several feet but couldn’t bring him up any further, and medics were concerned about his well-being due to the cold.

In collaboration with Deputy Boyes from Barrie, additional technical-rescue resources were requested at 3:32 a.m. from Toronto Fire Services through the Provincial Emergency Operation Centre (PEOC).

Toronto sent two rescue squads – Pumper 143 and Squad 143 – with eight personnel (some are members of Toronto’s Heavy Urban Search and Rescue team and happened to be on shift), along with Deputy Chief Matt Pegg; they arrived on scene at 5:30 a.m. and led the rescue with Barrie Fire in the hot zone.

During the rescue, food from Tim Hortons in nearby Stayner was brought to the scene. ATV 1 completed 60 trips to shuttle equipment and personnel to and from the location; this vehicle logged 185 kilometres on off-road trails.

Extrication
During the extrication attempt, Rowland – a rescue-sector officer, rescue specialist and squad leader for Toronto’s HUSAR team – would yell, “Quiet,” at which time all generators and talking ceased; this enabled rescuers to hear the patient and communicate to him their next steps.

At 6:14 a.m., members of Toronto Fire and Barrie Fire began an aggressive extrication attempt with rock removal by air chisel; air bags were used to protect the patient. Clearview Fire supported with accountability and equipment operation.

Rescue technicians inverted into the crevasse and used the air chisel to expand its width. The space was too tight for crew members’ eight-inch Petzl helmets – “we couldn’t get our heads in so we knew we had to chisel,” Rowland explained. “The three guys who were down there were inverted and had one hand on the air chisel and chopped away in the rock to make a hole for him. It’s not something we practise all the time but it worked.”

Toronto Fire had set up another anchor and rigging plate to the left of the main crevasse, “and using Barrie’s rigging plate, we were able to bring him up,” Rowland said.

Toronto Fire rescue technician Tim MacDonald made contact with the patient at 9:28 a.m., and the patient was extricated and in the care of paramedics at 9:41 a.m., 12 hours and 21 minutes after the emergency call was received.

Relief squads from Toronto Fire and Ontario Mine Rescue – notified via the PEOC – had been called proactively; they were stood down en route upon notification that the patient had been extricated.

A scribe had also been called to take notes had the operation continued, and Simcoe County fire co-ordinator Dan Heydon was updated throughout the rescue.

All rescue crews and emergency personnel cleared the emergency scene at about 12:30 p.m.

Essentially, Rowland said, the Clearview and Barrie crews were able to extend the patient’s viability by getting heat, water and food to him, which then enabled the technical crew to complete the rescue.

“They did enough to extend that golden hour, and all we had to do was extract him,” Rowland said. “It’s all about the timeline for us – timing is everything – if you can buy us more time we can affect any rescue; we can get to the guy. They got heat to him, food to him and that kept him strong and when he was ready we got him up.

“It was real positive co-ordination among the teams and everyone felt really good about doing a good job and pulling this guy out.”

The knowledge, training and expertise of the fire service technical-rescue teams is both obvious and impressive: Barrie and Toronto Fire worked side by side, in a seamless and impeccably co-ordinated manner, on the scene of a very complicated and complex rescue emergency.

This incident is a powerful reminder of the importance of professional qualification standards and standardized training.

As the only emergency-response agency with a mandate for rescue, it is imperative that the fire service in Ontario continues to drive the transition to the NFPA professional qualifications aggressively. This incident is clear testament to the value of standardized, professional training.

This incident also clearly highlights how effectively the incident command system can be expanded as an incident escalates.

Technical rescue teams – and HUSAR teams – operate as sectors within the framework of the existing incident command system. Incoming senior officers – in this case deputy chiefs Boyes and Pegg – were able to immediately provide assistance to the incident commander. Boyes and Pegg assumed responsibility for communicating with outside agencies that included the PEOC, Office of the Fire Marshal and Emergency Management, and Toronto Fire, which at one point assembled additional rescue equipment for deployment to Clearview in the event that operations were going to be extended.

– with files from Matt Pegg and Laura King

10:37 p.m.
Crews are able to get water and a rescue harness to the patient and Barrie Fire requests more manpower

11:38 p.m.
Clearview Fire picks up portable heaters, propane tanks and hose to get heat down in crevasse

6:14 a.m.
Members of Toronto Fire and Barrie Fire begin an aggressive extrication with an air chisel

9:41 a.m.
Patient is extricated and in care of paramedics

Fire Chief Colin Shewell has been in the fire service for 20 years – 16 in Springwater, Ont., and four in Clearview – as a certified firefighter, NFPA-certified fire officer, incident-safety officer, training officer, and deputy chief before becoming chief. Contact him at cshewell@clearview.ca