Dealing with the dangers of meth labs 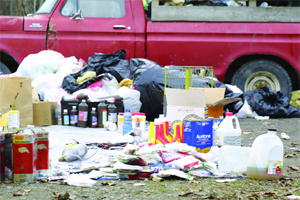 Due to the increased popularity of methamphetamines during recent years, the likelihood of fire fighters encountering a "meth lab" while on the job is growing. The very nature of the fire fighter's task routinely puts us on other people's properties, in and out of stranger's homes.  Today the chances of us discovering a meth lab or some of the precursors or chemicals used to make the highly addictive drug are on the rise … an alarming rise.

PHOTO COURTESY E. BROUWER
This picture ought to make the hair on the back of your neck stand up. The range of chemicals involved is wide and dangerous.

Above all, we need fire fighters to know how to protect themselves in an environment that may contain highly volatile chemicals.

Meth can be made from dozens of different recipes, but all the formulas have one thing in common – they require ingredients that are flammable and explosive. Often, recipes call for heating those same combustible chemicals just short of when they will ignite.

Ever since the rapid onset of methamphetamine production in western Canada, we've been educating particular groups of people – those whose jobs would lead them into and around homes, paramedics, police and fire fighters.  This is and must be an ongoing process.

This article will address two key points that up to this time have been overlooked.

And a warning for wildland fire situations – as if fighting a wildland fire wasn't dangerous enough – suppression crews have yet another reason to be cautious. Every pound of methamphetamine produced creates anywhere from five to seven pounds of waste. These waste products include solvents and corrosives.

From one news report:
"Mississippi Forestry Commission and the (U.S.) Bureau of Narcotics reported uncovering several containers of anhydrous ammonia and other meth precursors stored in capped PVC pipes and buried underground.  Several of the containers were melted during the wildfire. "It was pretty unnerving to go back there and see how close we ploughed to some of those pipes and tanks," said James Parker, Mississippi Forestry Commission crew chief in Jackson County. ‘This meth lab was pretty high-tech. They used cameras, to monitor activity near the lab. There were booby traps, and the tanks and pipes were camouflaged,' Parker said."

It is important enough to repeat, the ingredients for making methamphetamines are extremely volatile.

Laboratories are often times located in rural residences, farms and forest land to avoid detection by law enforcement.  Due to the likelihood of explosions, invisible poisonous gases and other dangers, Wildland firefighters must be especially cautious in areas where there could potentially be a meth lab.

Methamphetamines typically include ingredients such as iodine, isopropyl alcohol, Red Devil Lye, salt, drain cleaner and lithium battery ribbons. But other ingredients used in making meth should be of particular interest to suppression crews.

If mishandled, red phosphorous converts to yellow phosphorous that can ignite spontaneously. Various solvents such as chloroform, ether and Freon, also frequently used in cooking meth, are highly flammable.

One of the more common ingredients in meth is anhydrous ammonia. It is a common agricultural fertilizer, but exposure to this chemical can cause serious injury or death.

Operators or "cooks" have been known to store anhydrous ammonia in propane and acetylene tanks. This type of storage causes the valves to discolour to a bluish tint and is often a good indicator that meth production is taking place.

Anhydrous ammonia is very unstable, and if its temperature is not properly controlled it will explode or form a deadly gas. One good thing about ammonia is that its sharp, irritating odour makes for an excellent warning.

Anhydrous ammonia is a strong alkali that can cause painful burns. It can burn by freezing as well as by caustic action. Even mild exposure can cause irritation to the eyes, nose and lungs. Prolonged breathing can cause suffocation. The water-absorbing nature of ammonia causes the greatest injury, especially to the eyes. Permanent damage can result.

In case of accidental exposure, water is the most important element in first aid. Eye treatment must not be delayed. Carry a plastic bottle of fresh water in your pocket for instant flushing of your eyes until you can get to a larger supply of water such as a 20-litre container mounted on your vehicle.

Wear rubber gloves and chemical splash goggles. Goggles for use with grinders and other tools are not sufficient because the air vents will allow ammonia to get behind the goggles. Be sure to wear the proper personal protective equipment (PPE).

Suppression crews who feel they may be in a potentially dangerous situation involving a meth lab should immediately pull back to a safe distance and notify the proper authorities as well as their dispatch centre.

If you suspect a meth lab, report it to your Incident Commander at once. Do not open any coolers. Do not touch any items.

Breathing in the gases can necessitate sending you to the hospital.

"Until next time, stay safe out there and remember to train like their lives depend on it… because they do." –  Ed

As the holiday season is soon upon us, we at Canwest Fire wish you all a Merry Christmas.

Ed Brouwer is the Fire Chief/Training Officer for Canwest Fire and a
member of the Osoyoos (B.C.) Fire Dept. The 18-year veteran fire
fighter is also a Fire Warden with Ministry of Forests, a First
Responder III instructor/evaluator, Local Assistant to the Fire
Commissioner and a fire service motivational speaker and chaplain.
E-mail ed@thefire.ca .