The BC Wildfire Service uses a ranking scale from one to six to quickly describe fire behaviour based on a set of visual indicators. 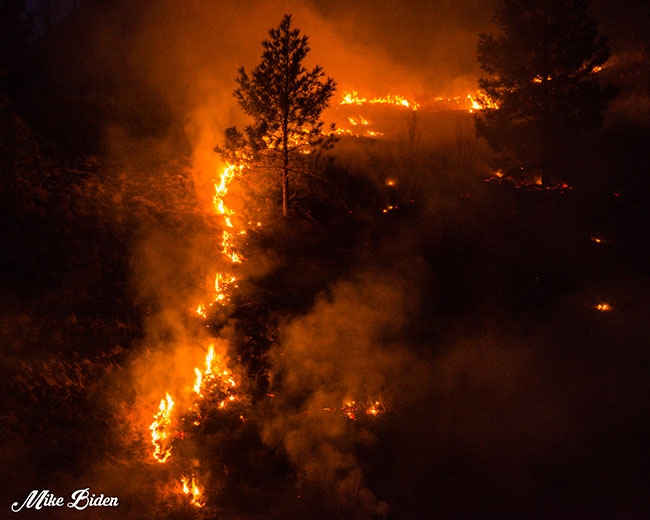 Canadian Wildland Fire Information System defines Rate of Spread (ROS) is the predicted speed of the fire at the front or head of the fire (where the fire moves fastest) and takes into account both crowning and spotting. The BC Wildfire Service uses a ranking scale from one to six to quickly describe fire behaviour based on a set of visual indicators.

Unless you are familiar with wildland fire behaviour you may not understand what a “moderate rate of spread” looks like on the ground.

Canadian Wildland Fire Information System defines Rate of Spread (ROS) as the predicted speed of the fire at the front or head of the fire (where the fire moves fastest) and takes into account both crowning and spotting. It is measured in metres per minute and is based on the fuel type, initial spread index, buildup index, and several fuel-specific parameters such as phenological state (leafless or green) in deciduous trees, crown base height in coniferous trees, and percent curing in grasses.

Simply put, ROS is the rate at which a fire is extending its horizontal dimensions. It is the speed with which the fire travels across the ground or through the bushes and trees. Properly estimating rate of fire spread is a key element in planning for effective fire control.

It is of great importance that firefighters understand the three factors that affect ROS: topography, fuel and weather.

■ Topography: Slope, Aspect, Terrain
Slope is the angle of incline on a hillside. The steeper the slope, the faster a fire burns. Higher on the slope ahead of the fire, the fuels become heated by radiant and convection heat currents. Burning material on slopes can also roll downhill to start other ignitions.

ROS can be greatly influenced by the degree of slope on which the fire is burning. ROS doubles (roughly) for every 20 per cent of slope increase.

To illustrate this, take a long wooden match and after lighting it hold it straight up. The flame burns evenly and there is little rate of spread. Now begin to angle it down, as you do, you will see the flame length grow and spread quickly up the unburnt portion of the match stick. The steeper the angle the greater the spread (the flame is also pre-heating the unburnt flame, causing it to ignite quicker). Fuels that have been pre-heated require less additional heat energy to reach their ignition point

Aspect describes the direction in which a slope faces in relation to the sun. More direct sunlight generally falls on the south and southwest slopes, with resulting higher temperatures, lower humidity, lower fuel moisture and sparser and lighter fuels. These areas are critical in terms of wildland fire starts and spread. North aspects of slopes are more shaded and have more fuels that are heavier. This shady side has lower temperatures, higher humidity and higher fuel moistures.

Terrain includes land variations such as canyons and ridges. A narrow canyon can cause radiant heat to raise the fuel temperature on the opposite slope, drastically increasing the chance of multiple ignitions

■ Fuel: Moisture, Size, Spacing, Fuel Loading
ROS is directly affected by the change in fuel types. Forward rate of spread doubles as a fire front moves from heavy fuels to lighter fuels. Slash to timber (doubles), timber to brush (doubles), brush to grass (doubles). When a fast-moving fire burns from light flashy fuels, into an area characterized by heavy fuels, the ROS will most likely slow down.

■ Weather: Wind, Relative Humidity, Temperature
Wind is a major factor affecting the rate of spread. Rate of spread doubles for every additional 16 kph (10 mph) of wind.

30/30 cross describes the condition where the RH drops below 30 per cent and temperature rises above 30 degrees C. If this occurs on the fire line you should expect extreme fire behaviour. Plan accordingly.

Increasing temperature also increases the effects of convection currents. But the most important consideration is that heat contributes to the drying of fuels, and dry fuels are easier to ignite than moist fuels.

■ Evolution Idea
One way to get these points across to your members is to set up an ROS scenario. You will need a large field, 10 24 inch long wooden stacks, nine rolls of flagging tape and four volunteers (not necessarily firefighters) to be the fire. At the edge of the field hammer the wooden stakes about 10 feet apart (this will be the fire’s ignition point). Using one roll of tape string the tape from the first stake to the last (wrap it a few times around each stake to keep it in place). Give volunteers two rolls of tape (one is a spare) and have them tie on to one stake each, this should include the outside stakes, the fourth and the seventh. Their job will be to step out away from their stakes into the field (unburned area) unrolling the tape as they do so. The tape indicates the “growing fire.” One volunteer with a watch should call out “step” each minute after the fire starts. Each volunteer will take several steps (unrolling the tape as they do so) in respect to your desired ROS. For example, if the rate of spread is 10’ per minute then they would step forward three large steps (approximately nine feet) every minute unrolling the tape as they go. Then as soon as the next minute elapses and the sinal word “step” is shouted they again would step forward three steps.

This continues unless you as the Training Officer signify that the wind increases to 32 kph (20 mph) or that the slope has increased 20 per cent. In either case the ROS would double. So, then they would now step out 20 feet (six large steps) each minute. Have your “ROS Team” set up and ready to go. Dispatch your members and appropriate apparatus from your hall. Your “ROS Team” should be informed that they begin to step out their distances as soon as the responding members come into view.

Command is established and an initial size-up is conducted. The IC stages the apparatus and members are assigned tasks. All during this time the ROS team is still stepping out. Somewhere in this time frame I would increase the ROS due to a wind increase of 16 kph (10 mph).

Continue through this scenario, letting it evolve (please do not spray down the ROS team), but hose lines should be laid out and charged. Hopefully everyone will see the importance of staging your apparatus appropriately. Unfortunately, the apparatus can become an anchor in a useless position. And it is not unrealistic to have the fire just out of your hose lay’s reach. Consider that if the ROS is 15’ per minute and it takes you 10 minutes to do a size up and set up your apparatus and firefighters that the fire (ROS Team) has already moved forward 10×15’= 150’.

Summary: If the IC is unaware of the importance of reading the ROS he or she can end up a hose length short of the fire. Or worse yet, place crews in harm’s way.

Remember to train like lives depend on it, because they certainly do.