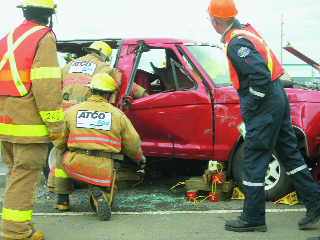 Vehicle extrication teams took part in the Alberta Vehicle Rescue Challenge and Learning Symposium, the first one held in that province in four years, and it was a valuable tool for municipal extrication teams in utilizing their technical skills and sharing information with fellow emergency service providers.

The event took place in Nisku, Alta., this past September, hosted by the Leduc County Fire Services and the Nisku Volunteer Firefighters Association, under the auspices of TERC Canada, the national organization that deals with transportation rescue issues, including education.

The competition component of the event saw teams involved in two scenarios, one using limited hand tools and the second, the unlimited event, using heavy hydraulic tools in addition to the hand tools.

“The Challenge provides us with an excellent opportunity to participate in a friendly yet competitive environment that promotes the sharing and learning of new rescue skills and techniques,” said Assistant Chief Darrell Fleming, the Alberta chair for TERC Canada.

In the Limited Pit competition, first place went to Mississauga, with second place earned by Cold Lake and third by Sundre. In the Unlimited Pit, Mississauga again took the top spot, followed by Leduc County-Nisku and Fox Creek.

The Top Medic Award was presented to Trevor Shea of Mississauga and the Top IC Award went to John Mann, also of Mississauga. The Sundre Fire Department earned the Team Spirit Award and the Calgary Cadets won the Innovation Award.

Judges from across Western Canada assessed each team’s performance and provided valuable comments to aid in improving the skills of the participating teams. John Goodman was the head judge in the limited event, assisted by Murry Bedford and Rick Wedderstrom (medical). In the unlimited event, Don Didychuk was the head judge, assisted by Greg McCelleand and Sean Fisher (medical).