Features
Are you sure the fire is out? 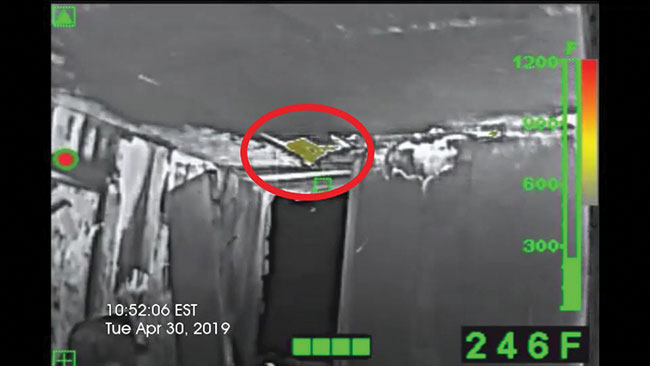 Being a firefighter is one of greatest jobs in the world. The sense of pride you get when you put on the uniform on your very first day and report for duty, to the time that you retire, is tremendous. But the various tasks that are required of you can be sometimes tedious and demanding and may not be your favourite, such as, conducting overhaul.

Once the main body of the fire has been extinguished, conducting overhaul is the next task, which is primarily searching for and extinguishing hidden fires or remaining hotspots. Other activities in overhaul include placing the building and its contents in a safe condition, determining the cause of the fire, and recognizing and preserving evidence of arson. Many of the tools used for overhaul are the same used for other tasks such as forcible entry and ventilation, which include pike poles, axes, prying tools and thermal imagers (TIs).

Using your senses
Before conducting overhaul of the structure, you must first ensure structural integrity of all the areas being searched. When searching for hidden fires, you should have a good understanding of general building construction to help you. Using your senses can aid you in the detection of hidden hotspots, which include:

When examining all the areas involved in the main body of the fire, also look for the possibility of any fire extension into other locations of the building. Scan all areas visually with your naked eye and with the TI, for comparison purposes. TI can help you find hidden hotspots in concealed spaces such as in below floors, above ceilings or within walls without having to open areas and visually inspect them. Thermal imagers should not replace your senses since a TI is only a tool and when in doubt, open the area of concern and investigate further.

Understand that there are some limitations in operating a TI, any reflective materials must be searched via the traditional methods to uncover any hotspots or fire. The TI cannot see heat through a cooler object so thoroughly check insulation areas. If there are any discrepancies between the image shown on your TI and signs of fire in a concealed space, the spaces should be opened and inspected visually.

The emissivity in the different building materials used in construction of the structure will also play a big factor when using your TI. The density of materials such as brick, concrete and certain types of wood all have a higher emissivity value which will take longer to cool down. Constant monitoring in certain areas of concern may apply as we do not want to create any more unnecessary property damage than is required.

Thermal imager information
When using your thermal imager for examining or investigating potential fires or hotspots, there is information that will be shown on your display screen that can help you determine what you are interpreting:

If your spot temperature measurement starts climbing when observing a certain area, it is good to take notice of that, especially if any colourization appears. Take your time scanning all the areas of concern as the imager operator needs to interpret what they are looking at before moving on.

Are you sure the fire is out?
So, you have now declared the fire to be out, overhaul has been completed, and you are packing up your equipment in preparation to clear the scene. Stop, take that one last walk throughout the inside and outside of the structure with your TI. If your TI has digital video record (DVR) capabilities, this is the time you want to use it for any preservation of scene evidence. Now you can have that peace of mind that you are sure the fire is out before scene departure.

Until next time, stay safe and practice often.

Manfred Kihn is a 19-year veteran of the fire service. He is Bullard’s fire training specialist for thermal imaging technology. He is certified through the Law Enforcement Thermographers’ Association as a thermal imaging instructor and is a recipient of the Ontario Medal for Firefighters Bravery. You can e-mail him at manfred_kihn@bullard.com.