Features Communication Training
Back to Basics: May 2019

We have looked at the last few months the issues with our personal protective equipment (PPE) in respect to not wearing it properly, not inspecting it properly and not having it ready to go when needed. We are going to move on to the next piece of our PPE and that is with the self-contained breathing apparatus (SCBA). 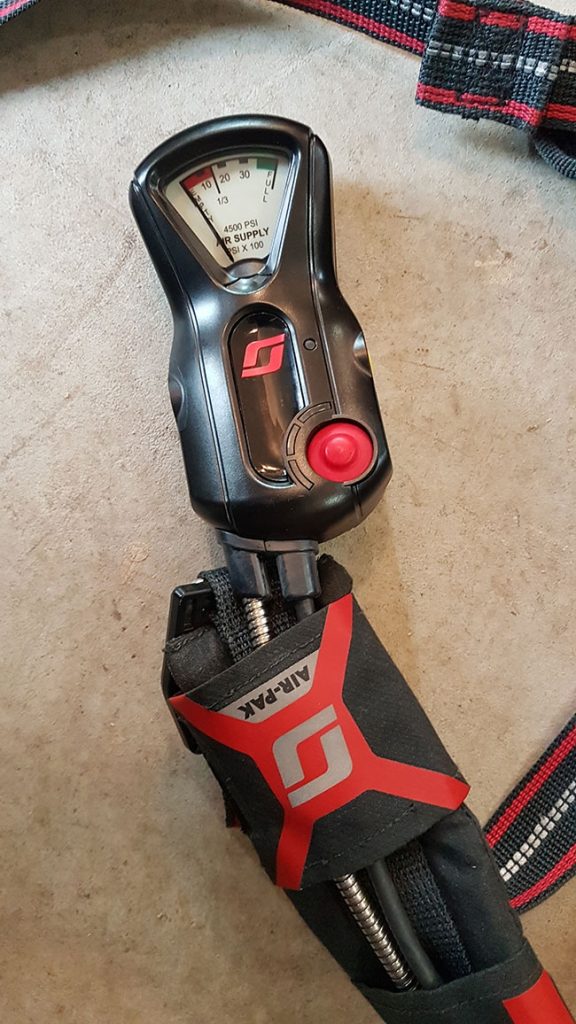 The chest gauge of the SCBA which contains parts of the PASS alarm. Firefighter and trainer Mark van der Feyst says the SCBA is the most important piece of PPE that any firefighter can use. The level of protection that it provides is unparalleled compared to the rest of our PPE. By Mark van der Feyst.

The SCBA is the most important piece of PPE that any firefighter can use. The level of protection that it provides is unparalleled compared to the rest of our PPE. Our respiratory system is the easiest to compromise and, when it is, it affects our ability to function.

One component of the SCBA is the PASS alarm. PASS stands for personal alert safety system. The PASS alarm was created and implemented so that a firefighter wearing the SCBA would be able to summon or alert others for help.

In the beginning, the PASS alarm was a manual device that was added to the SCBA. It required the firefighter to manually activate or arm the PASS alarm when he or she donned his or her SCBA.

Many firefighters lost their lives in the line of duty with their manual PASS alarms turned off and not activated. As a result of this inaction, the manufacturers of SCBA decided/were instructed to make the PASS alarm a redundant component of the SCBA.

A redundant piece of equipment refers to automation. In terms of the SCBA, once the SCBA cylinder is opened with air entering into the SCBA system, the PASS alarm is automatically turned on or armed. There is no way possible for the user to deactivate or disable the PASS alarm at any time when donning the SCBA and breathing off it. This automatic function ensures that when the user needs to summon or alert others for the call of help, the device will do so without fail.

I want to stress the fact that the PASS alarm has been designed and added to the SCBA for the sole purpose of assisting the user by calling for or alerting others for help – that is its only function and purpose. No matter what location the firefighter may be in or around, outside or inside the structure, outside at a vehicle fire, or wherever, when it goes off automatically or by manual means, it is doing so to call for help.

So, having said that, how come we as a fire service still must deal with premature PASS alarms going off all the time?

There are two main issues with this; PASS ignored and walked away from, and the lack of response to the sound of them.

The chest gauge of the SCBA which contains parts of the PASS alarm.

First, too many times firefighters will take off their SCBA, place it on the ground, close the cylinder, bleed the system down to purge the residual air and then walk away from it, or just take it off and place it on the ground and walk away. The result is the PASS alarm going off 30 seconds later, with the firefighter having to run back to shake the pack for a while until he or she realizes that the yellow button must be pressed twice to reset the PASS alarm and then go through the proper procedures to turn off the SCBA.

We also see many firefighters not being aware of their own PASS alarm going off when they are wearing their SCBA. Whenever they are standing statically for a while, the PASS alarm goes into the pre-alert sequence before going into full alarm and the wearer is not aware that it is their PASS alarm going off. This can be due to the sound emitting from the back of the SCBA being muffled by the firefighter’s coat or the individual being on air, breathing from the SCBA and not being able to hear it right away.

Regardless, the firefighter needs to be aware of his or her equipment and this includes ensuring the PASS alarm does not go off prematurely or by accident.

These types of premature or lazy activations only contribute to the second issue, which is the lack of response to the sound of a PASS alarm going off.

It is amazing to witness a PASS alarm sounding and nobody reacting. The unfortunate aspect of the first issue is the production of non-reactions to the PASS alarm. It has become the fire services “car alarm” going off with people not paying any attention to it.

The reaction of other firefighters needs to be changed, so that whenever a PASS alarm is going off they are looking to see where it is coming from and who needs help. That reaction is the intended reaction for the PASS alarm – not ignoring it.

For the times that it is a premature activation or an accidental activation, the other firefighters need to correct the problem by reminding the individual the importance of the PASS alarm and any false activations will not be tolerated.

Mark van der Feyst has been a member of the fire service since 1999 and is a full-time firefighter in Ontario. Mark teaches in Canada, United States and India, and is a FDIC instructor. He is the lead author of the Residential Fire Rescue book. Contact
Mark at Mark@FireStarTraining.com.