Fire fighters use 500 gallons of foam over 13 hours to extinguish stubborn fire in fishing boat; damage estimated at nearly $800,000 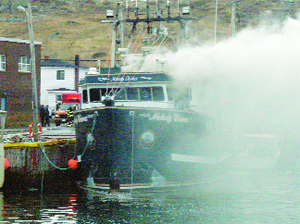 Several fire departments from the Conception Bay North area were in Harbour Grace to take part in a motorcade welcoming Canada’s Olympic curling representatives, when a call for assistance came into the Spaniard’s Bay and Bay Robert’s fire departments. The call, placed at approximately 3 p.m. on Saturday, Jan. 14, 2006, reported a fishing boat fire at the marina in the town of Port de Grave.

Bay Robert’s and Spaniard’s Bay Volunteer Fire Departments responded to the call. Upon arrival at the wharf initial attack teams found the 65-foot fishing vessel Melody Chimes on fire with smoke coming from the exhaust vents and from the top of the wheelhouse. Vessels are commonly docked two or perhaps three, side by side at the wharf. The Melody Chimes was docked between two other vessels. The fishing season is closed so these boats are tied up at Port de Grave for the winter. All crews are either laid off for the season or have moved on to work elsewhere.

Fire fighters had to cross one boat to get to the fire. With the outside boat moved out of danger, fisherman, attempting to move the inside boat out of danger pulled the attack team’s 1-1/2" line out of their hands and one fire fighter was injured when he was struck in the knee by the nozzle. Flames and smoke spread through the galley and wheelhouse of the stricken vessel.

The vessel was constructed of fibreglass over wood, common to fishing boats, and the fire sent thick toxic smoke from the scene to neighbouring houses. Smoke blanketed homes down wind from the fire scene prompting several to be evacuated. Fire fighters battled the blaze for 13 hours and it wasn’t until early Sunday morning that it was declared under control. It was Sunday afternoon before fire fighters were able to enter the vessel to remove planks and timbers to check for any hidden flames. Over 500 gallons of foam were used in the battle to contain and extinguish this blaze.

Joining  the 25 members of the Bay Robert’s Fire Department was the Spaniard’s Bay Fire Department bringing with them 18 fire fighters, their front run pumper, their equipment van and their mobile air compressor to fill spent SCBA cylinders. Because these two towns’ entire complement of equipment was tied up at the scene in Port de Grave, The Upper Island Cove Volunteer Department was dispatched to the Spaniard’s Bay station and placed on stand-by.

Canadian Coast Guard and Transport Canada officials were also on the scene and a boom was placed around the Melody Chimes to contain any leaks and oil run-off that may have occurred. Trinity Conception district RCMP on the scene said the vessel appears to be a total loss and estimate the value to be approximately $800,000. Members of the RCMP and the Fire Commissioners Office were continuing there investigation and say the cause is yet undetermined.

Melody Chimes was the scene of a fire three years ago, docked in Port de Grave then also. The vessel is 65 feet in length and draws 13 feet of water. The vessel had two 800-gal. fuel tanks forward and a 30-gal. tank of hydraulic fluid on board. After dispensing the 1,000 gallons of water on the front run pumper, fire fighters set up three portable pumps to feed the pumper providing five attack lines and the deck monitor to the attack crews.

The departments
The Bay Robert’s Vol. Fire Dept. has 30 members, seven elected as officers. It responds to approximately 100 calls per year. They have a full set of rescue/extrication tools, are equipped for high angle rescue and are currently preparing to form a coldwater rescue team. Apparatus includes a 2003 840-Igpm (1,000-gal.) pumper with foam capability, a 1993 840-Igpm (800-gal.) pumper, a 1997 4×4 rescue truck , a 1989 4X4 high angle rescue truck, a 1992 rescue/equipment cube van and a 1942 Ford pumper, which is used as a parade vehicle. The department provides fire and rescue protection to a community of 7,000 in 32 sq. km. and provides rescue/vehicle extrication for approximately 60 sq. km., servicing a total population of 17,000.

The Spaniard’s Bay Fire Dept. serves the communities of Spaniard’s Bay and Tilton with a population of 3,800 residents. The department, under the direction of Fire Chief Jamie Seymour and Assistant Chief Wally Crane, consists of 29 volunteer members. On the apparatus roster is a 1999 (1,000-gal.) pumper with a Hale computerized Foam Master system, a 1994 rescue/air supply cube van and a 1985 4×4 water rescue unit.