March 2016 - A college in British Columbia has developed a program to help first responders learn to be more resilient. 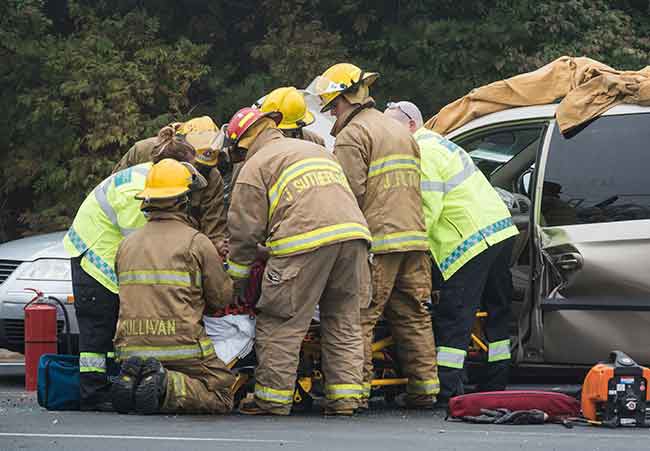 The college, led by healthcare faculty member Ruth Lamb, built its program based on 15 years of clinical experience using resilience-based practices that self-empower. The resilience program is taught in three-day sets over about six months, and was first held last fall. The University of New Brunswick plans to bring the program to its campus starting in September.

David Gillis, a 10-year firefighter in British Columbia and a three-year member of Royal Canadian Marine Search and Rescue, is one of 15 students who participated in the first semester of the resilience course.

■ DAVID
In July 2013 I attended a cardiac-arrest call to assist paramedics who were already performing CPR on a slim, elderly male. Although this was a fairly routine call, it turned into something far more impactful for me.

As I walked up the stairs and approached the victim, I was struck by an odour that triggered a response in me for which I was not prepared. That odour took me back six years to an extremely traumatic event in June 2007, during which a person had also voided. The odour triggered a memory that screamed for my attention and I fought to maintain my composure. Later, when I was able to take a break from compressions, some of the old memories and emotions from six years ago started to surface. I couldn’t let that happen – not then. So I did what I usually do and told myself to suck it up, deal with it and move on. Then I went back to doing compressions.

■ RUTH
David was experiencing an involuntary, reflexive flashback fragment of trauma triggered by odour. Although he rightly at the time denied the experience, his body still underwent hormonal, emotional and physical responses that he could not control. David’s traumatic experience stacked onto his other trauma experiences and, while out of his conscious awareness, the experiences took their toll on his body and mind.

Research provides ample proof that some firefighters are negatively impacted when facing high-stress trauma incidents over time, and others cope relatively well. However, it seems that few firefighters understand how important it is to reset and calm their nervous systems as they face one impactful call after another. How many firefighters know how to release stress and built-up tension between calls?

Residue from trauma experiences are unconsciously stored in a body’s tissues, including the nervous system, immune system and endocrine system. As doctor Bessel van der Kolk explains in a 1994 paper on the psychobiology of post-traumatic stress, repetitive invasion of other people’s traumas can, consciously or unconsciously, subtly drain a person’s vital energy, impact personal feelings, beliefs, values, judgements and relationships.

Repeated exposure to trauma impacts firefighters over time. A college in British Columbia is offering a program that teaches first responders how to build strong

It is amazingly easy for firefighters to place their nervous systems on high-push or to keep them at high levels of arousal, and forget to step back and recalibrate. It is equally as easy to shut down or self-anesthetize and to ignore body sensations by keeping constantly on the go or using substances to cope with continuous, even subconscious anxiety. The toxic power of trauma and stress keeps individuals in hyper-motion and hyper-vigilance mode – symptoms include irritability, insomnia, critical mindedness, restlessness, anxiety, panic and nightmares – or hypo-active mode – symptoms include low moods, cravings for sweet foods or dulling drugs, fatigue, amnesia, avoidance, feeling numb or as if in a fog. These are just a few of the emotional-psychological defensive reactions that can arise from traumatic stress. Constant stress leads to inflammatory (often painful) conditions. What is more, when tested, individuals with post-traumatic stress disorder had high amounts of inflammatory markers, which show that subtle inflammation processes are underway. Symptoms of inflammation vary, but painful gut is common.

The body’s sensory and hormonal systems hold trauma imprints and can get stuck in trauma-alert mode, which means that psychological and physiological defences stay engaged. The nervous system can hijack a person’s preferred response locking him or her in a trauma-response or shock mode.

For David, he had talked about his previous traumatic experience and theoretically understood what was happening to him, but talking about it did not heal the primal body reactions that were unconsciously triggered when he smelled certain odours during a call. David needed to diffuse his nervous-system activation and stop his actual behavioral response.

■ DAVID
What happened next was something I didn’t pay much attention to at the time, but now am very thankful I witnessed. I was doing the last set of compressions on the man when the protocol ended and we were instructed to stop CPR. Equipment was removed and somebody handed me a blanket to use to cover the victim. The paramedic, who had been giving the breaths, gently closed the victim’s eyelids and said a few words very quietly and softly to him. I don’t remember his exact words but they were quite simple and had no obvious religious overtones – something like, “Rest well, old timer.”

What occurs to me now is that regardless of the reason the paramedic said those parting words, it was a show of compassion, connection, kindness, love and respect. Those words not only honoured the victim, but may very well have provided just enough emotional relief and support to the paramedic to allow him to feel less traumatized and more resilient in the face of this event and the effect it may have had on him then and in the future.

■ RUTH
Unhealed, denied emotions make us sick. When these emotions are pushed deeply into the unconscious they stack up and take their silent toll on our lives. The paramedic’s heartfelt, compassionate statement surely helped him to recalibrate his nervous system and, in a manner unique to him, name and release his sorrow caused by a human’s passing.

■ DAVID
I believe that we need to be training first responders on how to increase their resilience and endurance for trauma through knowledge, awareness and reflection. We need to better equip responders to recognize when they or those with whom they work have been overexposed and require help. We need to find a new way of looking at and managing our traumas from the past and present, and to prepare for the future. We need to look at new ways of experiencing and processing trauma through insight, balance, grounding, emotional flexibility, compassionate connection to ourselves and others, and body-mind awareness.

Did anybody really explain to you what you were signing up for? Were the words “exposure to trauma” in your job description? What about “risk factors” and “propensity for PTSD”?

Langara College’s resilience program has introduced me to a new way, a better way, to experience and manage trauma. Knowledge, awareness, and reflection of course content has allowed me to put into practice a new model of self-help and well being. I believe non-invasive, non-chemical and self-empowering strategies such as powerful breathing techniques, qigong exercises, yoga, meditation and a greater awareness of my body and how I actually feel, plus reading and research, have helped me build, strengthen and expand my resilience. I have benefited from experiential learning and dynamic face-to-face group participation with a cohort of learners and instructors, who are either wearing or have been in our shoes in some capacity or another, in a safe and secure environment.

A few years ago if the duty officer, company officer or a fellow firefighter had noticed that something wasn’t quite right with me on scene and asked if I was OK, I would have just responded with, “Yeah, I’m good”. Now I think about things such as what that paramedic said to the victim – rest well, old timer – and I think about resilience. I think about a different way for me and other first responders to deal with trauma. We need to embrace a new way of resisting PTSD, a better way, because the old way wasn’t working – at least not for me and not for the people close to me.

■ RUTH
It is time to acknowledge that chronic exposure to trauma and stressful conditions can interfere with how firefighters cope on a daily basis and over time. Dare we ask: what do firefighters need to know to keep their high-powered careers on track? Are firefighters willing to be the trailblazers who take steps to protect their mental health and wellbeing, and, by doing so, support their professional excellence?

If the response is yes, then healing the nervous system through a slow-paced, non-invasive and self-empowering process that teaches firefighters how to safely access, contain, acknowledge and release stored overcharge-imprints from trauma experiences is the answer. These processes help individuals take back their lives. Their body-minds will then have strong and resilient nervous systems – ones that can cope with high-stress careers and provide absolutely essential services for their communities.

The nervous system heals slowly, habits soften slowly and behaviours change slowly. Releasing trauma imprints safely is part of a slow consciousness-based and awareness-focused process. The process counters the stacking of trauma in the tissues and nervous system. Firefighters more commonly cope with stacked trauma by using defense mechanisms or substances of any kind in order to just keep on going. Understandably, statistics show that many first responders do not want a diagnosis and to face the stigma, therefore they cope through denial until they are overwhelmed.

A leader in the first responder community recently said at a WorkSafe B.C. event, “Once someone is diagnosed with PTSD they are placed on medication and we never see them again.” How does this serve first responders, their teams, and their communities? Instead of focusing on disease or diagnosis and medicating natural human responses to crisis situations, education for primary prevention and resilience strategies could be the priority.

Learn more about the Strategic Resilience for First Responder program at www.langara.bc.ca/resilience

Ruth Lamb, PhD, is a program co-ordinator at Langara College. Email her at rlamb@langara.bc.ca
David Gillis is a firefighter in British Columbia. Contact him at dgillis512@gmail.com
Print this page