August 2016 - On Jan. 4, at approximately 11 p.m., Puslinch Fire and Rescue Services was dispatched to a barn fire at Classy Lane Stables boarding and training centre located on Concession 1 in Puslinch, Ont. 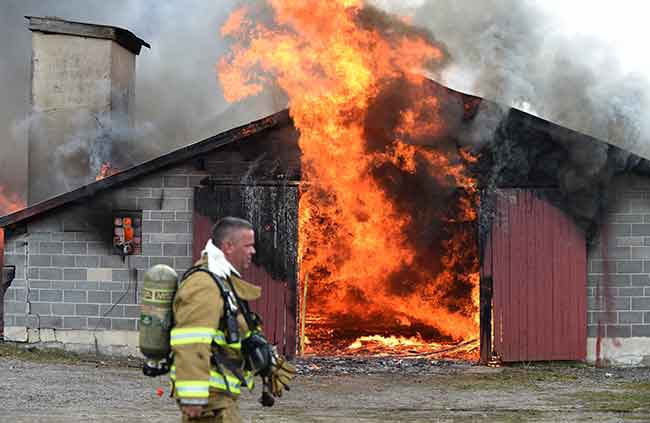 Puslinch Fire and Rescue Services partnered with the University of Waterloo to learn about fire ignition and spread in barns. Editor’s pick 2016: No. 2 - A barn fire in Puslinch

Responding firefighters could see an orange glow in the sky from kilometres away and knew it was going to be a long night. Upon arrival, crews found Barn 1 fully engulfed by fire. The one-storey barn made of wood and metal was 23-metres wide and 49-metres long. Aerial and pumper trucks were quickly set up and a water supply was established. A rural water tanker shuttle provided more than 600,000 litres of water to fire suppression crews throughout the night.

Four other fire services – Hamilton Fire Department, Cambridge Fire Department, Guelph-Eramosa Fire Department and Guelph Fire Department – joined Puslinch in the response to the barn fire. The incident commander and 45 firefighters did an exemplary job protecting the three other horse barns on site while dealing with the extreme-cold weather. Crews were able to prevent fire spread to barn 2, located close to barn 1, but could not save barn 1. There were 43 racehorses inside barn 1; all were killed. The fire caused $3.2 million in damages, and is the largest loss from fire in the township’s history.

The Ontario Office of the Fire Marshal and Emergency Management, with assistance from investigators with the Ontario Racing Commission and Puslinch Fire and Rescue Services, spent four days investigating the fire. Results from the high-profile investigation were expected to be released by mid-July.

This fire affected many Puslinch residents; almost everyone knows someone who worked at the barn or boarded a horse there. The trainers and owners of the horses were devastated. The fire also took a toll on the firefighters; fighting the fire was physically and emotionally exhausting, and it was heart wrenching to see the owners and trainers during the worst day of their lives. The impact of the fire spread to the horse racing community as well.

■ Learning from experience
A few months after the devastating Classy Lane fire, Puslinch Fire and Rescue Services was approached by a local farmer who offered his barn for barn-fire research.

Township of Puslinch fire department staff accepted the offer to burn down the barn for training and research purposes. This was an opportunity for firefighters and others to see a barn fire in the incipient stage (when heat, fuel and oxygen result in fire ignition), rather than halfway through when crews typically arrive on scene. The live-fire training would provide an excellent opportunity for firefighters to gain new skills and experiences. Puslinch Fire and Rescue Services staff worked in partnership with the University of Waterloo Fire Research Lab, the NFPA, and local insurance agencies to organize a live-fire barn research and training event.

On April 22, after months of preparation, we were ready to commence the live-fire research. Puslinch fire department members were very fortunate to be able to work with Beth Weckman and her team from the University of Waterloo’s Fire Research Lab. The research team set up cameras inside the barn as well as thermocouples at three different levels. The researchers recorded some amazing footage and data, including temperature measurements every minute.

Professional videographer Colin Smith and his team used cameras and drones to tape the burn from the outside. All the video captured will be put into two separate educational videos – one for the agricultural community to help educate barn owners, and another for fire services to provide analysis of the data.

The morning consisted of small burn cells happening inside the barn. The first cell was an electrical short and the combustibles on the floor ignited right away. The second cell was a discarded cigarette; during this test the cigarette took a while to ignite on the straw-covered floor, but eventually did so. Third test involved linseed oil rags – used to simulate oily rags discarded in a barn after use – which took the longest to ignite.

Onlookers including area residents and media were able to view each cell until it was complete, and then were asked to leave the barn and return for the next one. After lunch, at approximately 12:37 p.m., a small flame was introduced in the barn’s west central area.

Temperatures in the barn reached almost 1,200 C in a matter of minutes. Fire crews then opened the front door of the barn for onlookers and media to witness how the fire behaves during the incipient stage. At the four-minute mark the barn was fully engulfed. As the fire grew, I announced to the crowd the common timelines in the volunteer world.

“At the five-minute mark the fire service would be getting the first page.”

“At the nine-minute mark, firefighters would be at the station getting their gear on and hopping in the trucks.”

“At the 15-minute mark, firefighters would be arriving on scene and setting up to combat the fire.”

Onlookers and media could not believe how quickly the barn went up in flames; the intensity of the heat was felt from 30 metres away. At about the 15-minute mark the roof collapsed.

The test was completed in about one hour, although the barn continued to burn during the demolition stage. The tests were conducted successfully and from the data we will have a better understanding of the incipient stage of a fire in these types of buildings. Puslinch fire department members are still waiting for further data to be released by the university, but it takes time. The exercise proved immediately, however, that in the event of a barn fire, there is a limit to what fire services can do unless they are extremely close by, and even then the damage will be catastrophic.

Puslinch Fire and Rescue Services was very fortunate to be provided use of this barn for research. The barn’s owners, the Speers family, watched with excitement, as well as sadness; after 34 years on the farm, the family is moving. “If we can learn from this project,” Brett Speers said, “and others in the area learn from it, this is a good thing.”

Puslinch Fire and Rescue Services partnered with the University of Waterloo to learn about fire ignition and spread in barns.

■ Implementing safety
Just one week after the fire at Classy Lane Stables, owners Jamie and Barb Millier asked the department to make recommendations about how to make the barns safer. All four barns on the property are well maintained, with fire extinguishers, emergency procedures posted, first aid kits. Fire Chief Goode and I made several suggestions, including compartmenting the offices and service rooms to house the potential ignition sources; locating all appliances such as fridges in one room and placing closures on the doors to keep the room as a whole; installing detection alarms in all rooms and in the stall areas; and outfitting each barn on site with the same safety measures and zoning them in the detection system.

I also suggested the owner install sprinklers in the offices and services rooms; at Classy Lane Stables these rooms are heated so that there is no chance the sprinklers will freeze during the winter. The sprinklers would slow down if not suppress the fire should it occur in one of the sprinklered rooms.

The Milliers have since rebuilt barn 1, taking all of the suggestions to heart, and are working hard to install all the suggested measures. Classy Lane Stables will be leading the path for change once all the safety measures are installed in the new barn as well as the other barns on site, including an automatic fire suppression safety device called HAVEN (www.havenfiresafety.com) that uses dry chemicals.

Puslinch Fire and Rescue Services has learned a great deal about barn fires since Jan. 4. Chief Goode said that fire departments know there is information available for barn owners, however, fire personnel often do not to promote it. “We certainly are now,” Goode said.

Puslinch Fire and Rescue Services has come up with its own education program for area residents who have agriculture buildings. Firefighters will visit each agriculture operation in the township and will promote fire safety by handing out public fire safety guidelines and offering free inspection for the owner’s peace of mind. One of the items Puslinch staff handed out is a guide from the Ontario Ministry of Agriculture, Food and Rural Affairs called Reducing the Risk of Fire on Your Farm (find it on the ministry’s website: www.omafra.gov.on.ca). We have also created a check sheet for our members to refer to when conducting inspections at properties with agricultural buildings.

So far the program has received great support from area residents, and, in fact, we regularly receive requests from owners for department members to walk through their buildings and make fire-safety suggestions.

There has been a lot of media attention this year on barn fires in Ontario, which had led to a mistaken impression that there has been a higher-than-normal number of incidents. In fact, the number of reported barn fires has been decreasing since 2008 (see Ontario fire statistics sidebar). Bear in mind, however, that over the years many family farms have closed or transitioned to factory farms, for a lack of a better term. Because of the size of these large-scale livestock farms, more animals are likely to die during a major barn fire. Four separate barn fires in Ontario in January killed 56 horses, 500 goats, 30 cattle and approximately 2,000 pigs.

The National Research Council of Canada is behind a working group looking at making changes to National Farm Building Code of Canada, which was last updated in 1995. This is a good start to change. I have been very fortunate to have been granted the opportunity to be an observer for this working group, composed of many stakeholders in agriculture, construction, and fire services. Updates to the farm building code would be reflected in the 2020 editions of the National Building Code and National Fire Code. I strongly feel that there is a need for change, however, simple measures in place by property owners can reduce the fire numbers substantially.

Jason Benn is the chief fire prevention officer for Puslinch Fire and Rescue Services in Ontario. Email him at jbenn@puslinch.ca and follow him on Twitter @JasonBenn2