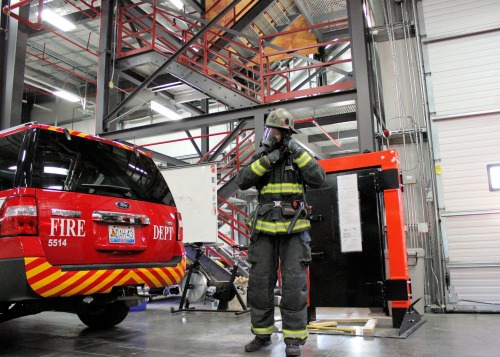 They gaze up and the tower, eyes reflecting an internal battle – fear of the physical challenge they are about to take on, but also determination.

An hour and 150 storeys later: sweat, exhilaration, soreness, triumph. Tomorrow they will do it again.

This is the scene Yukon Deputy Fire Marshal James Paterson describes in an interview about a voluntary fitness program he has been running out of the City of Whitehorse Fire Station 2 for about two years.

Five days a week, nine firefighters (and sometimes a city manager) join Paterson for an intense workout that targets their cardiovascular systems – gets their hearts pounding.

But why do they do it? What’s the motivation?

Mandatory fitness, particularly if it is punitive, is a hot-button political issue in the fire service, Paterson said, the effects of which he dealt with in the past as chief of the Yukon airport fire department.

When he took on the role of deputy fire marshal in 2013, Paterson explored other methods for motivating Yukon firefighters.

It’s a challenge, he admits, but he believes departments owe it to the community, and to themselves, to keep physically fit.

Setting goals
Maintaining motivation is the ever-present challenge for any voluntary fitness initiative. For the Yukon firefighters, Paterson said, the greatest motivator is having a goal that gives their workouts purpose.

The fitness initiative originally started as training for the annual Scott FireFit Championships – the Canadian version of the United States-based Firefighter Combat Challenge.

“In the past when I had run in the combat challenge,” Paterson said, “when I returned home to Whitehorse I just felt fantastic when I had to go fight a house fire. I felt bigger than the whole thing, and that I could handle anything that came at me. I wanted to bring that feeling to our volunteers.”

Paterson shared his passion with crews and as word grew about launching a new team for the combat challenge. With permission and support from the fire chief in Whitehorse to use station 2 as a base, Paterson started training anyone who showed up.

“More and more people came out and started to work with me and now it’s a daily event,” he said.

The group now has two teams signed up for FireFit, a team from Whitehorse with six members, and Yukon Fire Service team with Paterson and three volunteer firefighters from surrounding departments.

Competing in the FireFit championships may be the original motivator for the firefighters, Paterson said, but annual events in the community are essential to keep up day-to-day morale.

“It’s critical you have destinations,” he said, “you have things like the Terry Fox run, you have the Run for Mom, you have all those things where your firefighters are out in the general public . . . so that training is continuous and ongoing.”

Healthy hearts
At 51, Boyd Pyper is proud to be the oldest member on the team of mostly 20-something-year-olds.

Pyper is the fire chief in Tagish, Yukon, a small community an hour southeast of Whitehorse. He makes the trip in to Whitehorse four days a week to train with the team, then spends another few hours in the gym on his own.

Pyper said he was not a gym enthusiast before, but as a seasonal park ranger and what he calls a “classic Yukon cliché” who regularly camps, hunts and fishes, he leads a relatively active lifestyle.

“But I’ve never really pushed myself or challenged myself the way I have in this last six months training,” he said, “and I love it. I’m a little bit hooked.”

Another part of what drives Pyper to exercise is remembering his predecessor, Kurt Gantner. Chief Gantner died in 2011 at age 49 from cardiac arrest, the day after responding to a house fire.

Months before Gantner’s death, Yukon adopted presumptive legislation that includes cardiac events. If a firefighter suffers cardiac arrest within 24 hours of an emergency scene it is considered in the line of duty. The International Association of Firefighters (IAFF) lists similar legislation in Alberta, Manitoba, New Brunswick, Northwest Territories, Ontario and Saskatchewan.

Paterson also spoke of Gantner’s death, calling it a wake up call for the Yukon fire service.

“This job is a physical job, make no mistake,” he said. “Chief officers shouldn’t be excluded because it’s a tremendous amount of stress put on their hearts and their minds when they are woken up at 2 a.m. and have to make a huge amount of command decisions in a very short period of time; that elevates your heart rate instantly.”

Sudden cardiac events are recognized by the IAFF as one of the top killers of firefighters in Canada and the United States. Paterson points out that cardiovascular issues are “precipitated by lack of fitness and lifestyle choices.

“I don’t believe we should be losing our members from cardiovascular emergencies that are – for the most part – preventable,” he said.

Leadership and support
Whitehorse Fire Chief Kevin Lyslo is 100 per cent behind the fitness program running out of station 2 one hour a day, six days a week.

The fire service is changing, Lyslo said, and part of that change is a focus on the physical health of its firefighters. Chiefs need to encourage that change, he said, especially in volunteers.

“Being physically fit from the time you start to the time you leave is going to impact your retirement years, ” Lyslo said. “To have this opportunity for our new guys to participate, it keeps them involved with us and I think it creates a better volunteer who is more engaged and physically fit.”

As a chief, Lyslo said, the best thing you can do to motivate your crew is lead by example.

“If a chief is not willing to get out of his chair and do the five-k (run),” he said, “or even run the stairs with them while they’re training for their challenge, if he’s not willing to mirror that, he should not expect anyone else to.”

Lyslo isn’t on the team, but he rides his bike or runs to work everyday, year round, with a cutoff of around -30 C.

Pyper also hopes that his participation in the FireFit challenge and overall enthusiasm for fitness will not only encourage his current volunteers to participate, but also attract new ones to the department. “We want to say, ‘Hey, I’m getting fit, I like doing these things and it can be a lot of fun,’” he said.

Determination
Paterson knows the intensity of the FireFit challenge isn’t for everyone, but recommends firefighters sign up for community events such as runs and cycles to motivate themselves.

And while most departments don’t have the resources to purchase fitness equipment, especially if they are volunteer, that shouldn’t stop members from exercising, he said. There are many inexpensive ways to keep fit.

His favourite are burpees – a mix of squats, planks and jumps that target the heart and lungs. Other options are sit-ups, push-ups, lunges, and walking or running outside.

At the end of the day, he said, choosing to exercise is a personal decision.

Paterson admits that he often struggles with his own motivation as he straps on his SCBA and lines up with his teammates at the base of the training tower.

“There’s a thousand excuses why I shouldn’t do it, or I don’t have to do it,” he said.