March 2016 - Public educator Tanya Bettridge has been to several seminars for her job over the years, but the latest one was different. 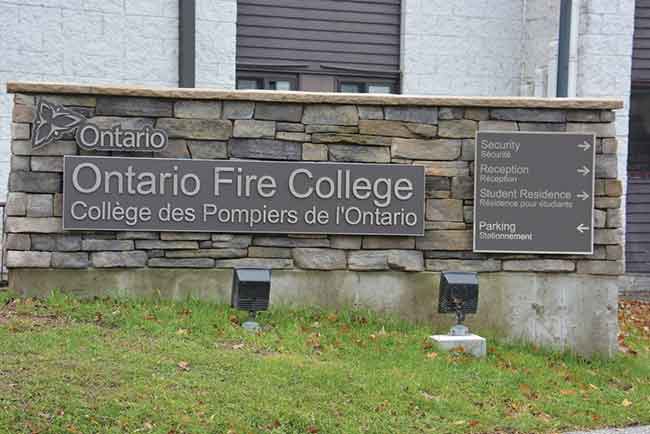 In late October, Bettridge entered the conference room of the Ontario Fire College in Gravenhurst, and sat down next to not just other public education officers, but also fire prevention officers.

For the first time, the Ontario Fire and Life Safety Educators (OFLSE) and the Ontario Municipal Fire Prevention Officers Association (OMFPOA) joined forces to organize a fall seminar that brought together the first two lines of defence.

Kevin Vaughan, fire prevention officer for Ajax Fire and Emergency Services, OFLSE director and co-organizer of the seminar, said public education is sometimes overlooked by the need for compliance.

“As an inspector, I’d say 85 per cent of my job is educating the public anyway, there is all that crossover,” Vaughan said.

Ontario’s 1997 Fire Protection and Prevention Act first established a framework for fire protection services that balance the three lines of defence: public education and prevention, fire safety standards and enforcement, and emergency response (suppression). Public education is No. 1, Vaughan said, and it has to be the first priority.

To capitalize on the crossover of public-education and fire-prevention personnel and subject matter, the public educators and prevention officers worked with the Ontario Association of Fire Chiefs and the Ontario Fire College to deliver theoretical and practical training during the first-ever combined five-day conference. Some sessions were plenary and others required the two disciplines to split up.

“Both groups worked hard together to bring in training opportunities that were good for, useable or transferable to both disciplines,” Vaughan said.

The attendees heard the best of the best public education and fire prevention successes to come out of the province.

For Bettridge, who is also an executive member of the public-educators group, the most noticeable difference between this seminar and all others was in the way the information was presented.

“It’s basically a week of sharing knowledge,” she said. “It’s not what the government feels is generic and politically correct, which is what we’re trying to get away from because it’s not working.”

■ Using research
Dave Lisle, director of research and education for the Toronto-based Technical Standards and Safety Authority (TSSA), gave one of the first plenary presentations of the seminar on risk communication in the fire service. Understanding how and why people make risk-based decisions is essential to create strategies that can change their behaviours, Lisle said in an interview.

“We know that in the end safety is a shared responsibility with us all having a role . . . but ultimately the public has a portion of that responsibility as well,” Lisle said.

Fire services can design public education programs that target certain audiences, he said, by understanding how people view their safety role and act on it, including where they get their information and what appeals to them.

One of TSSA’s major case studies is their provincial carbon monoxide campaign that was designed based on years of behavioural research.

“People need to be aware of the risk, they need to understand their role in managing it, and then you’ll have a chance that they’ll do something different,” Lisle said.

Lisle’s presentation was followed by a presentation from Ontario’s Durham region firefighters who used data from the TSSA to execute a safety campaign. Firefighters from Ajax, Clarington, Oshawa, Pickering, Scugog, Uxbridge and Whitby worked with Lisle to form their Get Real Durham campaign, which ran in each of the communities last year.

“They picked my brain and looked at the research results and used that to inform the way they designed their strategies, and then they executed it and measured the success they achieved,” Lisle said.

Over a two-week span, firefighters from each community targeted 1,000 households through direct phone calls, mail outs and door-to-door visits. Firefighters shared local fire statistics such as the total cost of structure fires, injuries and deaths in the past year.

Lisle has several other partnerships on the go within Ontario and said he welcomes new opportunities to work with fire services.

“I see a lot of progress in terms of people challenging the status quo and looking for ways to take knowledge and apply it and become that much more effective,” he said.

The organizations that support public educators and fire-prevention officers held a joint seminar at the Ontario Fire College last fall to capitalize on the crossover of personnel.

■ Keeping organized
Knowing where to begin and how to stay on top of public-education projects can be a challenge for firefighters. To help smooth the planning process, Denise Wallace and Chris Slosser, both program specialists for the Office of the Fire Marshal and Emergency Management (OFMEM), introduced free activity-tracking tools to both public education and fire prevention officers during the seminar.

The tools were designed with input from fire departments across the province to help public educators focus their efforts where they are needed in the community.

The first tool is an activities planning and tracking spreadsheet in Excel that requires users to identify risks in their communities and then plan activities throughout the year to target each audience at risk. Built-in formulas tabulate a running total of the number of activities completed, such as news releases sent out, presentations given or homes visited.

“Those annual totals allow you to go back to your chief . . . and say, ‘Here’s how we’re spending our time or here’s what we’re focusing our resources on and you can show just how effective you are being in your community,’” Slosser said.

The second tool is an annual-report template that allows officers to fill in details about what education efforts they accomplished within any given year.

“It’s really flexible so you can delete, revise, add in – whatever fits in for your community,” Wallace said.

Presenting the tools to both pub-ed and fire-prevention officers at the joint seminar was ideal, Wallace said, to reach as many educators as possible, including those who fill both roles. Both tools are publicly available and free to download from the OFMEM website.

■ Pushing the envelope
A pub-ed shift is happening, Bettridge said, and the seminar was a start.

“There was lot of talk all week,” she said, “that we need to stop looking at what the fire service needs from the public and instead turn that around – what does the public need from us?”

The old style of repeatedly asking people to be fire smart is not effective, she said. But there are ways for the fire service to make people want to change their behaviours, and it means tapping into what they want.

“It’s marketing – that’s what it comes down to,” Bettridge said.

As a public educator and administrative assistant for Perth East and West Perth Fire Departments, Bettridge was one of several Ontario fire-service presenters who shared stories of successful programs in their communities. The presentations came from both public education and fire prevention sides.

“It comes down to sharing,” Bettridge said. “If you’re an FPO, but you have a great public-education program, why wouldn’t we invite you to present and share?”

Ryan Betts, acting manager of public safety education for the OFMEM, agreed there has always been a crossover of attendees at past conferences run for one or the other discipline.

“I think it’s important for educators to have an understanding of the legislation and what the fire code says . . . and it’s good for the inspectors and the prevention folks to have that exposure (to public education), because, in my mind, even an inspection is an educational opportunity,” he said.

The OFMEM has, for years, Betts said, tried to address local issues by approaching them with all three lines of defence. While there is not a specific focus to design combined approaches, working inclusively is more “front of mind,” he said.

The seminar was well received from all sides, Vaughan said, and the next one is already in the works and will be held once again in the fall at the Ontario Fire College.

“From the OMFPOA or the OFLSE all the way up to the Ontario Association of Fire Chiefs, they were ecstatic with how it went over,” he said. “It was a good value.”